Fears of a second coronavirus wave/renewed lockdowns, a focus on lack of progress on US fiscal aid, together with a slew of Fed speakers that underlined the need for more fiscal stimulus and pre-US election nerves, all converged last week to create an environment of broad risk aversion that left EM stocks, currencies and bonds suffering their worst week since the coronavirus rocked global markets in March.

The MSCI Stocks Index fell to 2-month lows and has returned back on to a softer footing ytd, whilst the EM the currency gauge more or less erased its September gains as the Dollar hit 2-month highs in a continuation of its safe heaven inspired revival. In addition, the premium investors paid to own EM sovereign debt over USTs widened back above 400bp for the first time in nearly 2-months (per the JPM EMBI), all of which can be seen in the dashboard.

Whilst EMs and wider risks assets have been subjected to bouts of risk aversion over the Spring and Summer, the general theme has, of course, been one of recovery (from March lows), supported predominantly by a wave of unprecedented monetary and fiscal stimulus. Yet, with the bulk of this stimulus having been delivered (rate cutting trend slowing) and data pointing to an uneven global economic recovery that is now looking increasingly protracted amid the Covid-19 resurgence, it may be the case that EMs are entering a period of weakness - or at very least, consolidation - as investors take some risk off the table heading into the looming key risk event that is the US presidential election.

Waiting for the dust to settle

Interestingly though, the flows data as tracked by our partners at EPFR, has yet to raise any alarm bells despite the fast approaching US election and prospects of a second wave coronavirus. In fact, as can be seen in the dashboard, YTD net cumulative outflows from EM equities (which have been in place since March) appear to have stabilised in recent weeks, hovering just off worst levels recorded at the start of September, whilst YTD net cumulative outflows from EM bond funds have continued to moderate (to ca. 5% in AUM terms vs more than 8% back in the Spring). This would all suggest the worst for EM assets is still considered to be behind us.

From what we can tell, many analysts expect the recent turn in fortunes for EMs and wider risk asset to create, in time, a potential opportunity to buy EM assets at cheaper prices, a view that is predominantly based on the expectation of the eventual development of a Covid-19 vaccine and a China-led economic recovery. As UBS recently suggested, China's credit impulse has been very strong and historically, with a lag, that filters through to the rest of EM.

Economic data of late has shown that both consumers and producers in China are recovering from the coronavirus pandemic (recall, in August china's retail sales rose for the first time this year and IP increased for a fifth straight month) and according to Ipsos, China continues to lead the worldwide improvement in consumer sentiment, standing out in September at 70.9 compared to 41.8 for the Global Consumer Confidence Index. Not only does China's National Index remain higher than that of any other country surveyed, but higher than it was pre-pandemic (see the dashboard for a reduced country list of results).

Changing tact from a more defensive stance on EM assets based on the above, of course, involves waiting out US election volatility and taking a view into 2021, when the cyclical outlook for the ex-China group is generally expected to start improving.

At present, the market also remains vulnerable to the unrelenting surge in coronavirus cases around the globe that has left India passing the milestone of more than 6mn confirmed cases, placing it second to the US, whilst record cases have left the Czech Republic one of the virus hotspots in Europe. All the while, Latin America remains the most affected region worldwide and with Brazil, Chile, Colombia and Peru continuing to count double-digit thousands of new cases daily.

Also encouraging a move to the sidelines are mounting geopolitical risks aligned to Russia/Belarus, Turkey/Greece, and most recently, the territorial dispute between Armenia and Azerbaijan that has erupted with the greatest clash in years and risks dragging their respective allies, Turkey and Russia into the mix.

This has all served to increase volatility and to this, we note the gap between implied volatility of EM currencies and their G7 peers is at the widest since June (see the dashboard). In the past week, G7 volatility has eased, although over the past month, the widening of the gap has been predominantly driven by increasing volatility in EMs.

Once volatility eases, then there is the question as to which EM assets could prove the most attractive. High yielding currencies such as the Mexican Peso, South African Rand and Russian Rouble standout, though with the latter likely retaining a degree of geopolitical risk premia, whilst in the fixed income space, bonds from single B rated sovereigns where external vulnerabilities are lower, such as Egypt, Ukraine, Kenya, Ivory Coast and Senegal, are all favoured. Sub-Saharan African bonds appear to be liked too, for the fact they have yet to price in a full recovery from the pandemic.

Opportunities to engage in fresh longs after US elections, potentially

So, whilst the EM outlook into year-end has started to look rocky, amid a combination of second wave coronavirus/renewed lockdown prospects and the fast approaching US presidential election, it is possible that a sell-off may present opportunities to capitalise on economic growth expectations in the coming months, once the dust settles.

It is worth highlighting a recent survey from HSBC, conducted between 11 August and 15 September, which identified that 71% of investors expected EM activity to accelerate over the next 12-months, nearly doubled from the first survey in June. 67% of investors expected EM equities to rise in the next 3-months, almost double that of the June survey and 55% said EM stocks will outperform DM peers. Breaking this down, Asia was seen as the region with the most favourable outlook across all asset classes – FX, rates, equity and credit – and with the best prospects for economic growth, whilst Latin America was considered to have the least favourable outlook overall. In currencies, CNY had most favorable outlook and BRL, TRY and ARS had the least.

On a broad EM FX basis, we have seen a correction in the MSCI EM Currency Index from September highs in recent sessions, but as the below technical chart highlights, the 6-month uptrend is still intact. For those looking to engage in fresh longs, we would suggest looking to buy dips towards the 1604-1616 area. Only below the 4 August low of 1604.35 would caution. 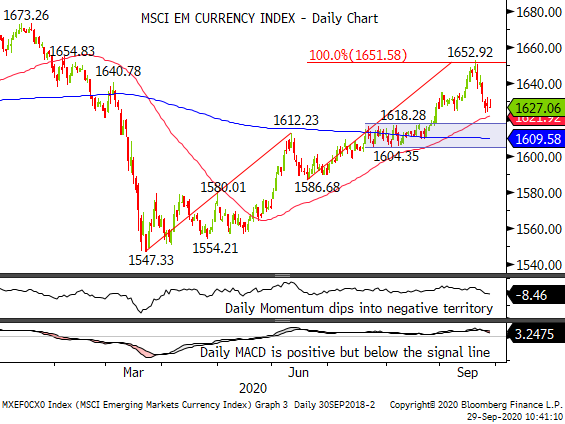