EM Viewpoint: Rouble risks to downside ahead of US election

11 Aug 2020 by Christopher Shiells
Topics: Industry News |
Provided by IGM FX and Rates |
Get a free demo
Login to IGM
Rouble has underperformed

The Russian Rouble dropped to its lowest level vs the USD since May 7 (see dashboard below) in early August (3rd) and to its weakest level since the end of March vs the Euro. This has been driven by external sentiment, which has included some shocking data out of the US and EZ, as well as fears of renewed coronavirus outbreaks in Europe.

In fact, over the same week the Rouble was the worst performing EM currency vs the USD (-5.0%) and the EUR (-7.0%). Over this time the EUR has seen broad strength, but the USD has been softer (DXY down ca 2,5% in this period), which suggests the RUB is being singled out by investors.

A short-term technical driver that can account for a large part of this underperformance is the equity-dividend season as investors rush to convert their RUB earnings from stocks into dollars.

However, CFTC data showed traders cut their net long positions on the RUB by 25% in the seven days through July 28 (see dashboard below), which suggests more of a long-term structural shift. One of the catalysts seems to have been a retreat by foreigners from OFZ holdings, which has seen the 10yr OFZ yield jump 14bp over the last week (see dashboard), prompted by the CBR's signal that the easing cycle is nearing an end and that near term price pressures could be higher. The EPFR data has been showing a slight pick up in inflows to Russian bonds since the beginning of June, but in the last couple of weeks this improvement has been slowing (see dashboard below). Another longer-term driver could be some early positioning for the US election in November, given the polls continue to suggest a win for the Democratic candidate Joe Biden, which it is assumed would lead to a tougher US stance on Russia.

This viewpoint explores the outlook for the Russian Rouble for the rest of this year. 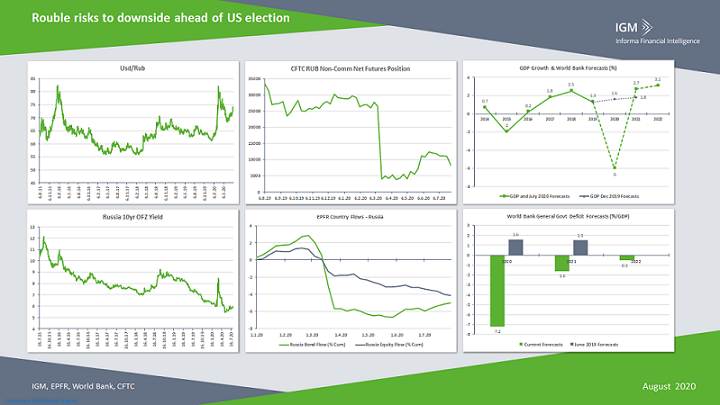 The COVID-19 pandemic has triggered a deep global economic recession and with it prices for crude oil, Russia's largest export, have plummeted since the start of the year, while oil demand is expected to decline by an unprecedented 8% in 2020 (World Bank).

Russia is heading toward a recession and according to the World Bank, there was negative growth in most sectors in 2020. Manufacturing contracted 10%, with severe negative impacts in metals production and transport vehicles and mineral-resource extraction decreased by 3.2%. Thus, the WB has cut its economic outlook for Russia. The baseline scenario suggests that Russia's GDP could contract by as much as 6.0% in 2020, an 11-year low. If containment measures are fully lifted in H2 2020, a moderate recovery could get underway and some positive momentum is expected to spill over to 2021, pushing GDP growth to 2.7% and in 2022 to 3.1%. This compares to the previous World Bank GDP forecasts of 1.6% and 1.8% for 2020 and 2021 (see dashboard above).

As a result, in late July Russia dropped its target of becoming one of the world's five largest economies. The goal has been left out of Russia's new social and economic targets announced in July. Putin also delayed a number of other goals to 2030 from the original 2024 deadline, including halving Russia's poverty rate and boosting life expectancy to 78.

The Covid-19 pandemic has resulted in reduced fiscal revenues for Russia. In the first five months of 2020, the federal budget registered a deficit of RUB406.6bn compared to a surplus of RUB1,283.3bn in the same period in 2019. The government expects to spend around RUB23tn this year, with the draft for next year's budget coming in at RUB21.2tn. Thus the general government budget is expected to turn to deficit in 2020-22, of 7.2%, 1.6% and 0.5%/GDP, respectively (World Bank). This has deteriorated from this time last year when the budget was seen running a surplus of 1.6%/GDP and 1.5%/GDP (see dashboard)

Looking ahead, Russia's Finance Ministry wants to cut government spending by up to 10% from next year in a bid to restore the state's finances following the coronavirus pandemic. It has proposed cutting a total of USD65bn from the Russian budget over 2021-2023, according to a Finance Ministry proposal. Russia has also delayed its flagship domestic spending programme — the USD360bn National Projects package — from 2024 to 2030.

However, the Russian government's response to the pandemic is small in comparison to developed market and developing market peers, and its budget deficit and debt levels remains relatively moderate vs these peers. The IMF has a Covid-19 fiscal measures data mapper here, which clearly shows Russia has one of the smallest fiscal packages to support the economy through this period.

On the face of it, the Russian economy has probably passed the worst point of decline as it has now emerged from lockdown and the government is in a rare position of having ample financial resources to fund further remedial actions.

However, in our opinion the looming US election means that risks for the Russian Rouble are still to the downside. The threat of US sanctions is never far away and the recent push to reactivate the “sanctions from hell" bill on the back of the Afghanistan allegations, shows the eagerness of many in the US Congress to pull the sanctions trigger. As long as Democratic candidate Joe Biden remains ahead in the polls for the Presidential election in November then the market will price in the increased risk of sanctions.

Also, with OPEC+ turning on the supply taps again, we do not see oil prices offering the RUB any further upside potential, especially as increased supply comes just as concerns over the global economic recovery intensify.

Thus, heading into the November US election we see upside risks to USD/RUB, with a potential to test 77.670, with support seen just below 70.500 (see technical study below). 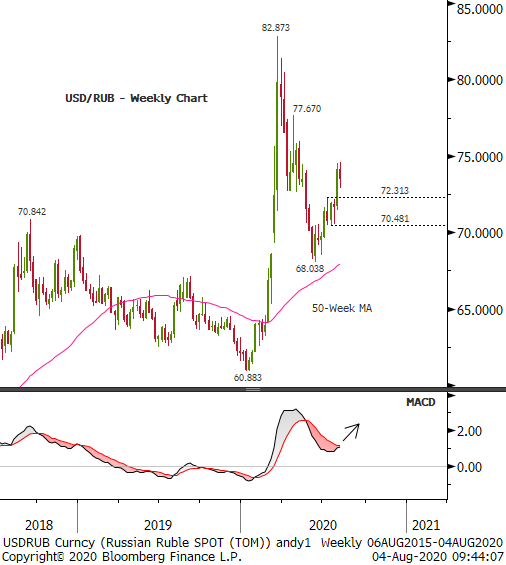