Possibility of First Rate cut in more than a decade – What to expect in terms of Flows? 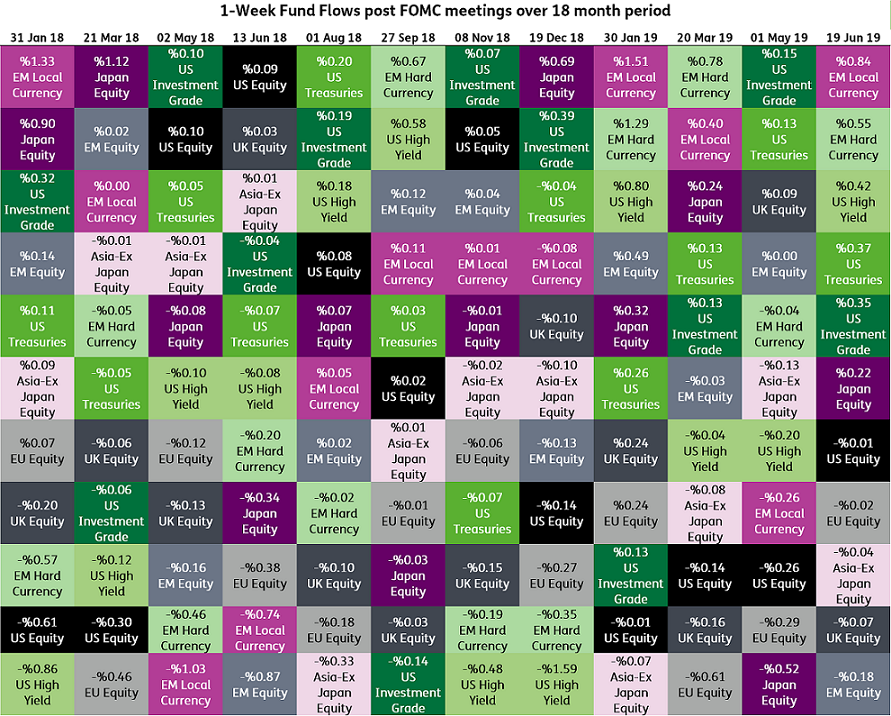 Going into the US Federal Reserve’s next policy meeting at the end of July, Fed Chair Jerome Powell has made it clear that (a) rising trade tensions are sapping both the US and global economies and (b) Fed policymakers are willing to cut short term interest rates to sustain the current, decade-long recovery. As a result, markets are expecting the FOMC will deliver its first rate cut since 2008.

If the Fed delivers the 0.25% rate cut that markets are expecting, what does that mean for global markets and investor appetite? What will fund flows look like?

In an earlier Quant’s Corner post we analysed flows to different asset classes in the weeks prior to the FOMC policy meetings. In this blog post, we will review positioning pre-FOMC and post-FOMC meetings in an effort to identify patterns and trends that may be applicable to the current situation.

The table clearly shows that Emerging Market Hard and Local Currency Bond Funds have received significant inflows in the weeks after this year’s FOMC meetings. But EPFR’s flow data also shows a surprising lack of interest in equity funds year-to-date. Despite evidence in the fixed income fund universe of significant – and growing – yield hunger, none of the major equity regions have seen significant inflows following the last 3 FOMC meetings.

Indeed, FOMC announcements have arguably played a bigger role in determining the overall flow patterns this year -- as Figure 2.0 shows – than the policy decisions. Tracking the fund flows in the first couple of weeks after FOMC announcements generally provided a good direction and signalled changes in trends.

Before looking ahead, it is worth looking back at what happened to fund flows the last time the Fed started cutting interest rates back in September 2007. Then, the Fed cut interest rates by 50 basis points to mitigate the effects of the sub-prime mortgage crisis on the US economy.

Figure 3.0, which is based on EPFR flow data, shows that the positioning during the weeks leading up to the FOMC’s meeting in late 3Q07 was cautious. Asia-Ex Japan Equity and US High Yield Bond Funds posted modest inflows ahead of the first rate cut in that easing cycle while European and Japanese Equity Funds saw outflows. There was little visible interest either way towards the other asset classes. However, the rate cut itself ‘moved the needle’ for multiple asset classes.

In the first couple of days after the FOMC’s September 2007 meeting, US, Asia-ex Japan, and Emerging Market equities started to see significant inflows. The enthusiasm for Emerging Market and Asia-ex Japan equities continued into October 2007 and flows to EM Local Currency Bond funds had picked up as expectations of a dovish Fed elevated the attractiveness of EM currencies. But investor appetite for exposure to US Equities had faded by this point. 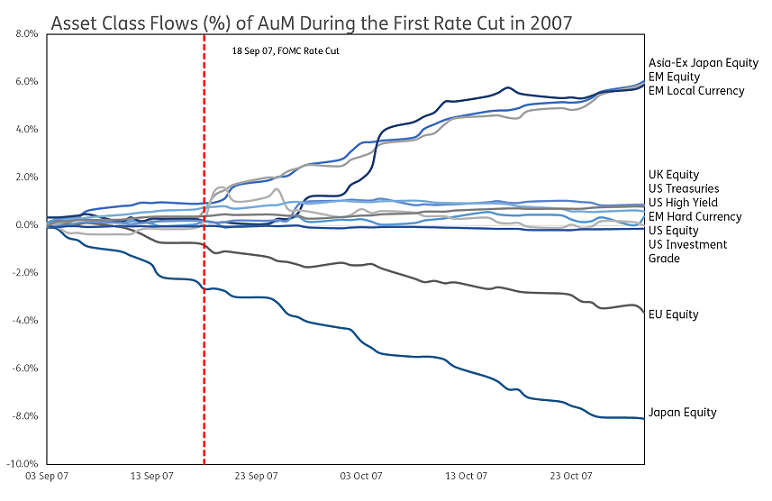 Now, nearly 12 years later and the Fed poised to start another rate cutting cycle, is history repeating itself?

In the run up to this (anticipated) rate cut EM Bond Funds again have momentum. But it is the ones with hard rather than local currency mandates that are shining brightest. Asia ex-Japan Equity Funds are struggling thanks to current US protectionism while funds dedicated to Developed European equity are again experiencing consistent outflows.

Perhaps the major difference between 2007 and 2019 is that the rates cuts in 2007 were in reaction to an unfolding crisis while the anticipated cut this month is more precautionary. So the patterns we saw in 2007 may not assert themselves until the economic risks the Fed is trying to head off become reality.