PBOC announced on the night of 30 June that it will cut the re-lending and re-discount rates by 25bp, effective from 1 July, aimed at reducing funding costs for smaller firms and rural sectors. This narrow-based monetary easing echoed CBRC chairman Guo Shuqing's and PBOC governor Yi Gang's views in favour of a timely withdrawal of the counter-pandemic stimulus. In fact, our observation is PBOC has been very cautious about pumping liquidity into the system via OMO since May (chart 1). 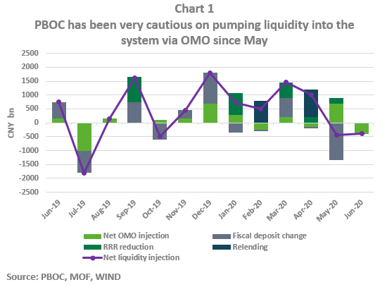 Though we saw some funding pressure during the last 3-4 weeks of H1, the overall liquidity remained ample. Chart 2 shows the average reserves ratio continued to be in downtrend, suggesting we may see a further RRR cut if liquidity turns significantly tighter again. 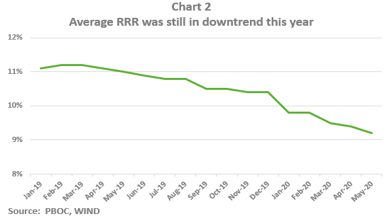 In our view, PBOC in Q3 will continue to keep liquidity just reasonably ample on the one hand, and play down market expectations of more monetary easing. At best, we may see one more RRR cut in Q3. Against this backdrop, there is a good chance the IRS curve will steepen over the rest of this summer. We think the 1-year vs 5-year onshore non-deliverable IRS spread has already bottomed out at 20-25bp area and is gearing up for a return to 40bp level (chart 3).