23 Nov 2020 by Jonathan Cavenagh
Topics: Industry News |
Provided by IGM FX and Rates |
Get a free demo
Login to IGM

Last week we argued that EM Asia FX sentiment/momentum was getting stretched. ADXY moves beyond +4% above its own 200 day moving average have proven to be quite rare occurrences from an historical standpoint. We also argued that equity flow momentum was getting elevated, whilst most currencies were at or had overshot our simple fair value estimate (see this link for more details).

Indeed, USD selling interest emerged into the tail end of last week but that accelerated at the start of this week. Weekend news around the signing of a regional trade agreement was certainly seen as a positive, as was further news around vaccine developments for Covid. On the trade deal, RCEP, which stands for Regional Comprehensive Economic Partnership, will see tariffs progressively lowered across various areas in the coming years. The deal was signed between the 10 ASEAN nations, China, Japan, South Korea, New Zealand and Australia, covering almost a third of the world population and about 29% of global GDP. India pulled out of negotiations last year on concerns that this elimination of tariffs would flood its domestic markets with imports and harm local producers; other countries maintained the door remains open for India.

RCEP is seen to benefit overall growth in Asia while China is likely to play a bigger role in Asian trade especially since the US pulled out of Trans-Pacific Partnership (TPP) deal in 2017. The US not returning to the deal, now known as the Comprehensive and Progressive Agreement for TPP may see the continued decline of the US role in the various Asian economies.
While no doubt this is a positive development for the region's economies, it has been a long time coming. The terms of the agreement were agreed upon last year and was expected to be signed in the summit that concluded last weekend. 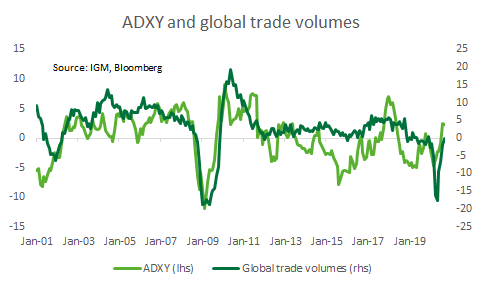 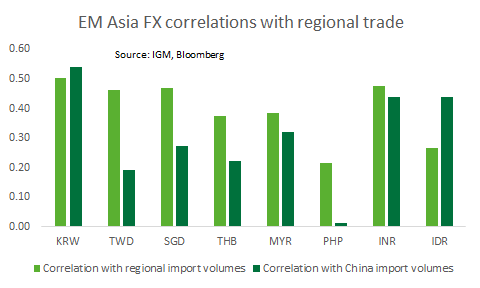 The trade deal is yet to shift growth forecasts for the region in a meaningful way, although it is still early days post the announcement. There is also much uncertainty surrounding the near-term outlook, given fresh Covid waves sweeping the northern hemisphere. In a relative sense, EM Asia still stands out well though. The third chart below is the average consensus growth forecasts for Q4 this year and Q1 next year, for the Asia Pacific and the EU. The sharp downshift in EU growth expectations reflects weaker growth forecasts for Q4 of this year. The divergence with EM Asia is now quite stark.

This divergence is also evident in terms of Google mobility trends, which are holding up reasonably well for EM Asia economies, particularly compared to the northern hemisphere economies, see the fourth chart below. This is in line with broader Covid trends between these regions and economies. More shutdowns or the greater the risk of the virus spreading will clearly act to curtail people's mobility in these economies. In turn, this is spilling over into economic activity, as EM Asia data momentum is generally more positive, as judged by data surprise indices, compared to these other economies/regions, see the fifth chart.

Data momentum has softened in the US and UK but has held up reasonably well in the EU, despite the trend shift lower in the mobility data, see chart number 6. Arguably, the risks rest to the downside in terms of data momentum into year end, although as we noted above there has already been a sharp downward revision to the growth forecast for Q4 of this year. 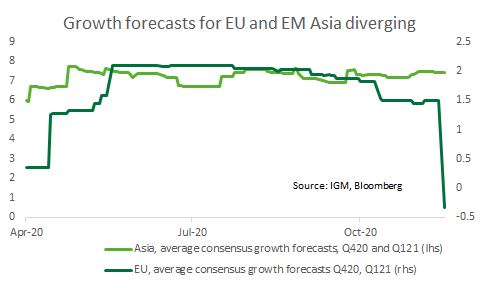 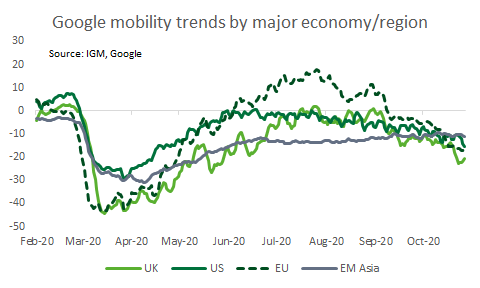 Chart 5: As are data surprises compared to the northern hemisphere 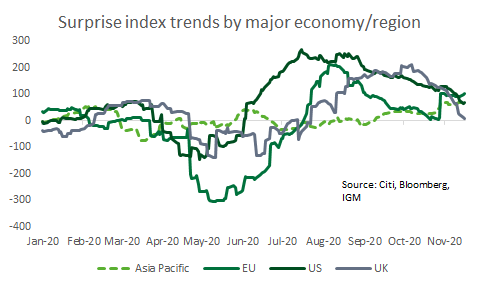 Chart 6: Risks to EU data momentum are to the downside 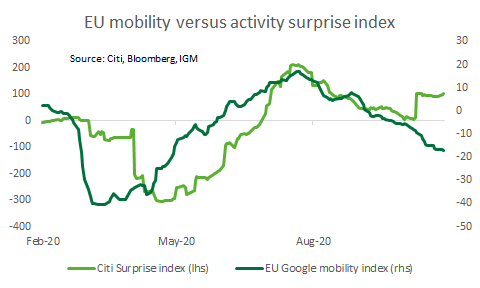 All the above does not rule out further dips in EM Asia FX. There are several potential sources of weakness/volatility. Equity market jitters is a clear risk and as we have noted in the past, EM Asia FX has been trading at a premium to equity market momentum in the region over recent months, see Chart 7 below. The weaker US lead from overnight, due to fresh lock down measures, can spill over into EM Asia equities and FX sentiment. 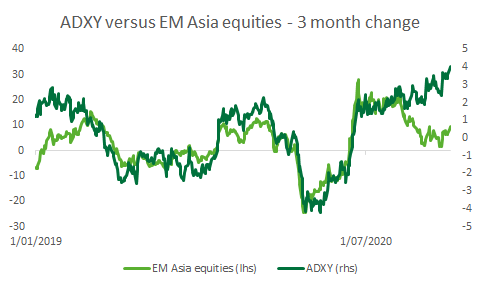 The other factor to be mindful of is China credit market concerns. Our Credit team has noted 'Sentiment in the Chinese offshore bond market is looking as fragile as it has for some time following a handful of recent high-profile onshore defaults by Chinese state-owned enterprises.

The likes of Yongcheng Coal & Electricity, Brilliance Automotive Holdings and Tsinghua Unigroup have sent ripples through the state-backed offshore corporate debt market, as investors get to grips with latest indications that the central government will not provide a buffer of last resort for state-owned companies as had often been assumed in the past.” (see this piece for more details).

Credit spreads look reasonably well behaved so far, with limited fallout to broader market sentiment. Indeed, as Chinese financial institutions look to raise cash, they are offloading local government bonds, which is pushing CGB yields higher. This in turn is widening the interest rate differential further in favour of CNH. Nevertheless, the credit market trends need to be watched closely for signs of spill over into other risk assets.

The final factor we would note is central bank rhetoric. The most recent example of this is the BoT decision this week. The central bank kept rates on hold but expressed concern over baht strength, with fresh measures aimed at curbing THB strength (since) announced (see this link). Elsewhere, we have seen the Korean finance ministry noting recent moves in the FX market are excessive and that action will be taken against artificial moves that increase volatility. This commentary comes as USD/KRW has traded close to 1100 this week. Finally, spot USD/TWD has failed to break below 28.50 for several weeks now. A chart inspection suggests this is somewhat of a short-term line in the sand for the Taiwan currency.

These outlined potential headwinds are unlikely to change the medium-term fundamental direction for EM Asia FX, which remains a positive one. Since the trough point in March, ADXY corrections have been roughly in the 0.5-1.0% range, see the chart below. We would expect similar magnitudes to hold in the period ahead, as the market uses any corrections to set up for what should still be a positive 2021 from an Asian FX standpoint.

Chart 8: ADXY pullbacks have been modest since March of this year

Our short-term fair value models suggest the better value rests with the higher yielding currencies like INR, IDR and PHP and also TWD, although as we noted above, USD/TWD is struggling to break down through 28.50. CNH and KRW sit close to fair value but we expect both currencies to be supported on dips. USD/CNH back towards 6.60/62 and 1 month USD/KRW back towards 1120/25. THB, MYR and SGD are more on the expensive side, see the final chart below. 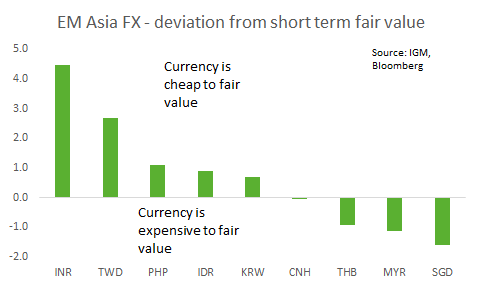