01 Oct 2020 by Jonathan Cavenagh
Topics: Industry News |
Provided by IGM FX and Rates |
Get a free demo
Login to IGM


Last week's announcement that China sovereign bonds have won inclusion into the FTSE Russell benchmark index provides a further boost to China's portfolio inflow outlook. Indeed, the broader backdrop for China capital flows looks to be quite supportive given such exogenous inflows and a supportive yield and growth differential with the rest of the world. At face value this presents a bullish outlook for the Chinese currency. However, our study shows that the correlation between CNY and capital inflow momentum has been declining. This in turn suggests caution in assuming strong capital inflows will equate to currency strength. These shifting correlations are likely to reflect the influence of tariff rates on the CNY and the desire of the Chinese authorities to see some balance in aggregate capital flows (i.e. domestic outflows to offset offshore inflows). This latter point may reflect some caution around the pace of CNY appreciation. There is likely to be added focus on this latter point at the moment given the degree of CNH outperformance in recent months.

Strategy: All in all this suggests waiting for better entry levels to enter fresh shorts in USD/CNH, with potential to re-assess on a move into the 6.85-6.90 region. See the full note below for details.

Whilst the inclusion does not start until October next year, a simple chart of inflows into China bond funds indicates a sharp spike in interest in the past few months (see the first chart). This inclusion could bring in $140bn in passive inflows over the medium term (see this link from our China analysts Tim Cheung and Riki Zhang for more details). 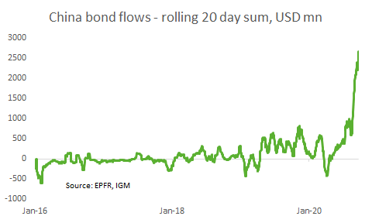 The gradual opening of China's capital markets to offshore investors over the past decade has seen a steady increase in portfolio inflows, with a noticeable pick up in the last 5 years or so (see the second chart below). While still dwarfed by foreign direct investment flows, in recent years portfolio flows have overtaken the 'other' segment of capital inflows in terms of significance. The 'other' segment is made up of, among other things - loans, trade credits and currency deposits.

Chart 2: Cumulative capital inflows into China by segment over the past decade 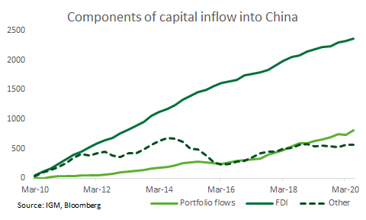 ... with a strong outlook

The outlook for capital flows into China is reasonably positive, at least at the aggregate level. Insofar as capital flows are driven by relative rates of return, the yield differential is trending in favor of China relative to the US, which historically has been a good gauge for capital flow momentum (see the third chart). Low levels of ownership from offshore investors, particularly in terms of local bonds, will shift overtime, which will be an additional source of capital inflow support. At face value, this presents a bullish outlook for the CNY. 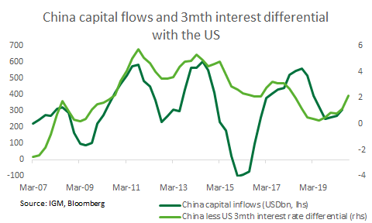 But capital flows correlation with CNY has fallen 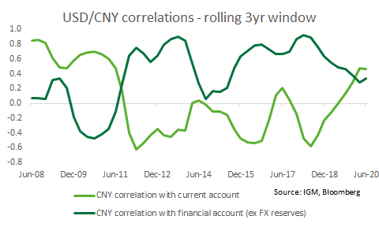 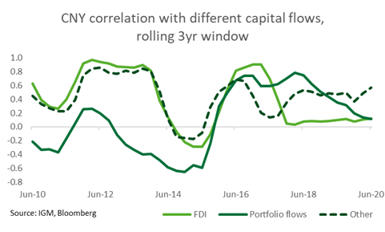 Tariffs and domestic outflows have been an offset

In terms of the drivers of these correlation shifts it's likely to reflect several factors. Firstly, the peak in correlations in 2018 for portfolio flows came at the time the US started to impose tariffs on China. To the extent that CNY sentiment became more driven by tariff announcements during this period, it is arguably not surprising the correlation with portfolio flows declined during this period. The general relationship during this period has been higher tariff rates translates into higher USD/CNY levels, all else equal. Thereby, offsetting generally positive portfolio inflows and reducing the correlation with CNY. Tariffs could come back onto the agenda depending on the outcome of the US election.

A Biden presidency may see increased speculation of the potential to lower tariff rates, although there remains much uncertainty about this. A return of the Trump presidency is likely to see the status quo maintained from a tariff standpoint.

The second factor is that some of the portfolio inflows into China could be FX hedged, particularly in terms of bonds. This would dilute the impact of such inflows on the CNY FX, as the capital inflow into the local bond is offset by a hedging transaction, which shows up elsewhere in the balance of payments.

It's also important to recognize the continued importance of the 'other' flows' category in driving CNY outcomes. As outlined above, such flows are typically made up of corporate activity in terms of loans and trade credits. If a China corporate borrows from offshore and brings the money back into China, this is where such a flow will appear in the balance of payments. Such flows were very important in driving CNY during the first round of QE following the 2008-09 global recession by the major central banks, where capital inflows boosted the CNY. This was followed by a period of capital outflows as Chinese corporates looked to deleverage and pay back some of these borrowings, which naturally weakened the CNY. Such activities can continue to exert an influence on CNY.

The final point would be around the extent to which the China authorities permit greater domestic capital outflows, which would naturally offset capital inflows from offshore. Indeed quotas on such outbound flows have just been raised (see this link for more details). This is likely one reason why we have seen less upward pressure on China's FX reserves than what might be otherwise expected.

The authorities may have renewed focus in the near term on ensuring Chinese currency strength does not become too one-sided. As we have highlighted recently, the CNH has had a great run in recent months but doesn't typically sustain gains beyond 4% over such a period (see the sixth chart below). A similar conclusion is reached when looking at the CFETS CNY TWI index, see chart 7. In recent years the TWI has topped out in the 94-96 region. Note we currently sit around the 94.50 level.

Strategy: All in all this suggests waiting for better entry levels to enter fresh shorts in USD/CNH, with potential to re-assess on a move into the 6.85-6.90 region.

Chart 6: CNH has been a strong outperformer in recent months 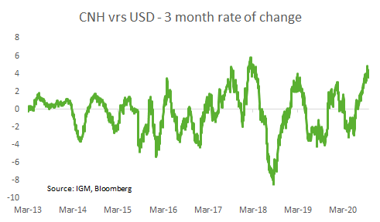 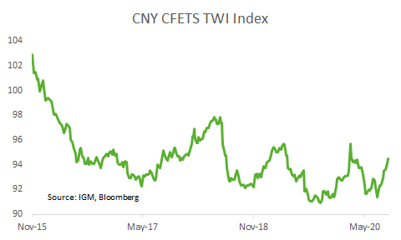