26 May 2021 by Jonathan Cavenagh and Bruce Clark, Natalie Rivett, and Clarence Poh
Topics: Industry News |
Provided by IGM FX and Rates |
Get a free demo
Login to IGM
Share

USD momentum remains weak against the developed market currencies. According to our sample of moving average metrics of G10 currencies, the USD is above only 11% of moving averages (for the 20, 50, 100, and 200-day MAs). This is consistent with the fairly weak DXY trend at the moment, which has seen the broad USD index break down through the 90.00 level.

While such a low score can signal too much bearishness is in place for the USD, it's difficult to see where a turnaround emerges from in the near term. For now, a dovish Fed continues to dominate short term sentiment. At the same time, taper talk from last week has quickly faded, although it could still come back later in the year. Moves by China to calm commodity markets haven't proved to be decisively negative either for the commodity bloc.

Looking at the results per currency, there has been some shift in relative momentum within the G10 space. AUD and NOK have lost some momentum, while EUR has clearly gained some. This may speak to some of the issues around frothiness in commodity markets.

When we expand this analysis to include EM currencies, the USD is above just under 27% of all MAs in our sample. EMEA EM remains the preferred play, while Asia and LATAM lag somewhat. A break of 6.4000 in USD/CNY could aid Asia's fortunes though. 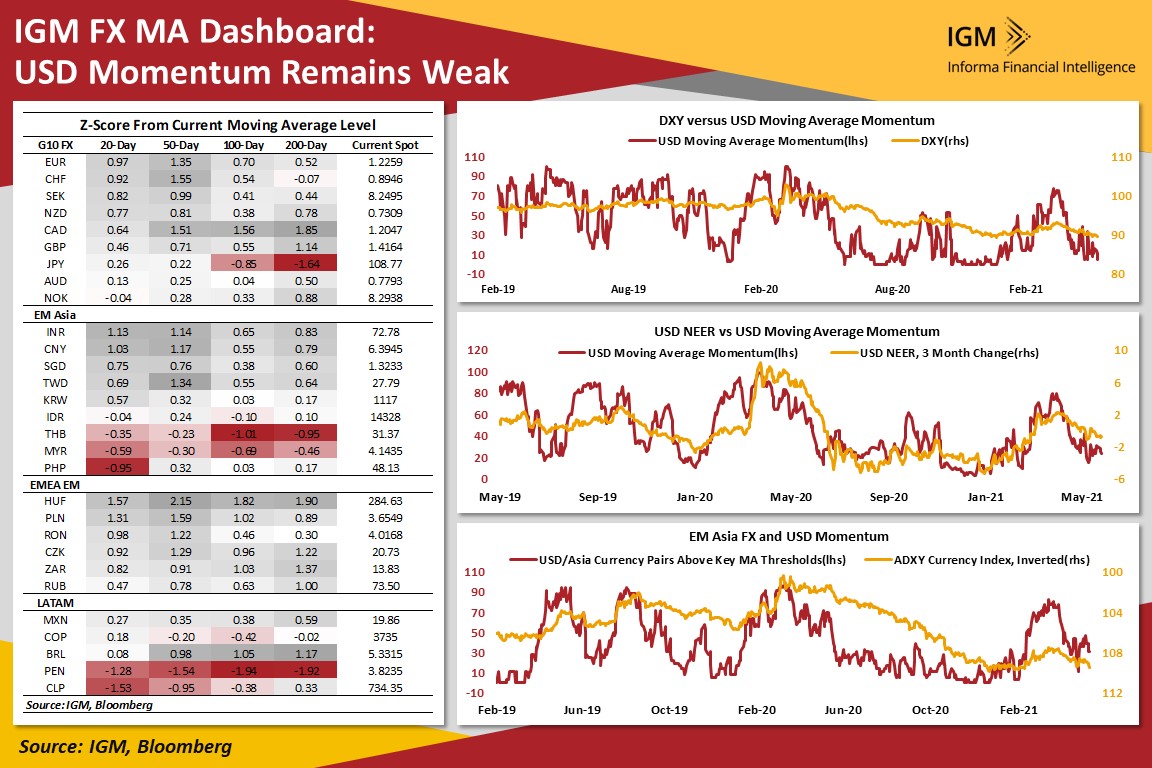 Politics intrudes on the Biden agenda

Bond yields are near recent lows as it becomes obvious that despite a supermajority in Congress, President Biden's Memorial Day (Monday, May 31) deadline for his tax-and-spend 'infrastructure' bill will not be met. Not even close.

As it turns out, there's very little appetite among the political class for raising taxes. Who knew? And with lots of people still unemployed and the cost of living shooting higher, many of the green and social justice initiatives in the current proposal aren't so popular either.

This is the normal back-and-forth of Washington. But it does appear that assumptions since last November's election of massive fiscal spending advanced on straight party-line votes, might have been overly optimistic.

One issue on the horizon that threatens to overtake the entire debate is growing evidence that the coronavirus originated in ways other than originally claimed. Sunday's WSJ exclusive is on everyone's lips in DC. See: https://on.wsj.com/3bPWWCd

And last week, the Biden administration's COVID point man Dr. Anthony Fauci dropped a bomb (and reversed his previous position) by calling for an investigation and saying that he was 'not convinced' that the virus developed naturally outside the lab. Because it came from Fauci, it means the issue has gone mainstream and guarantees it will not go away, potentially throwing politics into complete disarray as answers and accountability is demanded.

Legislative gridlock in Washington would undercut the case for an overheated economy and may be an emerging theme developing in the bond market. 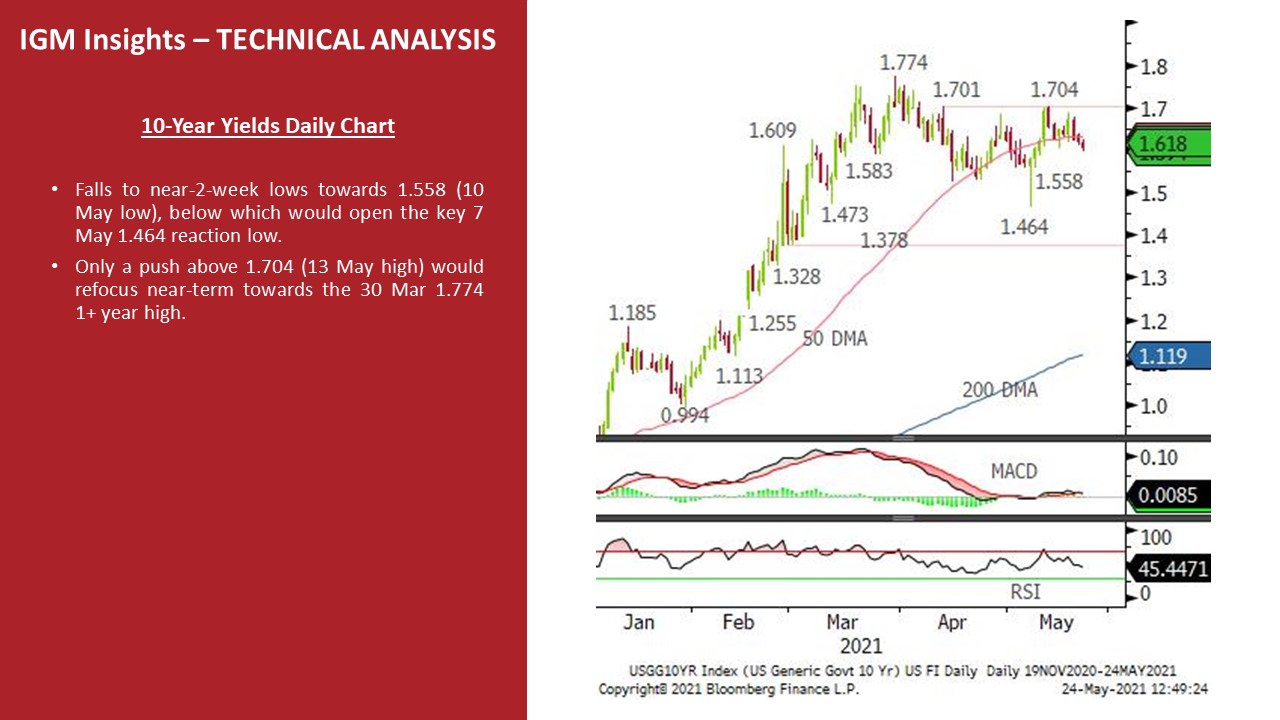 The minutes from the FOMC meeting have raised the prospect of tapering the Fed's bond buying program. While this may not be a core view at the Fed, the debate is unlikely to go away given inflation concerns and large fiscal stimulus. This suggests the need for both monetary and fiscal stimulus to be running at full speed will continue to be debated.

The 2013 taper experience was bad for EM assets, with FX and equities underperforming. Any tapering could be different this time around, as the Fed may try to keep hike expectations and tapering as two separate and distinct outcomes. Still, given the run up in EM assets in the past 12 months and the only modest adjustment higher in US real yields to date, it's difficult to make the case that the EM bloc would not be impacted by any formal tapering talk.

For EM Asia FX, we find the region better prepared now compared to 2013, albeit with likely divergences in outcomes. The current account surplus currencies, and high FX reserve holders- TWD, SGD and KRW would still be expected to outperform on a relative value basis. CNH is in a similar bucket. For the rest, IDR, and MYR we would be more cautious on in terms of performance. Foreign debt holdings would be a risk in terms of outflows, while domestic outflows could also pick up, particularly if the local central banks don't turn more hawkish. For INR, THB and PHP, they appear better placed compared to IDR and MYR. 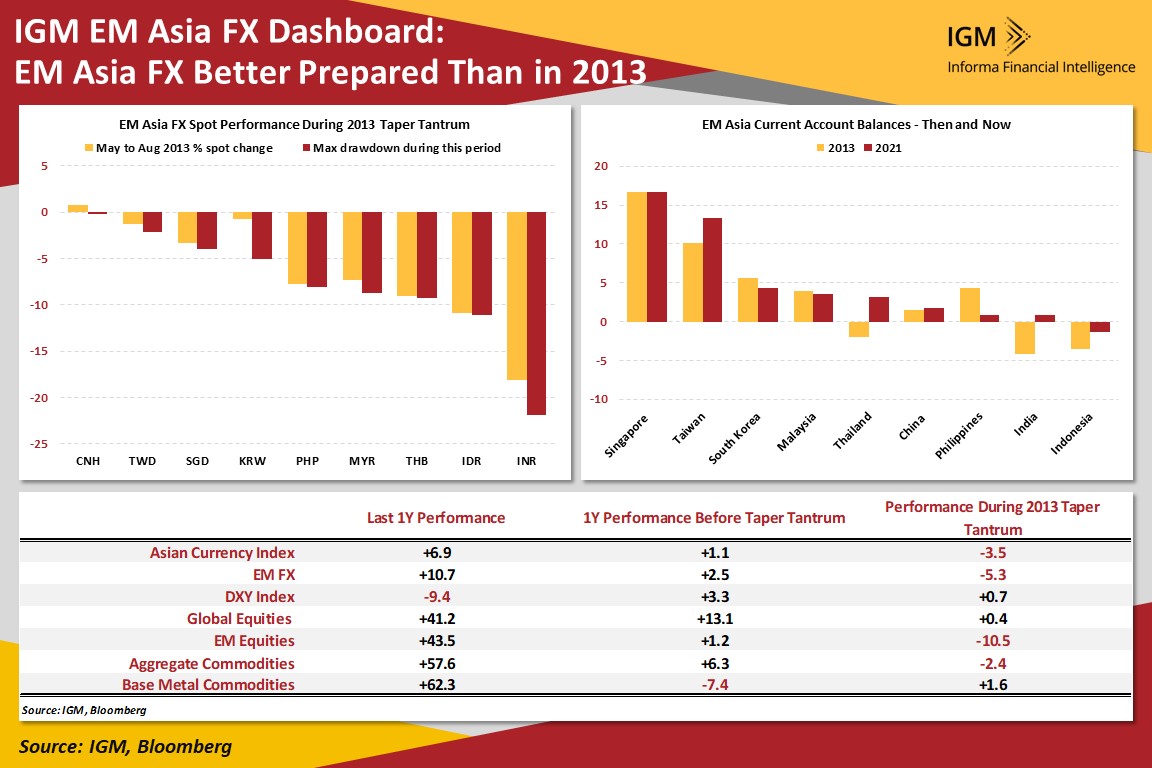 Weighing up the South African Rand's prospects into year-end

No other major Emerging Market currency has performed so well as the South African Rand, with USD/ZAR currently trading at near two year lows and net bullish ZAR positioning at the highest level since early March. A key contributor to the Rand's outperformance to date has been the wide-ranging commodities rally, thanks in part to South Africa's exports of metals like platinum and iron ore, the latter of which has seen prices propelled to record highs this year. This in turn has led to the country's improved terms of trade, bolstering the current account balance.

Another important driving force behind the Rand are the large dollar inflows from loans South Africa received from the IMF and New Development Bank at the height of the pandemic, which created a surplus of USDs in the local banking system. That has pushed up USD/ZAR basis swaps above the long term average, making it expensive to short the c¬urrency.

Whether the Rand can maintain its strength in H2 will depend much on the performance of the commodities complex and whether in fact a commodities super-cycle has arrived. For commodity bulls like Goldman Sachs, the answer would be yes, but for many economists the strong performance from the Covid lows of 2020 is just a cyclical upswing that lacks the structural demand story that drove previous super-cycles.

Meanwhile the inflation narrative brings with it the potential for increased rate hike expectations from the Fed and potentially higher UST yields and a US dollar ahead, which would make the Rand and SAGBs less attractive.

That said, as already suggested, the cost of betting against the Rand will likely remain elevated for some time, which will continue to work in the Rand's favour into H2, as will the improved terms of trade from higher commodity prices this year. However, in the event of a negative turn in the global economic backdrop, with rising UST yields and a firmer dollar, South Africa's structural constraints, a weak pace of economic reforms and slow vaccination rates, which are constraining South African GDP growth, could see the Rand come unstuck. 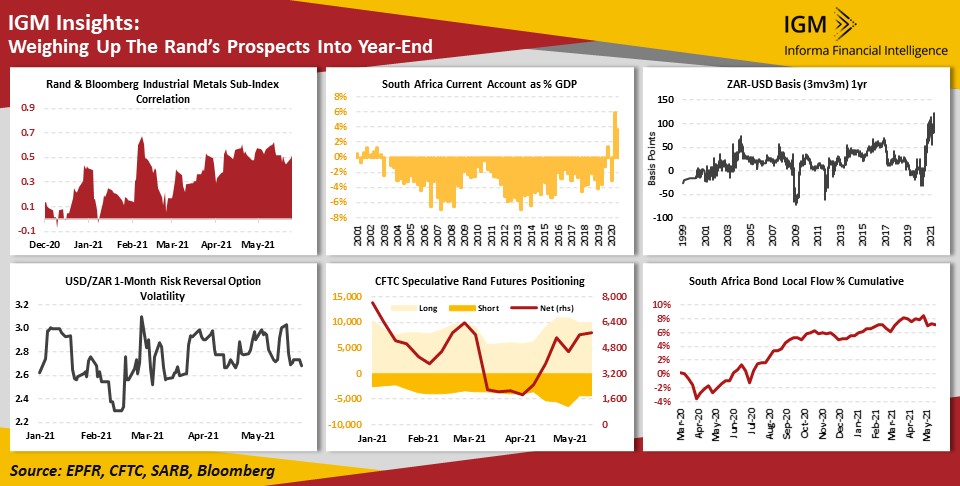 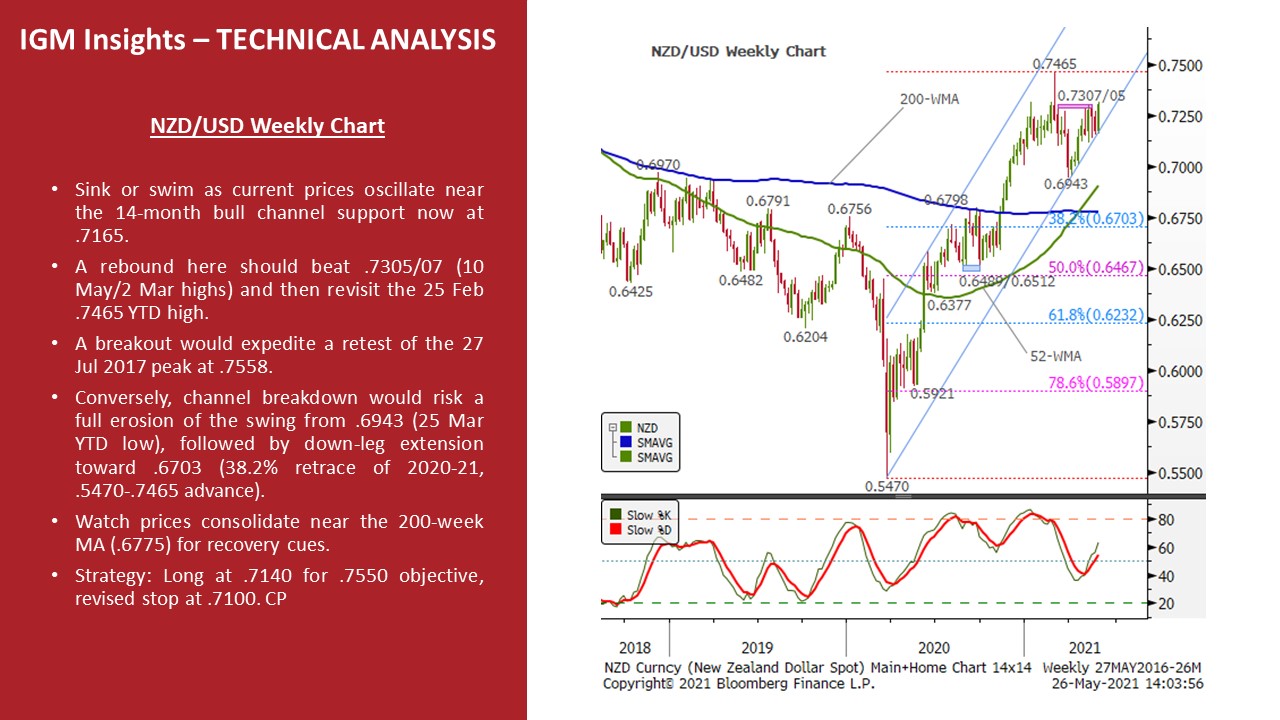