USD gains have accelerated in recent weeks - to the extent that the DXY and USD NEER are close to 3% higher since the start of the year. The combination of surging US yields, higher US growth expectations, on the back of fresh fiscal stimulus, and skewed short USD positioning have all been important drivers of these moves.

The medium-term bias is likely to remain one of reflationary trade themes in FX markets, where higher beta/commodity currencies continue to outperform low yielders/safe havens, as the global economy continues to recover, and the vaccine rollout gathers pace.

However, it may be too soon to fade this shift higher in the USD, even for higher beta plays, as the stronger USD in turn takes some of the froth out of the base metal market and some concern around the degree of policy support from China dents commodity sentiment to some degree. Supports for the USD in terms of higher yields and better growth optimism may remain in place in the near term. The Fed also appears reluctant to embark on any fresh stimulus given still supportive financial conditions overall, whilst it's difficult to argue the market is aggressively long USDs.

In EM FX, higher US yields have dented sentiment as well and whilst this is arguably starting to create value in some markets, much like the majors, it may be too early to fade USD strength. A further layer of uncertainty for EM are signs of less supportive stimulus and growth momentum from China in recent weeks. To this end we should expect to see those economies with larger current account deficits generally underperforming amidst rising US yield pressure. 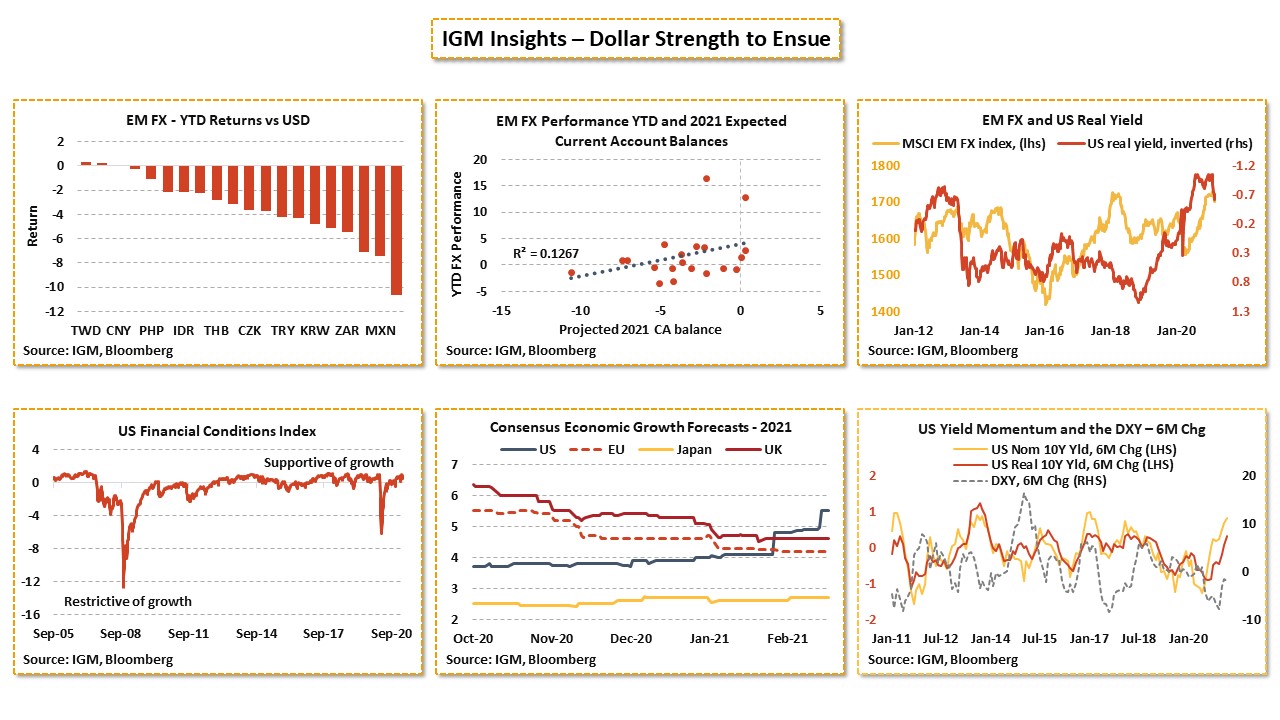 Chinese Premier Li delivered his government work report (GWR), outlining key economic policies and targets for the year and development priorities during the 14th Five-Year Plan (FYP) for 2021-2, including a conservative growth target of "above 6% y/y" for year 2021, after the omission in 2020.
With regards to monetary policy, the GWR vowed to achieve a balance between supporting growth and preventing risks, and to keep the macro leverage ratio "basically stable". It also stressed that "prudent" monetary policy should be flexible, targeted and reasonable, ensuring reasonable and sufficient liquidity. However, it did not mention a potential use of interest rate cuts and/or RRR reductions to support credit growth like right after the 2020 NPC. An urgent need to stabilize land prices and property prices was also stressed.
Overall, the central government is looking to achieve three things this year:

We expect to see a slightly smaller supply of government bonds in 2021, which should not have significant impact on the demand/supply outlook. 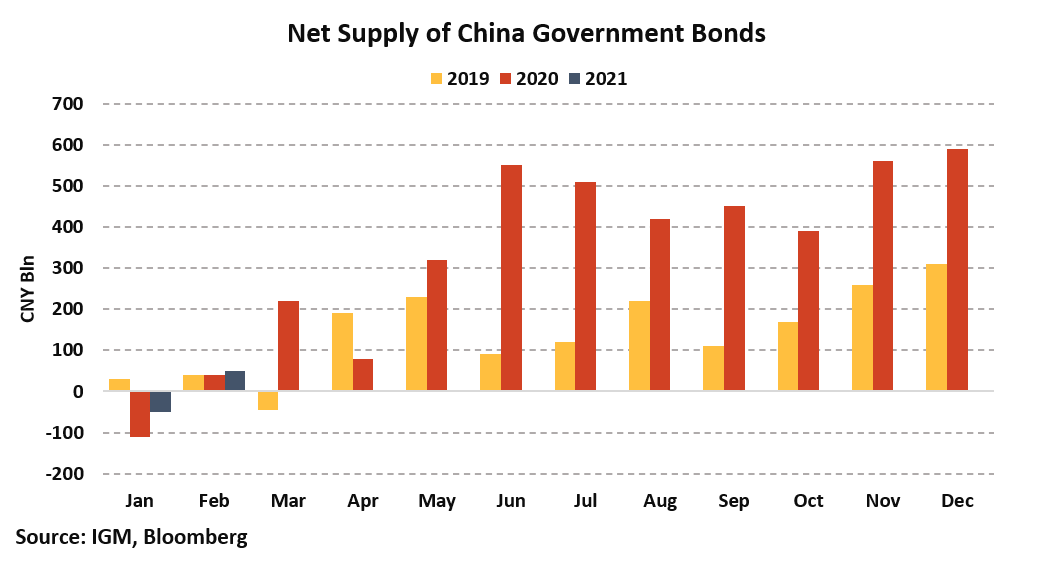 However, as far as monetary policy stance is concerned, the growth stated in the GWR appears to reflect policymakers' bias against major monetary easing in 2021.

In our view, monetary policy tightening is already underway and could tighten faster than expected if economic growth improves faster than expected. The Central government will try its best to avoid interest rate cuts and/or RRR reductions. Instead, it will rely more on OMO and MLF to manage liquidity. That combined with the remarks delivered by Guo Shuqing (the Chairman of CBIRC) at a pre-NPC press conference on 2 March, suggests the yield curve will be likely going steeper over the rest of the year. Guo said in the press conference that the bank lending rate will rise this year. Meanwhile, he also stressed that rising property prices and a resulting property bubble are the Number One risk for China's financial system.

No easy fix for Brazilian Real

With risk sentiment increasingly undermined in recent weeks by rising UST yields, the broad EM FX trend year-to-date has been lower against the dollar. Leading the sell-off is the Brazilian Real, which has shed over 10%. That follows a leading decline of almost 29% for 2020.

The Brazilian currency has underperformed since the very beginning of the year, with the government's poor management of the Covid-19 pandemic, together with a building virus second wave and a reform agenda that had been stopped in its tracks, all weighing on investor sentiment.

The Senate's approval of the Emergency bill last week, which crucially avoided the worst-case fiscal scenario, provided no lasting reason for joy. Brazil's government debt, which reached a record 89.7%/GDP in January, will ultimately continue to climb. All the while inflationary risks are building. That should ensure the BCB has no choice but to undertake faster rate normalisation than it would probably like given the economic outlook. That would undermine consumer confidence and the economic recovery.

Then there is the issue of former president Lula, who has this week had his convictions in the Carwash corruption probe annulled by the Supreme Court, leaving him free to challenge Bolsonaro in next year's presidential elections, potentially. That would certainly risk derailing the already slow progressing reform agenda and bring forward an election debate that wasn't set until closer to the vote in October 2022. It is a situation to be monitored.

It looks as though the Real's list of troubles has possibly just got longer and ultimately, there will be no easy means of restoring long-deteriorating sentiment towards the Real or wider Brazilian assets.

Risks remain to the upside for USD/BRL, with our technical outlook suggesting scope for an extension to the 5.8885/5.9700 zone and any near-term corrective dips seen holding over the 5.5156-5.5469 zone. 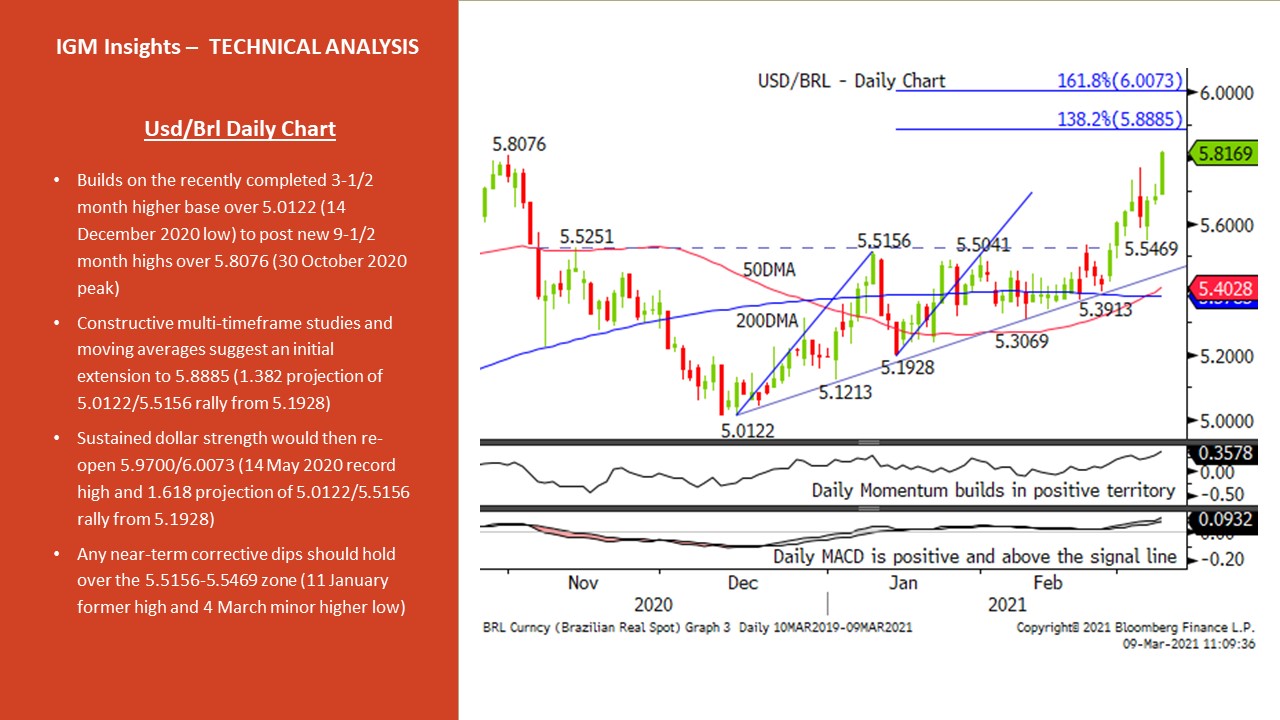