Commodity bloc still likely to be favored over low yielders

The USD has seen a meaningful correction from late March highs, with the DXY down around 2.5% since a late March peak. In NEER terms we are off by a touch over 2%. There is scope for this trend to continue given the EU's vaccine catch up, dovish Fed backdrop and unattractive USD FX valuations - with the twin deficits still a large longer-term headwind.

The counterpoints are that the market can still challenge the dovish Fed outlook. Already strong underlying momentum in the economy, coupled with prospects of additional fiscal stimulus, and strong headline inflation pressures, all point to risks around the Fed view being challenged. US growth upgrades are also still outpacing those seen in other major developed economies. We have highlighted in the past how relative growth momentum can be a key driver of relative FX performance, via the capital flow channel. At the moment, that momentum still appears to favour the USD, although this dynamic can obviously change as we progress further into Q2. 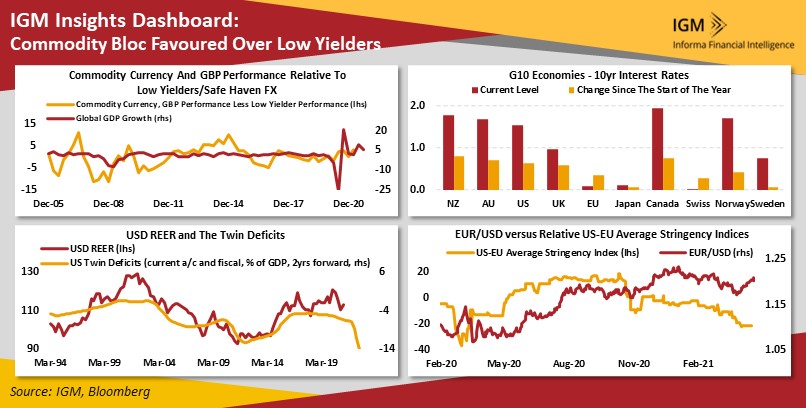 Mexican Peso set to reap rewards of US recovery

Expectations of firmer US growth should have positive spill-over effects for Emerging Markets via increased global trade, especially as the Fed has yet to buckle and change its messaging on tapering and rate rises. On what specific EM currencies stand to benefit from US growth via trade links or exports, the US Census Bureau statistics on trade from February 2021 showed Mexico importing the most into the US, alongside with China and Canada. The Mexican Peso, in fact, has been one if not one of the strongest performers against the USD from 1 April and year-to-date. Looking ahead, we would expect the currency to remain supported based on the below factors:

US Economic Recovery - Mexico stands to benefit from the US economic recovery due to positive spillovers from the infrastructure plan raising demand for Mexican exports. There should also be an increase in remittances from immigrant workers sending money back into Mexico. However, as the below chart shows, the relationship between increases in remittances and MXN strength is not that strong.

Positive real rate - With the better economic data of late has come waning expectations for Banxico policy accommodation. This has helped stabilise the Mexican 10-year yield, which adjusted for inflation remains above the 2.00% handle. This is an attractive real yield that should continue to attract inflows to Mexican assets. The real Banxico policy rate continues to slide as inflation surges, turning negative for the first time in March, reflecting just how accommodative the Banxico's stance is. However, this does not seem to have been a support for USD/MXN, which has dropped below the 20 handle since the end of March.

Correlation with US real 10-year yield - The MXN's correlation with rising US real yields has been largely positive over the last year, which suggests the MXN will benefit from rising yields on a strong US economic recovery.

Deviation from 200-day MA - The MXN has strengthened above its 200-day MA, but vs the strength of the move in the BRL, the MXN still has room to manoeuvre.

CFTC/EPFR data - The positioning data from CFTC and fund flows data from EPFR shows that there has been a disconnect between bullish MXN positions and a return of investor inflows to Mexican bond and equity funds, which also suggests there could be room for a catch-up rally in the MXN if CFTC positioning returns to its pre-pandemic levels. 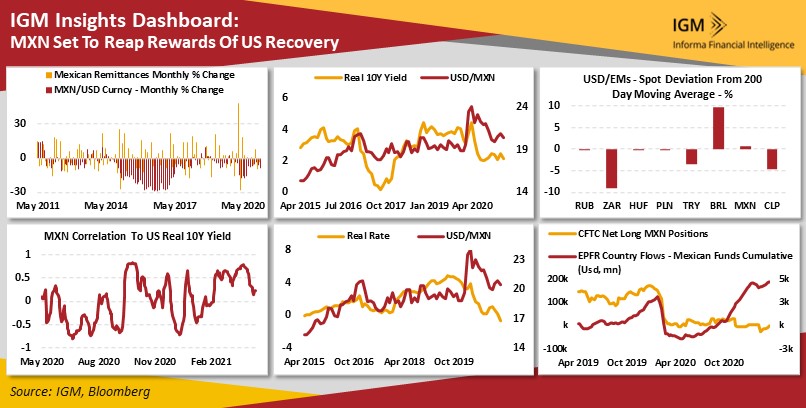 PBOC may turn proactive to inject liquidity in May

Liquidity is becoming slightly tighter ahead of China's May 1st to 5th Labour Day holiday. Despite that, we do not expect a significant deterioration in bond sentiment over the rest of April. We suspect bond supply pressure will gradually increase into May. That, combined with tax payments, will likely make PBOC find it necessary to resume OMO net injections after the Labour Day holidays. As a matter of fact, a re-emergence of net withdrawal of liquidity resulting from the smaller-than-required MLF rollover has not caused a spike of interbank repo rates. That, to a certain extent, suggests the market is still confident that liquidity tightening will not happen anytime soon. As far as the CGB market is concerned, we expect short-dated papers will continue outperforming their long-dated counterparts during most of May on hopes of a resumption of PBOC's OMO net injection. 2-year CGB, currently at 2.68%, will likely hit 2.55-2.50% region over the next 4 weeks. 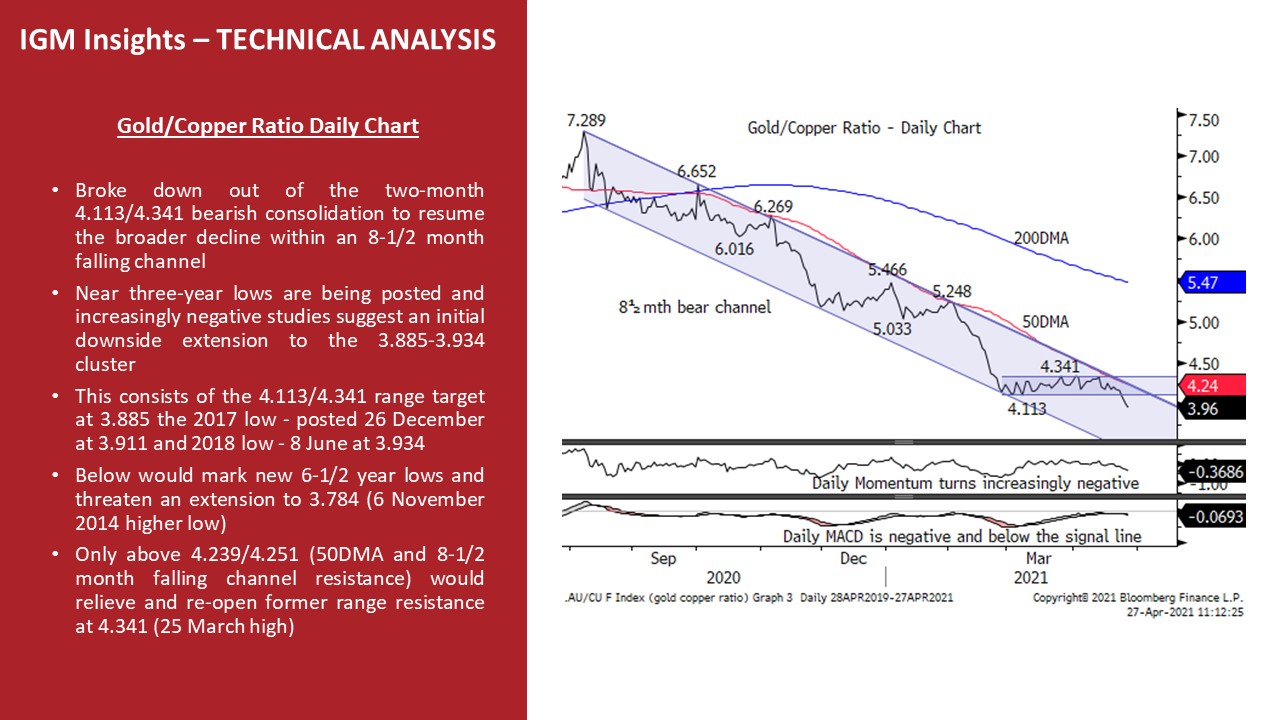