A September to Remember
SEPTEMBER 2021 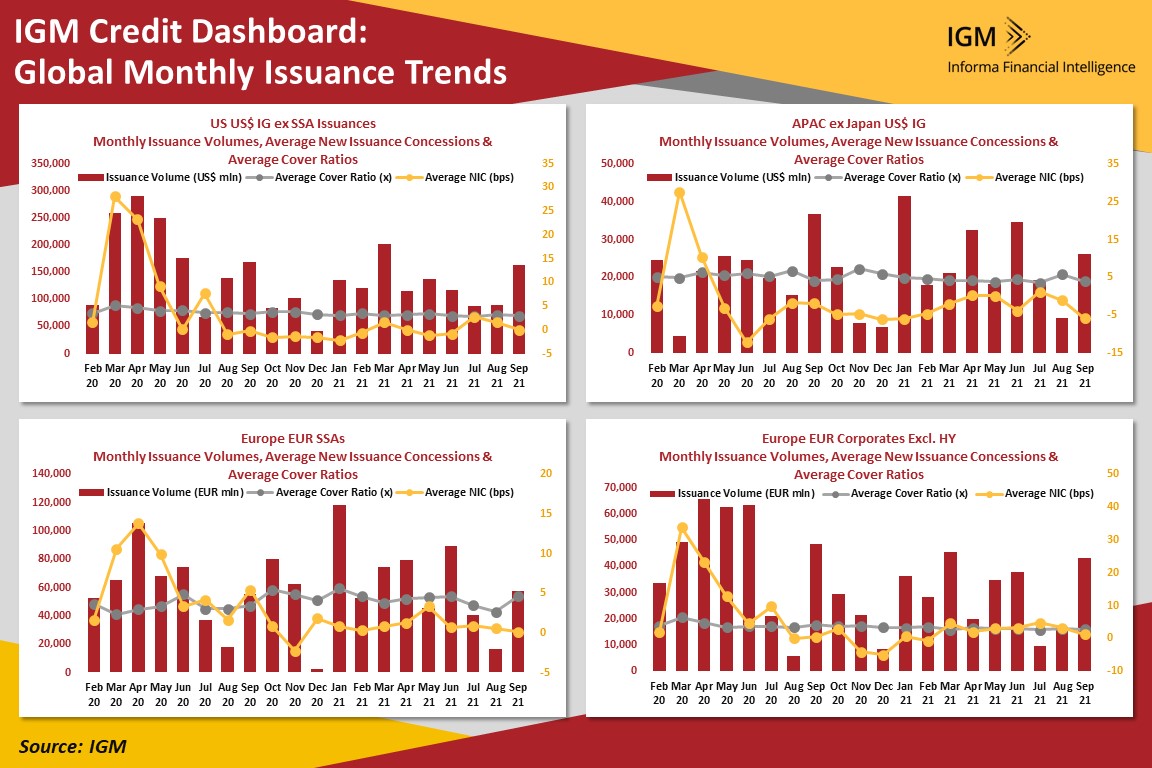 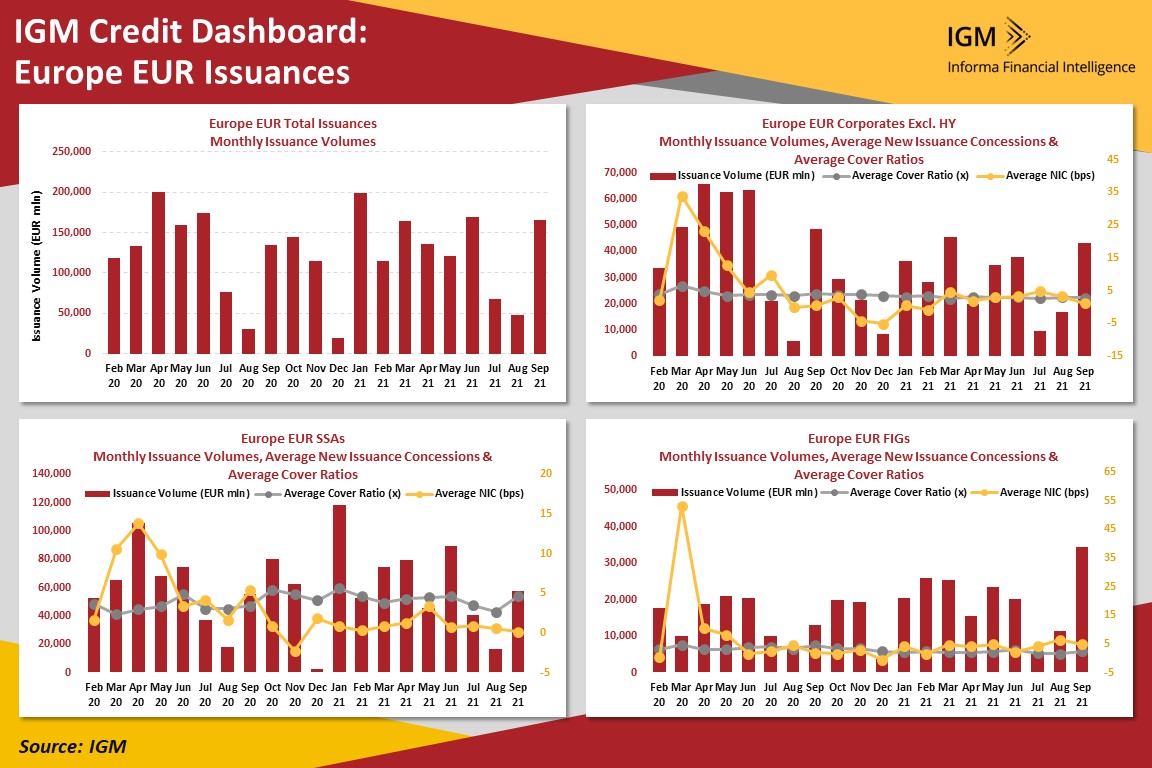 The European primary market picked up pace sharply in September as issuers returned to their desks to find that markets remained receptive. All asset classes contributed to the upswing in supply, led by SSAs in absolute terms and Covered in relative terms where supply from the latter jumped by 15 times the amount seen in August. That came in a month where the holiday season came to an end and underlying yields continued to rise with the 10yr bund yield increasing by 18bps over the month to hit its highest level since June. Higher supply and rising yields came as stocks in Europe succumbed to nascent inflation concerns with the Stoxx600 losing 3.41% on the month, accompanied by some huge sector divergence with Energy and Banks rising while Real Estate and Utilities tumbled.

Corporates (ex HY): September was the second busiest month of 2021 for corporate supply, second only to a blockbuster March. There was plenty of investor cash to support rising supply, allowing issuers to price deals with the lowest average NIC since February. Among the month’s highlights, Enel SpA (EUR3.5bn long 4yr, long 7yr and 13yr) sold the largest ever SLB corporate offering which also marked the fourth biggest single currency corporate bond of the year. A string of US names crossed the Atlantic with General Motors (EUR600m 7yr), Mondelez (debut EUR2bn 8/11/20yr Green three-part), DXC Technology (EUR1.35bn 6/10yr two-part), Public Storage (EUR700m 9yr) and Celanese (EUR500m 7yr) all hitting the market in the opening week of September. By the end of month, there were some signs of higher supply catching up with the corporate market though where order books showed some notable sensitivity in the final week of September.

FIG (ex-covered): The transition to a higher yielding environment proved conducive for sentiment toward banks, in turn allowing FIG issuers to raise the most in any month of 2021. Investor demand more than kept up with rising supply where average cover ratios rose while average NICs fell. The month was frontloaded with the second week of September marking the busiest week of 2021 so far. Among deals to grab the limelight was a record setting AT1 from La Banque Postale which achieved a record low coupon for a euro AT1 with its PNC7.5 pricing at 3%. Annual ESG supply nudged further into record territory with Green remaining the dominant format of choice, representing 60% of September ESG supply and a larger 75% of 2021 EUR supply.

Covered: September registered record supply with the month seeing the highest volume week YTD (wc 10 Sep when EUR6.95bn was priced), helping the month claim the title of busiest of the year so far with EUR22.5bn sold. This was the first time volumes in September exceeded that of January since 2015. And aside from blockbuster volumes, the month also saw the first ever Icelandic euro covered line and the first Spanish CH this year. Canadian issuers were out in full force in September and six banks sold a combined EUR5.6bn. Also noteworthy was the focus on duration with six issuers hitting the ultra-long end of the covered curve.

SSA: September was remarkable for how different the pace of new issuance was at the outset of the month relative to the close. Up to 16th Sep, SSAs printed a total of EUR48.518bn of new EUR paper, compared to just EUR9.235bn for the remainder of the month. Sovereign borrowers were very well represented in the first group, with a whole host of non-core European names (Austria, Serbia, Slovenia, Hungary, Spain and Greece) being joined by EM names in the shape of Chile & Indonesia. Also noteworthy, the average NIC hit it’s lowest level since Nov 2020, with banks able to squeeze in pricing as the average coverage ratio saw a boost to 4.63x, ahead of its 2 year average level of 3.85x.

HY (Corporate): After a slow start to September, HY-rated corporate issuance in the single currency accelerated to push the monthly volume just past the EUR7bn mark. However, with the debt markets pumping out deals at break-neck speeds in 2021 that marks the third slowest month this year, with only February and the holiday month of August posting lower volumes. What did print in September was well received, with all but three deals pricing inside or at the tight end of guidance. Those three deals did still manage to price at the centre of their ranges and, in mitigation, two of those, including Grifols’s EUR1.4bn trade – the largest single EUR HY corporate note since ThyssenKrupp's EUR1.5bn trade in Feb 2019 – came in the final week of the month when the market was decidedly softer. 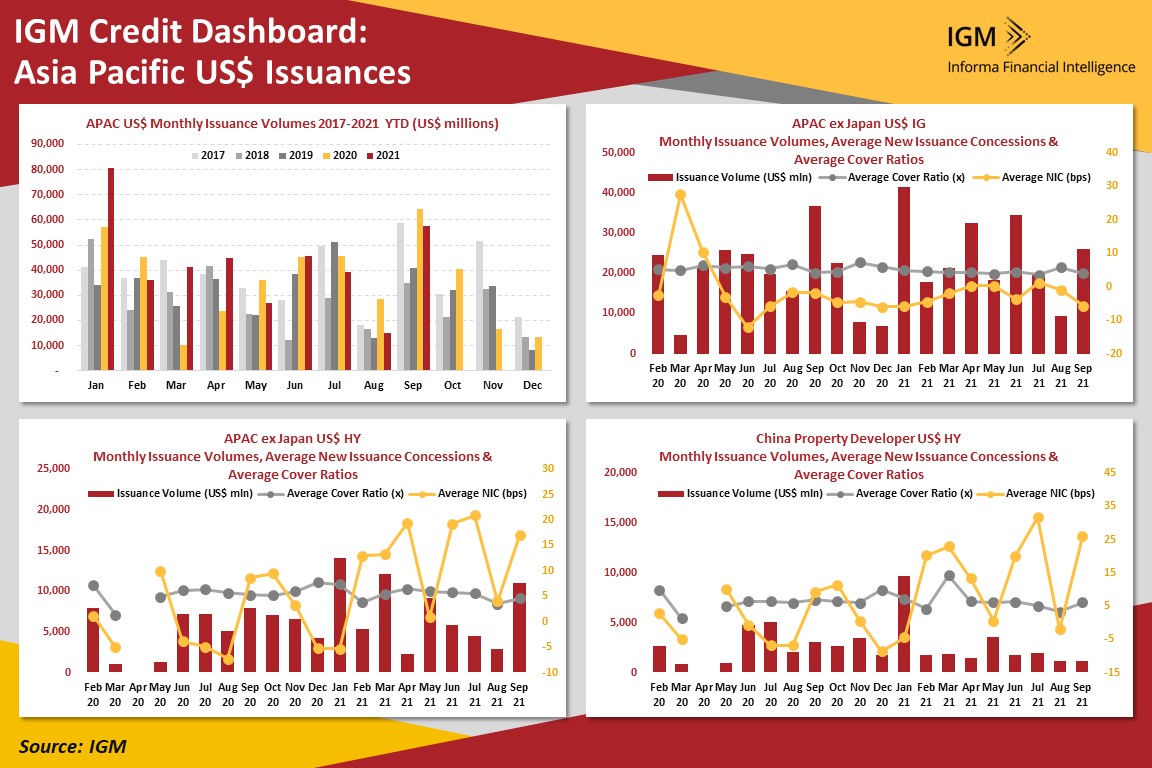 The floodgates opened at the start of the month in the APAC US$ primary bond market with the frenetic pace of issuance continuing unabated until around the third week, as a raft of issuers seized on accommodating market conditions to lock-in funding ahead of an anticipated rise in interest rates down the line.

Those expectations were subsequently reinforced by a hawkish Fed which signalled that it would ease back on its bond buying programme as soon as November, while noting that interest rate hikes are possible as soon as early next year. That, along with heightened inflationary and economic growth concerns, some regional holidays and the spiralling Evergrande debt crises, weighed on risk sentiment and abruptly took the wind out of the primary market's sails.

US$57.668bn of issuance priced in total (including Japan) in September 2021, which smashed the seasonally subdued month of August when just US$15.119bn managed to get over the line. It fell short of the record-breaking September 2020 which produced US$64.339bn of supply however, and actually ranks the third slowest September in terms of issuance volume in the past five years.

Stripping out the significant contribution of Japanese issuers (US$18.325bn) shows the monthly total in September 2021 closed out at US$39.343bn, which was dominated by investment grade issuers who made up US$26.163bn of that.

APAC high yield supply also jumped notably in September to US$11.03bn from just US$2.894bn the previous month of August, with September boasting the fourth highest monthly total since January 2020. That was thanks in no small part to the jumbo US$6.16bn Subordinated AT1 transaction from Industrial and Commercial Bank of China which contributed over half of the monthly high yield total.

High yield issuance was also largely ringfenced to the first two weeks of the month, before amplified fears of a disorderly default of China Evergrande and the potential impact on the real economy and wider financial markets, slammed the door shut on many regional higher yielding names.

That was particularly true of Chinese high yield property developers which once again struggled to find a window of opportunity for prolonged periods in September, as illustrated by the paltry US$1.17bn of issuance that made it over the line in what marked a continuation of a long-standing trend which has been in place since February 2021.

And the small number of high yield developers that did manage to fund offshore had to pay up for the privilege, as reflected by the inflated new issue concession at 26bp on average in September. 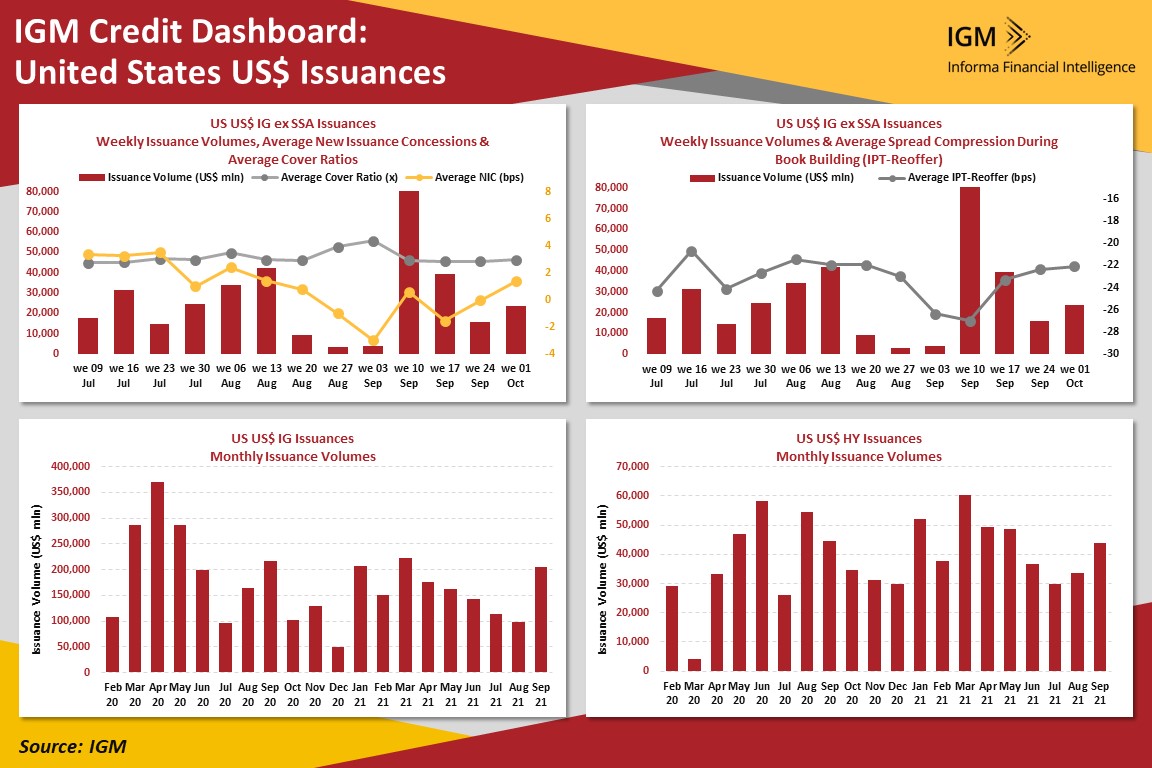 Overall US IG (SSA-inclusive) issuance leapt to US$204.70bn in September from a mere US$98.66bn in August to mark the third highest volume this year after March and January's impressive pace. Whilst September is traditionally busy, the volume exceeded even the most bullish of expectations and broke a drought where issuance volumes had declined for the past five straight months. Notably September's issuance volumes were just over 5% lower than last year's extra-ordinary performance and 2% higher than September 2019's volume.

US SSA issuance bounced back aggressively to represent 20% of total IG issuance at US$42.10bn compared to a mere US$8.855bn in August. Of the 23 SSA issuers that came to the market, largest deal was Republic of Hungary's US$4.25bn RegS/144A 2-part offering of 10 and 30-year notes which attracted combined books of over US$15.5bn pre rec. Australian state-owned broadband provider NBN Co Limited, rated A1/AA by Moody's/Fitch, otherwise sold a US$2bn 3-part 144A/RegS transaction in a follow up to its inaugural foray into the dollar market in April.

Coming into the month, on average, the Street was thinking along the lines of US$136.7bn being priced in the high grade ex-SSA primary market. Some actually thought we could see as much as US$160bn cross the tape. As it turns out, through no fault of their own, it appears the Street underestimated the resolve of corporate borrowers, despite rather adverse conditions, to forge ahead with their debt financing, be they out of necessity or simply opportunistic, with ex-SSA issuance topping even the highest guess.

And all of this was accomplished in what can only be described as extenuating circumstances. Volatility in, not only, the equity markets, which is a normal occurrence, but the Treasury market as well, made for some choppy waters for corporate issuers to navigate. Over the course of the month, the three major indices waffled throughout.

The ex-SSA deals priced this month also did so with attractive funding costs, with an average contraction from IPT/PX of 24.79bp; an oversubscription rate of 2.9x; and an average NIC of 0.04bp. Conditions are in fact looking increasingly conducive, with the latter marking a third straight month of improvement after the average new issue concession turned positive in July for the 1st time since March and hit the largest since a year ago (i.e. July 2020).

Looking ahead, ex-SSAers are looking for, on average, US$92bn to price in October, just barely topping last October's US$82.995bn. The estimates ranged from a low of US$70bn, which would make it the slowest ex-SSA issuance October in 10-years, to a high of US$110bn.