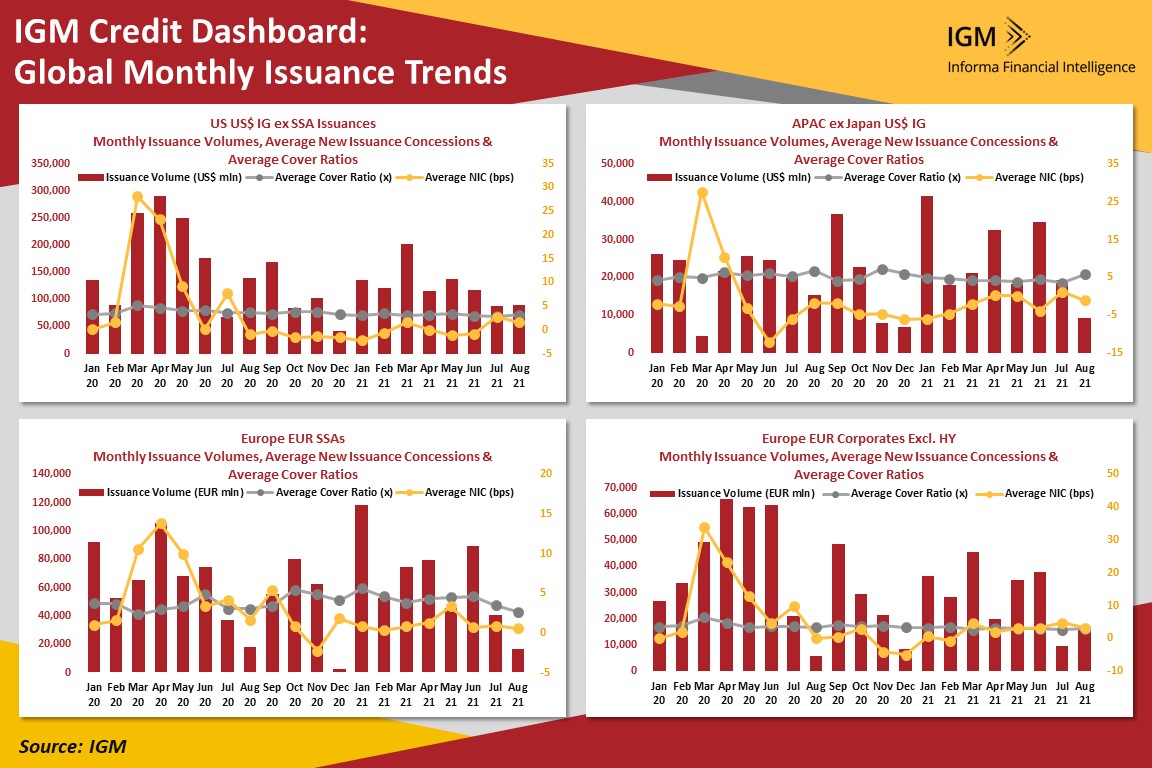 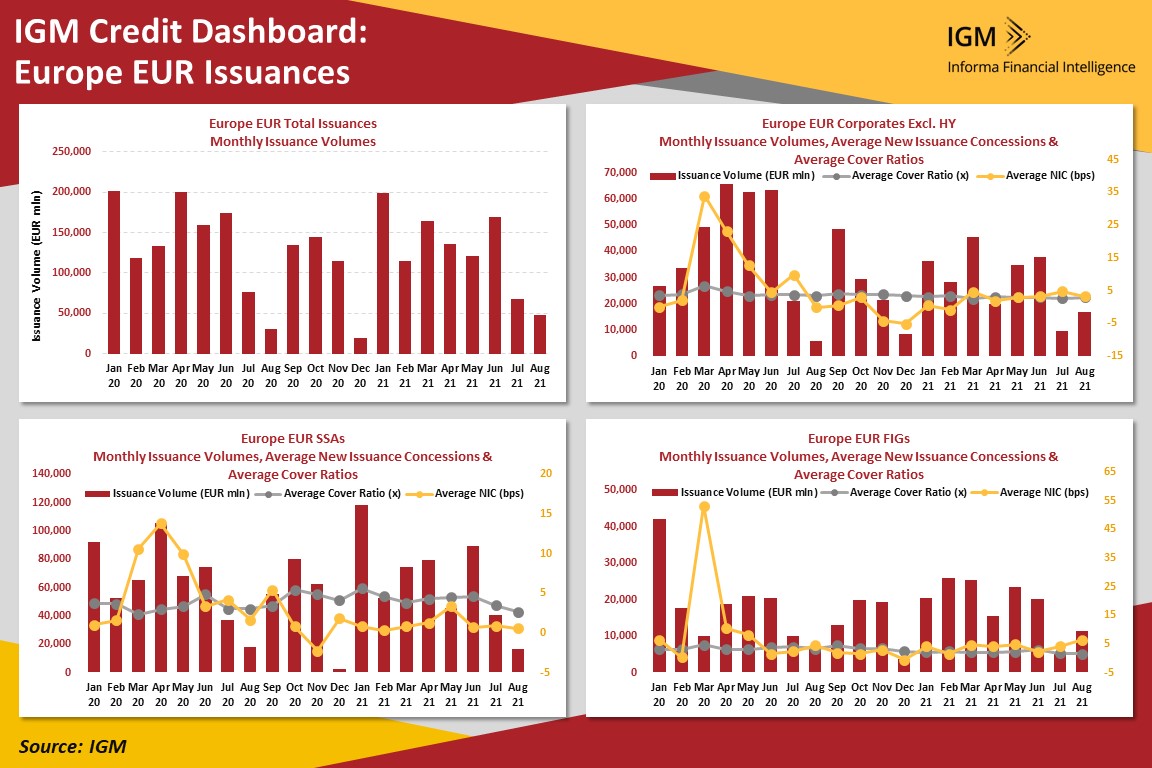 The European primary maintained a measured pace in August as seasonal influences took a stronger hold. Falling SSA and HY supply drove an overall reduction in volumes, partly offset by a pick-up in FIG and high-grade Corporate supply versus very low levels seen in July. Total monthly supply at EUR47.755bn was the slowest month this year but was still sufficient to push the European primary market past a major milestone, taking the 2021 y.t.d. tally past the EUR1tn mark.

That all came during a month which saw global markets endure some mid-month jitters amid concerns over the impacts of potential Fed tapering and as the emergence of Covid variants weighed on recovery hopes. There was little sign of buyers deserting the credit complex though where the average cover ratio (all asset classes) nudged higher on the month as investors chased down the reduced amount of paper on offer.

Corporates (ex HY): Corporates bucked the slowing trend although that was partly due to a collapse in volumes in July. August supply showed that buyers still have plenty of cash to put to work with a EUR5bn M&A driven 5-part sale from German real estate firm Vonovia becoming the largest single EUR corporate trade of 2021 on very healthy demand of EUR17.2bn. Reflecting the still generally healthy levels of demand, average cover ratios rose on the month.

FIG (ex-covered): August activity was packed into the latter part of the month with EUR10bn (87%) of monthly supply squeezed into the final seven sessions of the month as issuers considered the merits of stealing a march on competing supply which typically ensues in September. There were some tell-tale signs that buyers were becoming more price sensitive though with investors demanding higher New Issue Concessions, perhaps with the expectation that it could become more of a buyer’s market in September as supply picks-up.

SSA: A general boycott by sovereigns made for the second slowest month since the onset of the pandemic. Finland was the sole sovereign issuer to tap the euro market, as was also the case in the previous year. Among the supranational bodies, the European Union was conspicuous by its absence. The various German states provided pipeline activity throughout the month, representing 5 of the 13 total deals, but only 14% of deal volume. With that, average cover ratios declined for a second month in August, with investors evidently less keen to pile in to what were generally negative yielding options where all but two of the month’s SSA trades priced below the zero rate bound.

HY (Corporate): The busiest August in a decade it might have been but by the end of the first week, HY-rated corporate issuers were finished for the month and heading to the beach. The following three blank weeks made for the longest run of zero issuance since the complete washout of August 2020. On the plus side, the primary lull gave markets an opportunity to absorb the record amounts of supply so far this year which has been lapped up by investors seeking yield and a little more inflation protection from shorter duration and (relatively) high coupon paper. 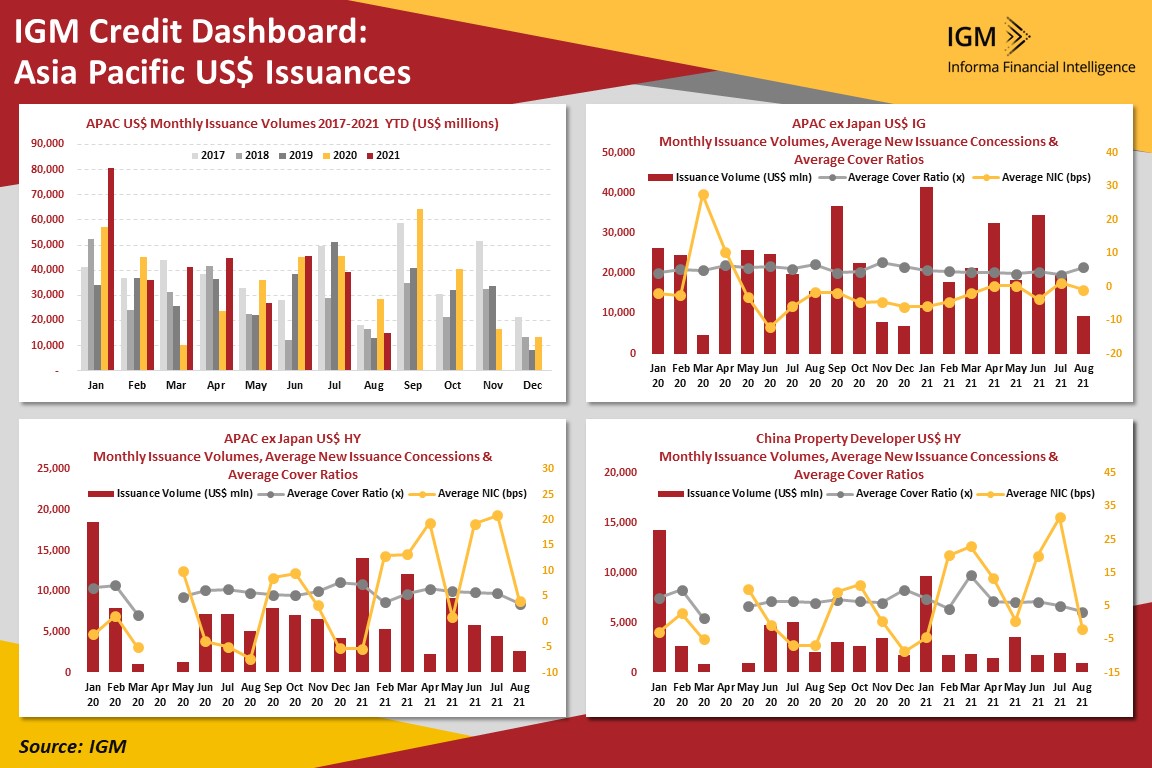 August is historically one of the slowest months of the year in the APAC US$ primary bond market and this year was no exception. The month closed out at US$15.119bn (including Japan), a notable decline from the US$38.108m which priced in the previous month of July and the lowest monthly volume since December 2020.

Issuance volume was also down sharply versus the same month last year which produced US$28.577bn, although August 2020 was something of an anomaly as issuers continued to make use of the window of opportunity to lock-in funding amid an uncertain post-covid economic outlook, with this year's monthly total more akin to August issuance volumes in previous years.

APAC non-Japanese investment grade issuance fell to US$9.315bn in August 2021, one again down significantly from the US$19.457bn that materialised the previous month and marking the lowest volume since December 2020.

That light supply supported a steady grind tighter for Asiadollar investment grade spreads which narrowed by around 16bp over the course of the month to levels not seen since before the start of the covid-19 inspired sell-off in late February 2020.

The constructive tone was also attributed to some dovish rhetoric from Fed Chairman Powell and some renewed optimism surrounding the future of China Huarong Asset Management following news of the Chinese bad debt manager's capital restructuring plans unveiled earlier in the month.

Those investment grade issuers which did raise funding in August were rewarded with some comfortably oversubscribed order books, as illustrated by the average cover ratio which came in at a solid 5.82x, up from 3.62x on average the previously month. That in turn allowed issuers to lock-in some attractive funding costs as highlighted by the average new issue concession of -1bp (negative).

APAC US$ high yield issuance was also light in August 2021 at US$2.694bn, down from US$4.493bn the previous month of July and well below the US$5.15bn of supply sold by the asset class in the same month last year. This was once again spearheaded by a paucity of supply from Chinese high yield property developers which managed to get just US$930m of issuance over the line in August.

On a more positive note, a widening of spreads fuelled by ongoing concerns surrounding the financial health of China Evergrande which characterized price action in the earlier part of August was reversed in the latter part of the month. That in turn at least helped a trio of higher beta property developers tentatively re-open the primary market with conservative 363/364-day transactions in the final week of the month. 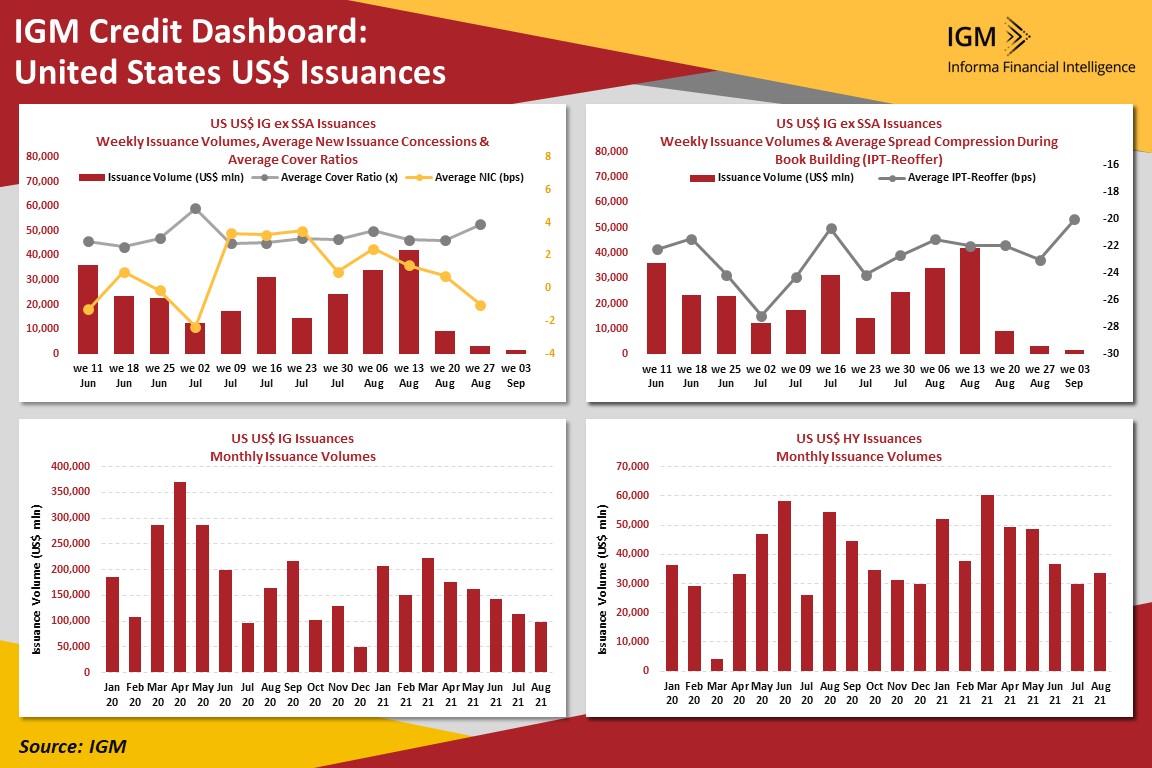 US IG EX SSA issuance in August recovered slightly to US$89.80bn versus US$87.70bn in July, pushing the YTD volume above US$1tn. August's issuance exceeded expectations, not only topping the average estimate of US$80.1bn, but also topping the decade-long average of US$76.701bn. That said it was still only the fourth busiest ex-SSA issuance August on record. It also marked the second straight month that volumes were well below US$100bn, with the last full week ($3.15bn) turning out to be the slowest ex-SSA issuance week of the year.

As it stands., the pace of ex-SSA issuance this year is lagging behind last year's rather abnormal record issuance by 29%, though outpacing a more normal 2019 by a similar 29%. The Street, on average, is looking for annual ex-SSA volume to get as high as US$1.3trln, that means US$300bn before the year is out.

As for overall (SSA-inclusive) issuance, August saw very little in the way of SSA issuance, with a mere five offerings priced, raising US$8.855bn in the process. That brought overall IG volume for the month to US$98.660bn, topping all but the highest estimate of US$105bn.

On the year, SSA issuance stands at US$266.98bn, bringing year-to-date overall issuance to US$1.271.248bn, some 25% behind last year's pace ($1.697.892bn) when we witnessed more and more sovereigns, and their related agencies, as well as the supranationals, raising a record amount of capital in an effort to combat the persistent spread of the COVID-19 virus.

Befuddled by the uncertainty of the timing of the Fed's change in monetary policy, the broader markets fought to find direction in August, which made potential borrowers hesitant to tap the market. That hesitancy could be seen in the performance of this month's pricings, which showed signs of investor fatigue.

Domestic borrowers dominated this month's ex-SSA issuance volume, accounting for 67% of the total volume. FIG issuance made up 47% (30% domestic/17% Yankee) of August's total, followed by corporates, which made up 41% (35% domestic/6% Yankee) of the volume, while the utility sector made up the other 8% - all domestic – and SSA issuance chipped in 7%.

According to our issuance poll results, the average estimate is calling for US$136.72bn to cross the tape in September. While topping the 10-year September average of US$127.617bn, should that number come to fruition, it would only rank as the fifth busiest September on record. The estimates ranged from a low of US$130bn, to a high of US$160bn.