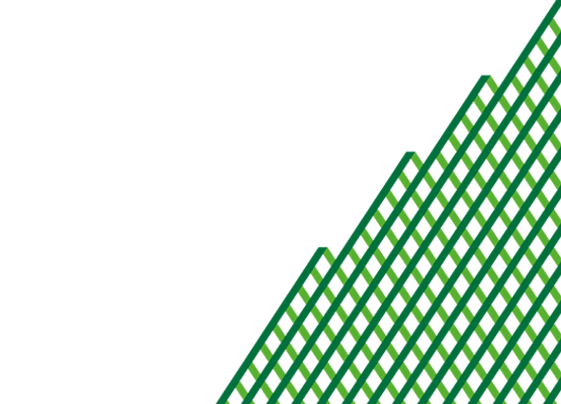 DOWN BUT NOT OUT 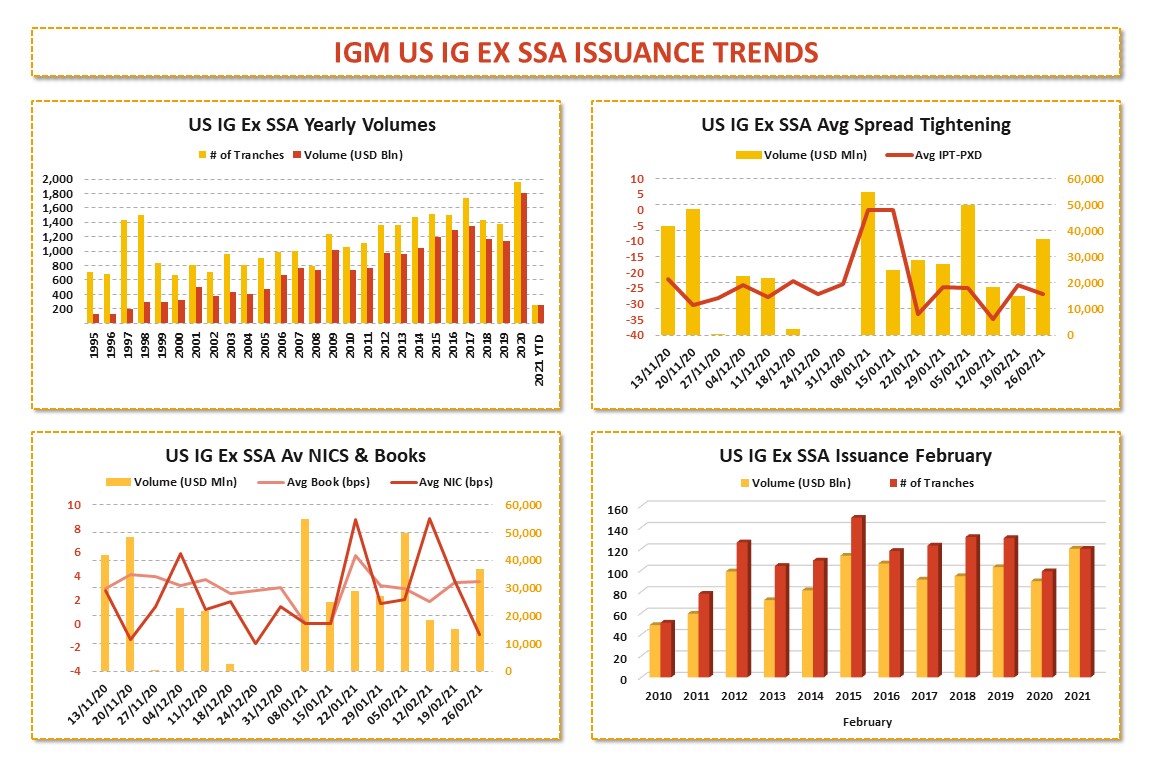 US Ex-SSA IG issuance volumes, whilst 11% down from January, set an all-time February record of US$120.07bln from 71 deals and 119 tranches, eclipsing the prior all-time record volume for a February of US$113.543bln set in 2015. It marked only the fourth time in history that February ex-SSA issuance has topped the century mark. Year-to-date, ex-SSA issuance stood at US$255.64bln, 9.7% more than was issued at this time last year.

Most of the drive to supply came from the continued strength in investor appetite for high-grade primary bonds – mostly captive but also foreigners and investors looking for diversity, safety with positive yields. Front running the month was a jumbo deal from Apple/$14bln, the largest deal of the year and that from Boeing/$9.825bln, the fourth largest deal.

The month's average IPT-PXD came in at -25.1, average book cover at 3.23x and average NIC -0.47, slightly less conducive than in January where the latter averages were at -25.1, 3.04x and -2.21 respectively. However, it was nonetheless deemed resilient, set against the backdrop of rising long-end yields and a more volatile global market backdrop.

Looking ahead, March has always been known as a very prolific issuance month, ranking as the third busiest issuance month of the year over the past decade. Over the past 10 years, on average, the month of March regularly yields US$129bln in new ex-SSA issuance. We have seen as little as US$75.162bln (2013), and as much as US$258.170bln (2020) come to market during the month of March. This March, the Street is expecting an average US$144.7bln. While it may be a tall order to expect a repeat of last March's performance, now that businesses appear to be getting back on their feet and the need to hoard cash seems to have waned, there are three other factors that could fill in the issuance gap.

First, the rising interest rate scenario which, by all indications, is prompting potential borrowers to move up their refinancing and capital expenditure plans by tapping the public debt market sooner rather than later. Secondly, we have seen a flurry of M&A announcements of late – with 34 in February. While not all will result in a public debt offering, and the closing of these deals may be months away, there appears to be somewhat of a trend in companies announcing M&As and then quickly raising the financing for it through a bond issue. It appears companies are opting to tap the market now when they are assured of strong execution results rather than wait for a month or two and face the risk of volatility and rising interest rates.

Lastly the FCC announced the winners of an auction for the license to use important airwaves that are ideal for 5G. The big winners were Verizon and AT&T, who will almost certainly use them to build out a faster, more powerful 5G network. The three largest US wireless companies combined bought US$78bln worth of the C-band spectrum. That leaves the door open for a new wave of issuance as the winners may be forced to raise additional capital to fund the network buildouts. 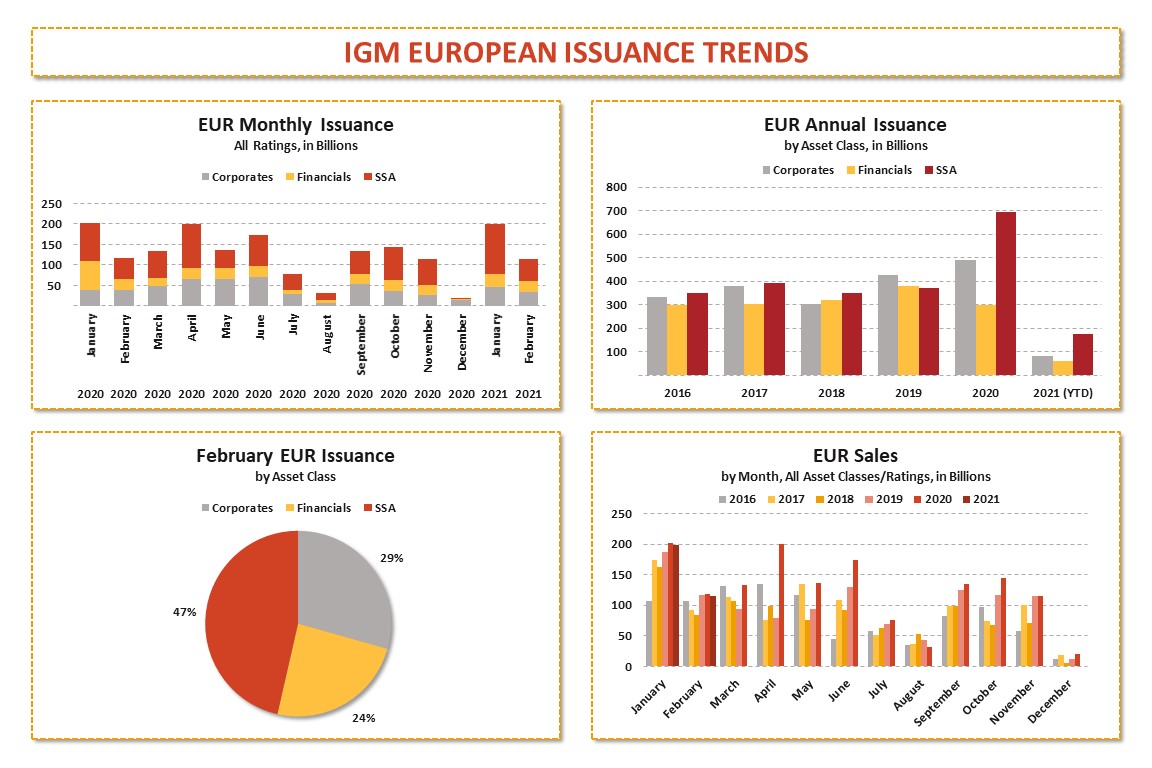 The European credit market slowed in February 2021 after a predictably hectic start to the year, with a total of EUR115.115bn raised via EUR denominated debt sales (all asset classes/ratings), a 42% drop versus January. All asset classes witnessed slowing activity, led by a sharp decline in SSA after a record month for the asset class in January.

While the frantic pace in January could not be maintained, SSA remained the single most active sector (47% of all EUR supply) as issuers continued to turn to debt markets to meet pandemic related needs. A key theme here was that borrowers shifted their focus to longer maturities with 61% of EUR SSA paper issued in the 10yr+ tenor (vs 36% in January).

Corporates came in second spot (29% of overall issuance), of which over a quarter of IG rated corporate supply came in ESG format, setting the primary corporate market on course to beat 2020's all-time annual ESG record of EUR40.18bn. H&M's debut EUR500m 0.25% Aug 2029 Sustainability-Linked Bond - just the second corporate bond in the format of 2021 - stood out with a 7.6x covered book.

Financial supply remained measured in February, leaving the sector a very substantial 39% behind the 2020 pace as the availability of cheap and easily accessible central bank funding continued to hamper supply. That dynamic remained most palpable in Covered where volumes are currently running almost 66% below last year. Bucking the broader slowdown, unsecured Green Bond supply more than doubled in February as eight borrowers raised EUR4.8bn on demand which exceeded EUR13bn, with investors still thirsty for ESG investments. Two-part and longer dated deals were popular, with Rabobank pushing the boundaries via a 12-yr Senior Non-preferred while in covered, RLB Vorarlberg (15yr) and NN Bank N.V.(20yr) sold the longest ever bonds in the Austrian and Dutch jurisdictions.

Moving into March, seasonal patterns suggest that issuance volumes can be expected to accelerate. Four of the five previous years saw volumes rise in March with the average increase vs February standing at 13%. It remains to be seen, however, the extent to which rising yields, expectations of higher inflation and increased volatility will dampen activity, themes which all gained increased traction during the month of February. 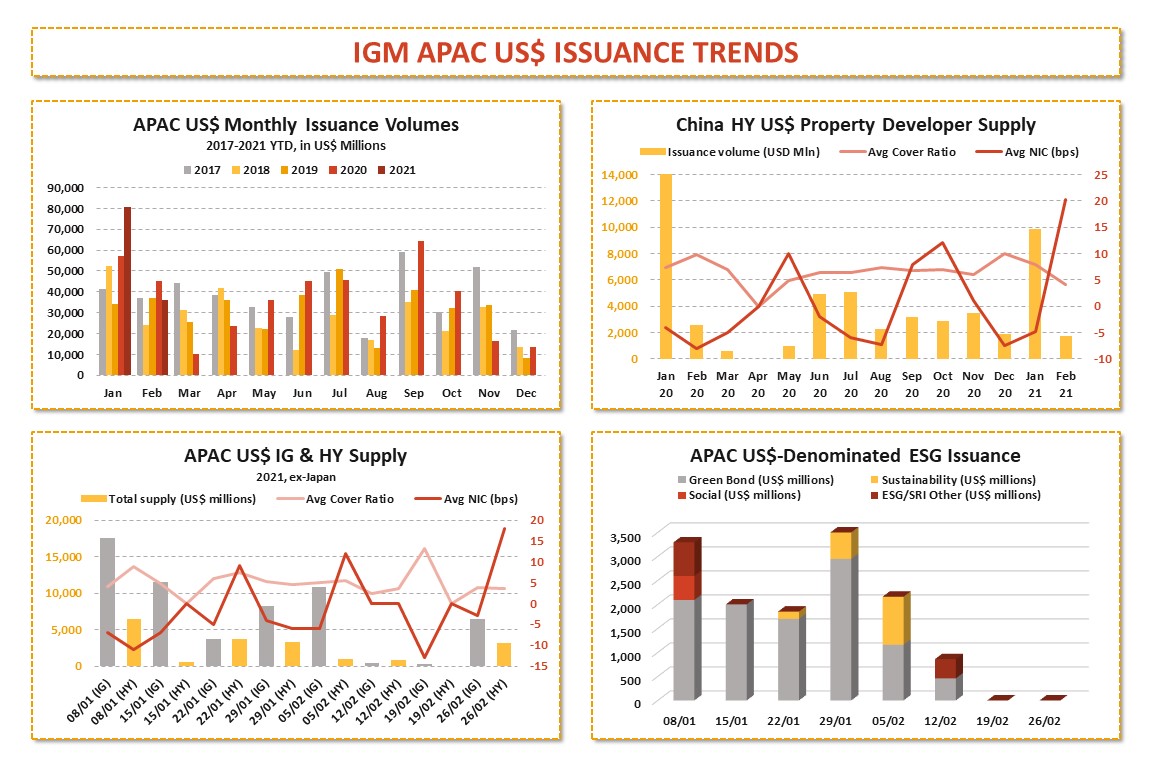 APAC US$ supply spanning all rating classes slipped in February 2021, with 42 issuers pricing a total of US$36.005bn of offerings via 58 separate tranches (including Japan). That represented a 55.3% drop from the seasonally active month of January 2021 which produced a record US$80.469bn of issuance.

February's monthly volume was also lower compared to February 2020's US$45.151bn and the US$36.99bn placed in the same month in 2019 as the Lunar New Year holidays which fell between February 11th to 17th in mainland China this year largely kept issuers on the sidelines.

Broader risk market volatility amid inflationary pressures also weighed on volumes and whilst the market regained some liquidity as issuers returned following the regional holidays, selective investors appeared to be more comfortable with lower beta high grade names against a backdrop of higher underlying yields.

Offshore issuance by Chinese high yield property developers was otherwise kept to a minimum not only by the holidays but also amid a ripple effect from heightened liquidity concerns surrounding China Fortune Land Development. Meanwhile, high yield property issuers which did manage to fund were forced to offer inflated new issue concessions while book sizes have continued to decline. This was also consistent with pressure seen in the secondary market on some high yield developers perceived to have weaker credit metrics prior to the Lunar New Year break.

Meanwhile US$-denominated ESG issuance in Asia Pacific fell sharply in February following an explosive start to the year, though continues to be a recurring theme and is expected to pick-up again into the latter part of Q1 2021. 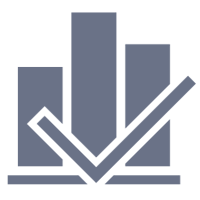 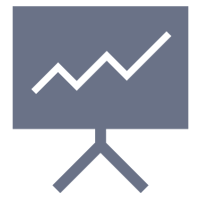