The HKMA, on 26 August, announced it had completed a review of its framework for the provision of liquidity to Authorised Institutions (AIs). A new Resolution Facility was introduced to provide for the scenario in which resolution powers under the Financial Institutions (Resolution) Ordinance (FIRO) are exercised by the Monetary Authority as the Resolution Authority.

The HKMA has also taken the opportunity to communicate and restate the framework for provision of liquidity, incorporating certain refinements to the prior arrangements where appropriate, so as to foster a better understanding on the part of the market of the different facilities through which the HKMA makes temporary HKD liquidity (i.e. not in the nature of capital support) available to AIs to maintain integrity and stability of the monetary and financial systems in Hong Kong.

We think the background of this announcement is growing concerns about a potential capital flight, as a result of the ongoing political unrest. It was widely reported some days ago that the Hong Kong government would not rule out an enactment of the Emergency Regulations Ordinance, which was last used in 1967, to stop the months-long political unrest. Before that, it was confirmed that Chinese troops were gathered in Shenzhen, getting ready to enter Hong Kong and quash the protests there.

We believe capital flight is now the most important theme in the HKD market. HKD funding remained tight in August 2019 despite no quarter-end pressures and limited IPO-related funding squeezes. In our view, tight HKD funding could be due to banks preparing for a possible decline in the aggregate balance from capital outflow risks. As a matter of fact, many HK-based bank customers have recently been particularly keen on turning their HKD deposits into foreign currencies ones or switching their deposits into offshore accounts, amid the political uncertainty.

Despite that, the HKD aggregate balance remains well above pre-GFC levels (chart 1). However, as other indicators tracking HKD fund flows, such as the banking system net FX position, are only available with a two-month lag, and July data for the deposit base have not been released, we still do not have a full picture of HKD fund flows.

Given Hong Kong's Linked Exchange Rate system, capital flight should be reflected in domestic interest rates and FX forwards. Available data on aggregate balances suggests no sign of significant capital outflows as of yet. However, the 12-month USD/HKD forward rate (chart 2) is already at 7.8540, above 7.8500 (i.e. the weak side of the 7.7500-7.8500 convertibility undertaking). This is the first time since Jan 2016 the 12-month forward rate has traded above 7.85. Unlike in Jan 2016, the 12-month forward rate this time around have been standing above 7.85 for a much longer period of time (note: already over 20 trading days). That suggests long-term liquidity is reflecting a very likely emergence of capital flight in the long run and/or people are turning skeptical about the sustainability of the USD/HKD peg twelve months later. 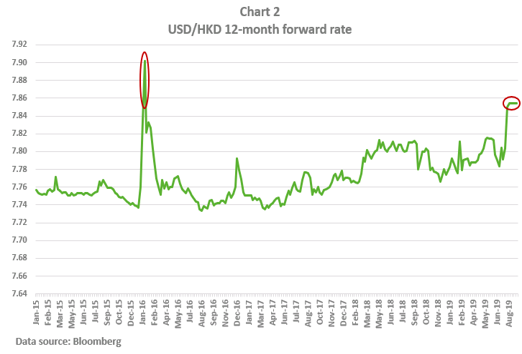 Last but not least, tightening liquidity and as a result of widening carry given by HKD over USD has dampened Hong Kong banks' interest in holding foreign currency assets (say fixed income instruments). Chart 3 shows the net foreign currency assets held by Hong Kong banks was already back to sub-HKD800bn level in July. However, this logic may no longer work if political unrest escalates, making people lose confidence in HKD and think "safety" is far more important than "carry".