With global markets whip-sawed by shifting developments in Sino-US trade talks, the US three and five-year sovereign bond yield curves inverting and fixed income investors looking ahead to next week’s meeting of the European Central Bank (ECB), flows to EPFR-tracked fund groups during the first week of December ranged from negative and subdued. The only major groups to absorb over $2 billion were Europe and Japan Money Market Funds and all Emerging Markets Equity Funds.

Italy’s more conciliatory stance on its proposed 2019 budget took some of the pressure off Europe Equity Funds, although they collectively recorded their 13th straight outflow, and dedicated Italy Equity Funds saw a nine-week run of outflows come to an end. Europe Bond Funds, meanwhile, extended their longest redemption streak since 4Q11.

Overall, investors pulled $5.1 billion out of all Equity Funds, $833 million from Alternative Funds, $8 billion out of Bond Funds and $42 billion from Money Market Funds during the week ending Dec. 5. The bulk of the Money Market Fund redemptions came from US Money Market Funds, which nevertheless remain the leading fund group in terms of net inflows since the beginning of the third quarter. Balanced and Total Return Bond Funds, the two major multi-asset fund groups, have fared worst over that period and saw another $4.2 billion flow out during the latest week.

At the asset class and single country fund levels, France Equity Funds recorded outflows for the ninth time in the past 10 weeks and Russia Equity Funds for the 12th time since mid-August while Greece Bond Funds posted their biggest outflow since 1Q16. Redemptions from Convertible and Inflation Protected Bond Funds hit 11- and 38-week highs respectively and Municipal Bond Funds extended their longest run of outflows since 4Q13. 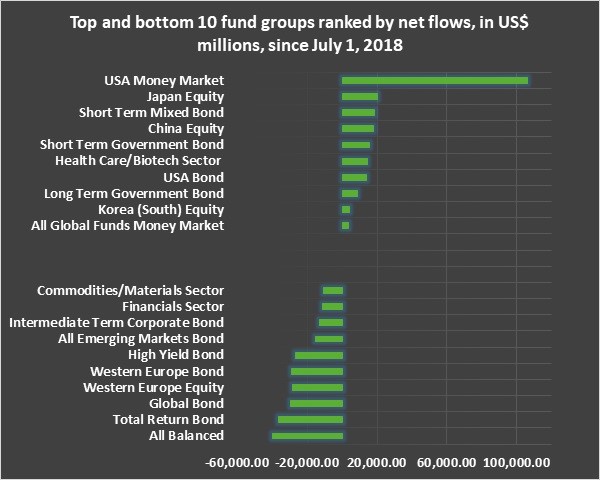