Does today’s monetary policy leave investors in purgatory or hell? A view from industry experts

Does today’s monetary policy leave investors in purgatory or hell?

A view from industry experts

Last month Informa, EPFR and Fintech company ClearMacro held an evening event: The 2020 Road to Returns, where industry experts were presented with the question, “Does the current monetary policy environment leave investors and financial professionals in purgatory or hell,” the panelists were split down the middle.

“On a scale of one to ten, with one being purgatory and ten being hell, we are at 9.9”, said Bob Parker, Chairman of the Asset Management and Investors Council, who felt diminishing returns and a growing list of unintended consequences characterize this era of extraordinary monetary policy as it moves into its second decade.

“The key point [in this ongoing debate coined by Ben Inker from GMO] is counterfactual: what would have happened if central banks hadn’t acted as they did?” countered Andrew Pease, Global head of investment strategy for Russell Investments, who believes that we are going through an extended period of very low interest rates rather than outright financial repression.

That could change. “I think a phrase we’re going to have to lean over the next business cycle is MMT -- modern monetary theory, or magic money tree theory, as some are calling it”. From an investment perspective, Pease said, being in hell is simpler, “The best you are going to get is your risk premium, so you might as well be fully invested, but if you are in purgatory [with its implication of a return to ‘normal’] then there’s a big revaluation coming.”

Governments and central banks will do what they can to stop that happening, said Arnaud Gandon of Heptagon Capital, who believes policymakers are now committed to banishing the business cycle. “What is wrong with a good, old fashioned recession?”, he asked before answering his own question by pointing to the increasingly political nature of economic policymaking in Europe and other developed markets.

This politicization of the process is a key reason that Rebecca Harding, CEO of Coriolis and an independent economist, believes the current monetary policy environment is closer to hell than to purgatory. In Harding’s opinion, the role of trade in determining global prices sharply limits the impact of quantitative easing programs, and that impact – already limited when it comes to the real economy – will be further compromised by the ‘weaponization’ of monetary policy. The legal framework allowing the US to designate foreign central banks as currency manipulators is a case in point, she argued.

The evening wrapped with all our guest panelists expecting to see more of the same on the ‘Road to 2020’. “In the event of another downturn “fiscal policy is the next cab off the rank,” says Pease, who expects that policymakers “will throw the kitchen sink” to limit the impact. The lingering question raised by Harding remains: “Are we ever going to see normal economic policies?” 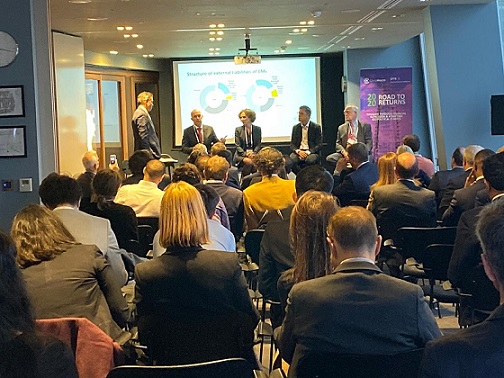