After bonds were sold off continuously for almost four weeks, CBRC chairman Guo Shuqing on 3 June surprisingly talked about the importance of financial risks control in a conference. Shortly after that, MOF on 8 June expressed its concerns over financial risk management in a statement after holding a conference with local government ﬁnance bureau heads. The statement highlighted the need to strengthen scrutiny over ofﬁcials who borrowed local debt in a way inconsistent with laws and regulations and warned local officials not to ignore debt risks. The statement did not provide specific numbers, but the tone was strong enough to make many people recall the policy theme of financial deleveraging that the President pushed for during 2017-2018.

With the economy still struggling to recover from the recession caused by COVID-19, we are quite surprised by the central government being in such a hurry to stress financial risks control. In our view, besides the upcoming issuance of a large amount of central government special bonds, there should be two things at least making the policymakers worried about a deterioration of the leverage outlook of the whole system.

Chart 1 shows that the leverage rate of the deposit taking institutions and financial institutions is back at around 11% after reaching as low as 10% in the summer last year. However, bear in mind, it was only at around 12% when President Xi first talked about the importance of financial risks control in March 2017 and then pushed for financial deleveraging over the following 18 months. With many enterprises being in liquidity/financial stress post the COVID-19, we think policymakers are aware of the risk of a strong bounce in the leverage rate in foreseeable future. 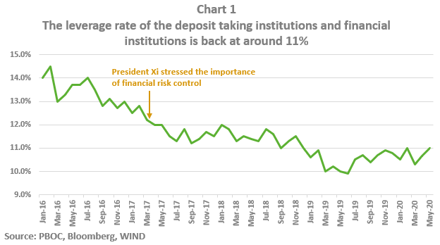 Chart 2 shows structured deposits have grown strongly since the outbreak of COVID-19 in Jan. That obviously is a result of a surge of demand for high-yield deposits which are backed by various types of debt instruments in the ongoing low interest rate environment. 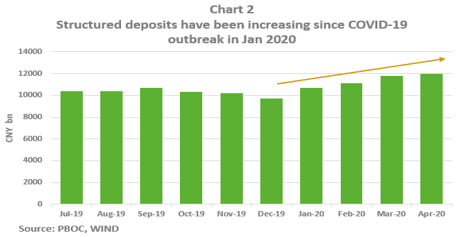 Given the prevailing economic outlook, we don't think the central government will push for financial deleveraging, if at all, as aggressively as in the period of 2017-2018. However, we don't rule out a potential clamp-down of some improper financing in the very near future, which in turn may be bearish for the bond market. Don't forget the China bond market did experience a multi-month bear run right after President Xi delivered his speech about the importance of financial risks control in March 2017.