16 Jun 2020 by Christopher Shiells
Topics: Industry News |
Provided by IGM FX and Rates |
Get a free demo
Login to IGM 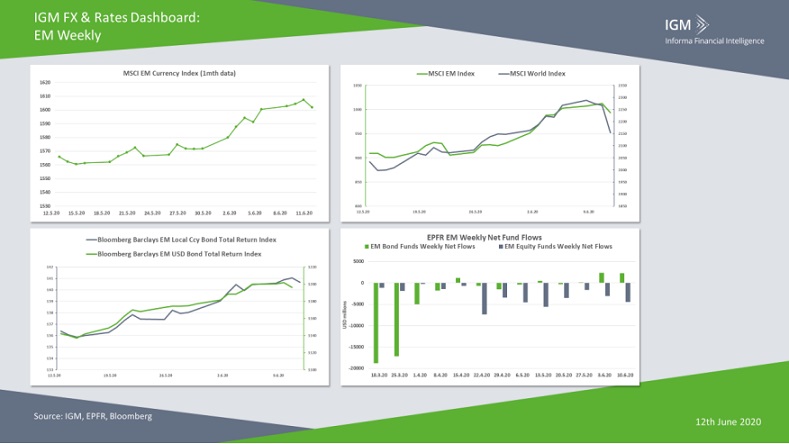 EMERGING MARKET LOCAL CURRENCY BONDS have been supported by slowing CPI readings and continued signals that central banks can keep easing policy or commit to prolonged periods of expansionary policy. The CPI inflation weighted by the JP Morgan GBI-EM GD declined to a record low of just 2.3% on a y/y basis in May, based on the 58% of index constituents, which had reported inflation as of the end of week to May 5th (Ashmore Investors). This has helped drive the yield on the GBI-EM GD to drop to 4.6%.

EM central banks have been able to ease monetary policy in a crisis and purchase local bonds for the first time ever, which according to the BiS has been successful in restoring investor confidence and did not lead to higher inflation expectations. Also aiding the appeal of EM bonds is the fact that EM currencies have also continued to see a rebound in the first week of June, continuing a trend since the end of March.

Headlines from EM CREDIT MARKETS have also been positive over the last few weeks, with credit spreads continuing to narrow, fund flows returning (EPFR data showed three weeks of net inflows) and the primary market opening up to a more varied array of issuers post-Covid-19.

However, all the above masks the fact that for many sovereigns, governments are facing the double shock of a humanitarian and economic disaster due to the coronavirus pandemic. More than 100 nations have asked the IMF for help. The fear is that weaker local currencies, dwindling foreign reserves and slower global growth, will make it harder for some developing countries to keep up on their external debt payments. Countries are having to spend more of their resources on servicing debt than responding to the crisis, and that is why many are asking for a freeze.

What has been done so far?

Leaders of the G20 have backed temporarily waiving debt payments for some the world's poorest countries, mostly in Africa. The IIF, which represents the world's biggest banks and financial institutions, is helping spearhead the voluntary initiative. The IMF has granted debt waivers to at least 27 countries.

The Global Times reported over the last week that China has suspended debt repayment for 77 EM countries as they work with the G20 countries to carry out the debt relief. If this is confirmed, Chinese debt relief would be positive for countries with large indebtedness to China that are currently requesting IMF assistance including Angola and Zambia.

What about private investors?

Today, emerging markets owe money to a much wider range of creditors than in past history as capital markets have opened up, and so for debt relief to work, there also needs to be the backing of hundreds of private creditors (hedge funds, SWFs, pension funds etc). Private creditors representing more than USD9tn of assets under management have already formed a group to negotiate debt relief for African nations. They have argued that unilaterally halting payments could lock nations out of debt markets, making matters even worse for borrowers.