14 Jul 2020 by Christopher Shiells
Topics: Industry News |
Provided by IGM FX and Rates |
Get a free demo
Login to IGM

US June non-farm payrolls data helped spur a risk rally after jobs increased by a forecast beating 4.8mn. Coupled with a round of strong manufacturing PMIs in June across the globe, this has helped support the bullish view that the global economic rebound from the Covid-19 pandemic can be V-shaped (see below for the JPM Global Manuf PMI) and spurred the biggest weekly gain in emerging-market stocks (MSCI EM Index) in a month.

However, there are many questions and uncertainties around the durability of the recovery. The start of Q3 has already brought with it a pause of re-openings for many US states and in some a fresh raft of restrictions, which will likely mean the data could again lose momentum.

This means that the global economic recovery is unlikely to be a smooth linear process, rather a bumpy path as companies, households and governments look to strike a balance between economic activity and public health. The Fed's Barkin summed it up when he likened it to riding the elevator down, but needing to take the stairs back up.

As mentioned above, this pace of recovery is unlikely to be sustained and there is still a long way to go for economies to recover what was lost in the Mach-April carnage. A complete rebound in GDP to pre-crisis levels looks very unlikely in 2021 and will take until the virus is controlled. 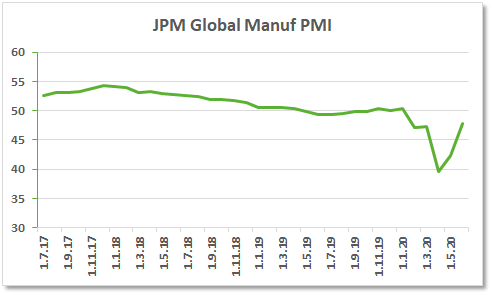 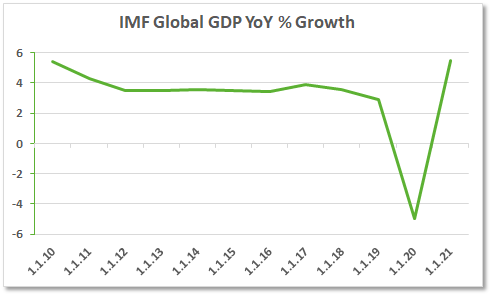 The CEE region has not escaped the pandemic, but compared to Western Europe saw relatively limited outbreaks and lower death tolls (see below for latest data as of 5th July):

The CEE governments all introduced early lockdowns to limit their outbreaks, but of course like the rest of the world this has led to a severe economic contraction. The CEE region was also hit by the demand fallout from the Eurozone and large capital outflows. The EPFR country flows data shows investors withdrew USD2.27bn from funds investing in these countries from the end of February (see dashboard below).

The Czech economy is set to see the most negative growth in the region this year (-8.0% vs +2.3% pre-crisis), whilst the Hungarian economy is expected to contract 7.0% in 2020 (vs growth of 3.2% pre-pandemic, according to the EC). Note the NBH still has a wildly unrealistic forecast that Hungary can achieve growth this year of 0.3-2.0%. As the dashboard shows, both the Czech Rep and Hungary have seen the biggest downgrades of GDP growth forecasts for 2020, which partly reflects the mix of the large openness of these two CEE economies, as well as their exposure to the cyclical auto industry. The Czech Rep headed into the lockdown in a weaker position, with a Q1 GDP contraction of 2.0% y/y, vs growth of 2.2% and 2.0% in Hungary and Poland, which suggests the Q2 contraction will not be as severe as in Poland and Hungary.

The manufacturing PMIs (see dashboard below) are an early indicator that CEE economies are through the worst and a gradual recovery lies ahead, but were not yet in expansion territory during June. The rebounds forecast for 2021 are expected to be strongest in the Czech Rep and Hungary (vs extent of contraction in 2020). 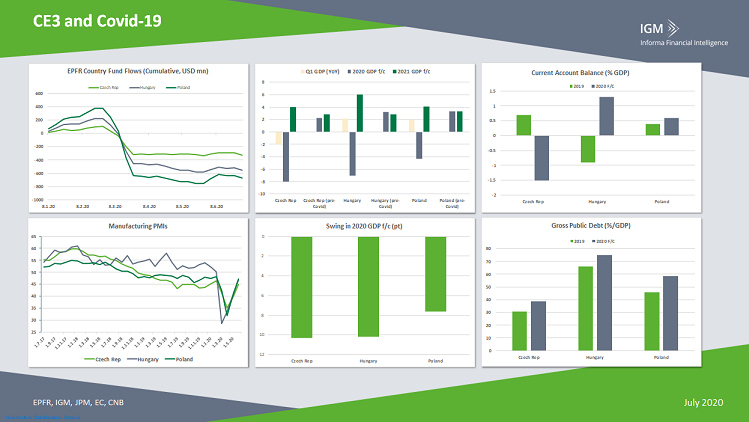 Below we summarise the monetary and fiscal responses to the Covid-19 pandemic and what this means for debt levels (see dashboard):

Looking at the predicted strength of the economic rebound, the policy mix, the external balances and debt levels, we believe the CZK should outperform in the coming months, whilst the PLN will underperform, 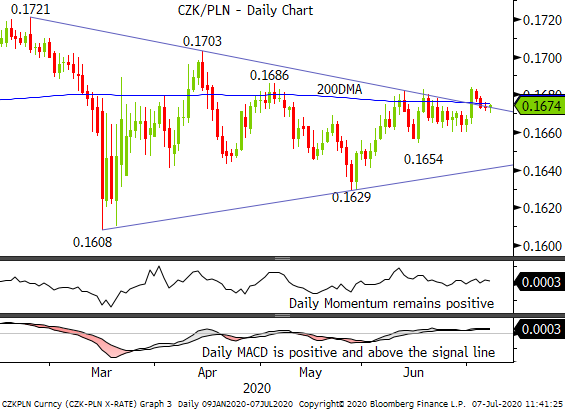