The outcome of the meeting between Trump and Xi at the recent G20 summit was mostly as expected, with a delay in pending US tariff increases agreed while negotiations continue. No surprising progress was announced on the main issues in the dispute, except partial easing of US restrictions on exports to Huawei.

Equities
Global equities responded very positively to the outcomes of Trump-Xi meeting at G20. As far as Chinese equities are concerned, data suggests that mutual funds were underweight by 320bp, the highest on record (chart 1). Unless the US-China trade dispute unexpectedly escalates again, there is a good chance the Shanghai Composite Index will re-visit the 3200 level in Q3, up around 5% from the current level. 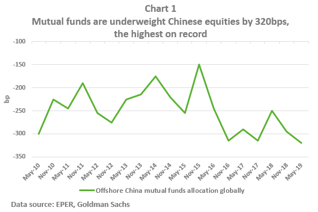 Rates
In regard to onshore CNY interest rates, in our view there is room for them to go lower. A failure of PMI to rebound in June suggests the risk of slowdown is increasing. On 2 July, Chinese Premier Li Keqiang said China will make cuts in banks' reserve requirement ratios and seek to lower real interest rates to help reduce funding costs for small firms. Now, the baseline scenario is PBOC will opt for further RRR reduction (either broad- or target-based) in Q3. Whether there will be benchmark interest rate cuts should be subject to the outcome of the FOMC meeting at the end of July. No matter what, the overall outlook is supportive for China Government bonds. We reckon the 10-year CGB yield will reach 3% or lower later in Q3, at least 17bp below its current level (chart 2). 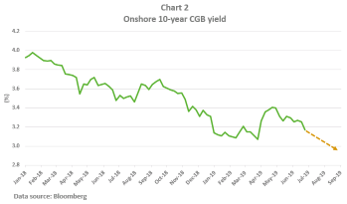 Last but not least, a de-escalation of the US-China trade tension post G20 prevents China from seeking CNY depreciation to offset losses in trade competitiveness. That plus better inflows to CNY-denominated risk assets will likely prompt a more sustainable strengthening in CNY FX against USD. Though USD/CNH's upside visit of 6.90 in the very short run amid imminent PBOC liquidity easing should not be ruled out, we expect a return to the 6.70 level will happen eventually in the second half of Q3 (chart 3). 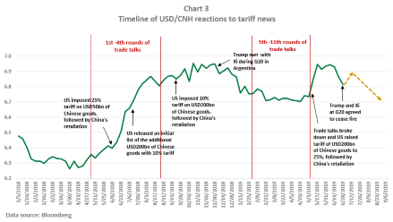