China Insight: A return of focus to credit clean-up in 2021

Concerns over China corporate credit risk have come to the forefront since the beginning of Q4, highlighted by three high-grade issuers' defaults:


Coincidentally, all of these three issuers are state-owned enterprises (SOEs) in nature. This, to a certain extent reflects central government's bias in favour of a return to policy normalisation and possibly a second round of financial deleveraging (following the first round in 2017). Chart 1 shows that China's total debt to GDP ratio may have reached as high as 290% by the end of this year, so there is a need for deleveraging regardless of the defaults YTD being smaller than those in the previous two years both in terms of the total number and the total size of events (chart 2). From the perspective of the policymakers, with various kind of economic activities having returned to their pre-COVID levels, a return of the focus to credit clean-up should be more beneficial to long-term economic development. 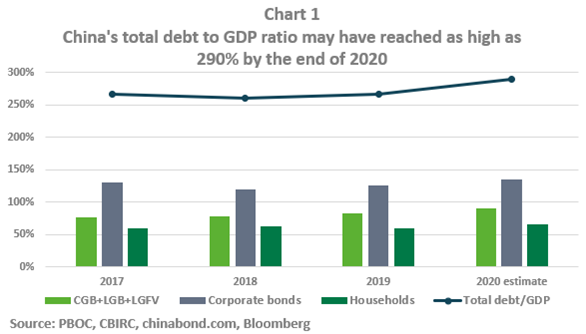 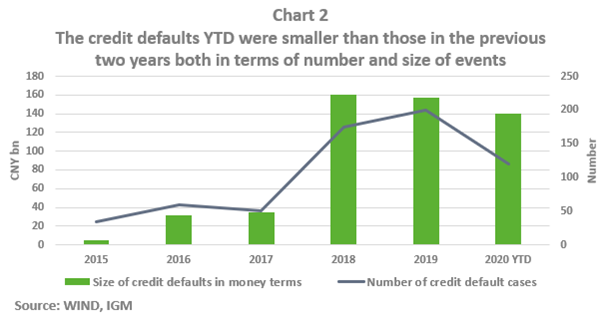 "Tightening" is more likely to be the main theme not only for the monetary policy but also for the fiscal policy in 2021. Given the fact that China has been very effective in controlling the COVID pandemic and the domestic economy has been recovering rapidly, the central government should see a decreasing need for counter-cyclical policies to shore up growth. As such, we expect the central government will lower the fiscal deficit ratio back to 3% in 2021 from 3.6% in 2020 (chart 3). 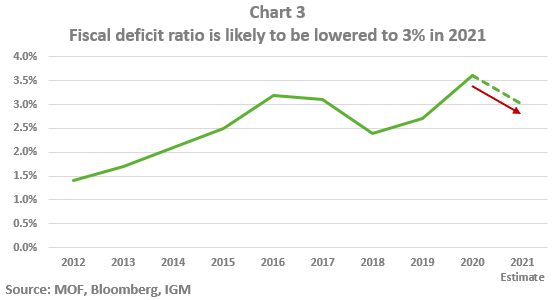 On the back of a lower fiscal deficit ratio, we will likely see a 10-15% decrease in government bond supply in 2021 (chart 4). That being said, support to China onshore bond sentiment may be more than offset by less ample liquidity and a tighter credit environment as a result of central government's bias in favour of credit cleanup. 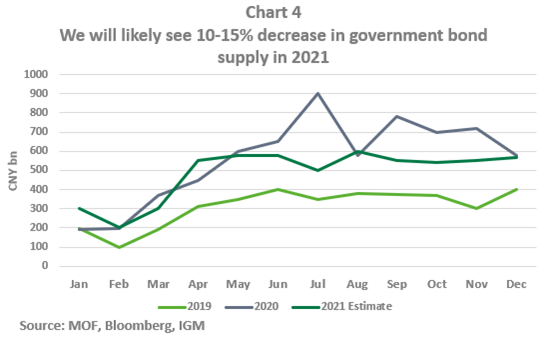 In regard to foreign ownership of China bonds (chart 5), it will likely increase further in 2021 as the very wide yield premium offered by the onshore China government bonds and quasi-government bonds over the equally-rated (i.e. single-A) comparables in other countries remains very attractive to offshore investors. Despite that, we think the growth of foreign ownership will again play very little or even no role in affecting the overall bond yield performance in 2021, just like this year. 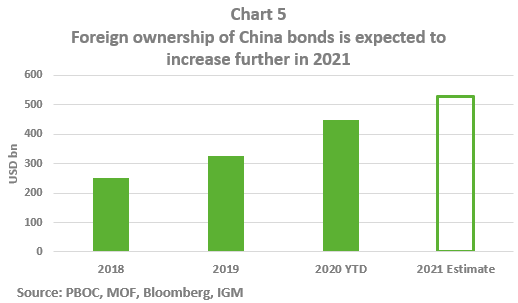 Finally, with growing risk of another round of financial deleveraging, we expect onshore China government bonds will be trading with a bearish bias over most of the next 12 months. In our view, there is good chance 10-year CGB yield, which is currently at 3.30%, will be heading 3.80% or even 3.90% in quarters ahead.