As per the announcement, eighteen banks are selected as LPR quoting members and each of them are required to submit one LPR quote for a 1-year period and one for a 5-year period to the National Interbank Funding Centre (NIFC) on the 20th of each month.

The submitted 1-year and 5-year LPR quotes must be in the form of basis points above 1-year MLF rate. NIFC will take the arithmetic average of the LPR quotes as the LPR fixings (one for 1-year and one for 5-year) after eliminating the highest and lowest quotes.

PBOC requests all commercial banks to use the LPR fixings as yardsticks to price their new lending and as the benchmark rates in floating rate loan contracts going forward. 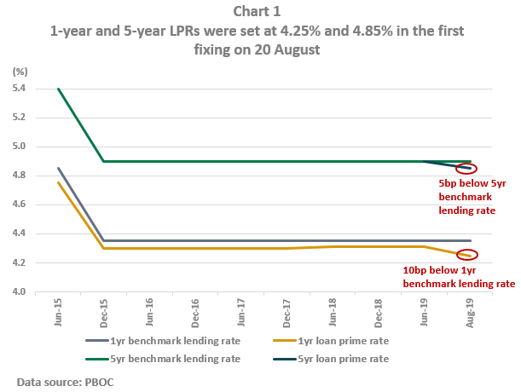 Given the growing risk of further economic slowdown, second LPR fixings will likely come in at lower levels.

In our view, PBOC will be lowering the funding costs by cutting MLF rates (which LPR fixings are based on) and coercing the eighteen LPR quoting banks to compress the premiums expressed as the submitted LPR quotes.

In our 17th July China Insight publication, we had already cited PBOC Governor Yi Gang as saying in late May that his colleagues are now investigating the possibility of not publishing the benchmark lending rate anymore. As such, we think the establishment of the market-based LPR mechanism implies PBOC's bias towards fading out the benchmark deposit/lending rates in the future.

In regard to Chinese onshore government bonds, we are confident that the downtrend of their yields will resume very soon because of two reasons: 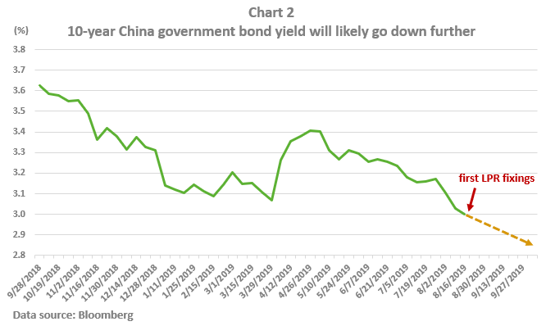