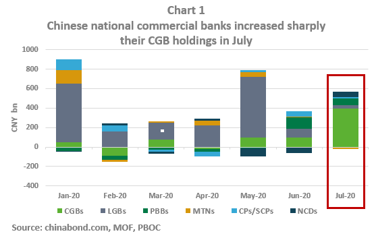 It's worth noting that the category covering government institutions and agencies increased its CGB holdings by as much as CNY196bn in that month (chart 2). Because of the nature of entities included in this category, it is widely speculated that PBOC might have bought the paper behind the scenes via them. 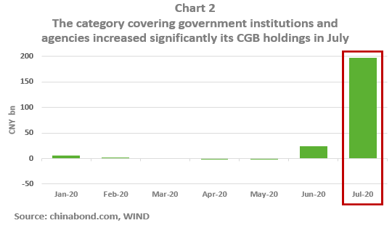 We would not feel surprised if PBOC did really buy the special CGBs in July in order to alleviate the supply pressure and cap the upside of bond yields. As a matter of fact, many investors were not enthusiastic about bidding for the special CGBs in the auctions held last month amid their concerns over a potential exit of the counter-pandemic monetary stimulus.

Overshadowed by concerns that this bunch of special CGBs, which is presumably held by PBOC, will eventually re-enter the market in various ways, market participants should find it difficult to regain appetite for paper at the current yield levels. Recall, CNY66.13bn 2-year CGBs were auctioned off at an average accepted yield of 2.64%, with the book only 2.06 times covered. Such a low coverage ratio suggests bond yields now see growing upside risk. The 10-year yield, which is now at 2.94%, may return to 3.0-3.10% over the rest of this quarter (chart 3). 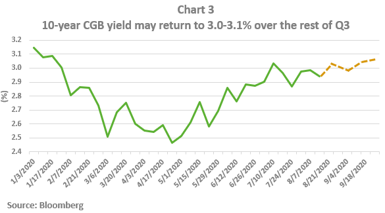