JP Morgan in early-September announced that China Government Bonds (CGBs) will be included in its series of GBI-EM bond indices, starting 28 February 2020. The inclusion will take place over a 10-month period and be completed at the end of November 2020. This is another major bond index's inclusion of China, following Bloomberg Barclays'.

With China's inclusion, Asia's weight is expected to increase to 33.2% by the end of November 2020 at the expense of other EM regions (chart 1). 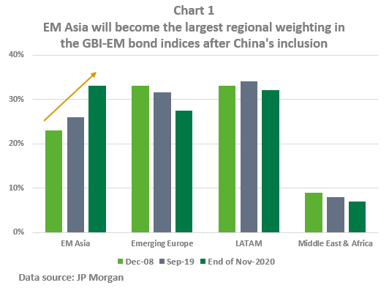 According to the China Central Depository Clearing Co. Ltd. (CCDC), foreign investors own CNY1.18tn of China Government Bonds, representing 8.26% of the outstanding CGBs as of August.

Chart 2 shows that foreigners' share in the purchase of CGBs had increased during most of the time in 2018, in reaction to the inclusion of CGBs and Chinese policy bank bonds to Bloomberg Barclays Global Aggregate Bond Index, which was announced on 23 March last year and started to be phased in over a 20-month period starting in April this year. 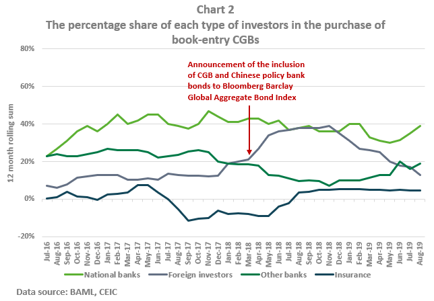 In regard to RMB FX, we don't think its performance will be significantly influenced by the CGB inclusion to the JP Morgan GBI-EM bond indices. Recall, RMB depreciated a lot last year because of the trade war. Likewise, RMB continued to depreciate after the IMF in November 2015 announced the inclusion, effective Oct 2016, of the Chinese yuan to the special drawing rights (SDR) basket.

Ahead of the 70th anniversary of the founding of the PRC on 1 Oct, we will likely see a further rebound of the RMB (possibly to as high as 7.00 against USD) as a result of the exchange of goodwill gestures, in the form of a tariff delay between the US and China. However, we reckon the currency depreciation will resume after China and the US fail again to reach an agreement in the trade talks, which will take place in the first or the second week of October. As a matter of fact, the steepness of the USD/CNH forward curve (chart 3) suggests an extension of RMB depreciation will happen over the next 12 months. 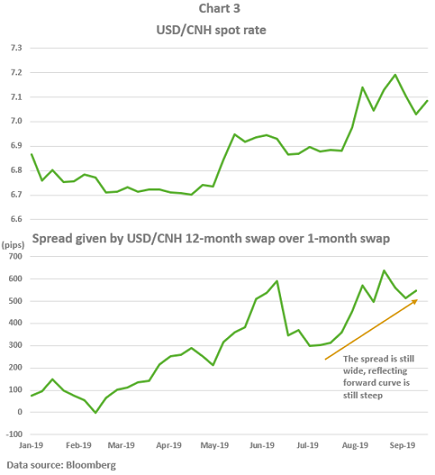