Asian FX focus: Can IDR play catch up in Q4?

22 Sep 2020 by Jonathan Cavenagh
Topics: Industry News |
Provided by IGM FX and Rates |
Get a free demo
Login to IGM

Asian FX focus: Can IDR play catch up in Q4?


In this piece we highlight the underperformance of IDR FX within the USD/Asia bloc in Q3. We outline the likely drivers of this underperformance, with pay back from an exceptional Q2 performance, central bank intervention to accumulate USDs and weaker seasonality (particularly in August and September), as the most likely drivers. Lack of offshore capital inflows into the local bond market was also a contributor. Looking ahead into Q4 we argue that IDR can play catch up with the stronger EM Asia FX trend. Seasonal headwinds should dissipate, the central bank should be more comfortable with appreciation and guard against a break above 15000, whilst there is ample scope for offshore investors to re-allocate to Indonesia, given attractive real yields on offer and dovish Fed backdrop. We recognize that global equity market sentiment is weaker now, but USD/IDR spikes should be used as opportunities to average into a short USD position.

We are drawing to a close on what has been a successful quarter for EM Asia FX. Excluding the HKD, 7 out of 9 currencies have recorded spot gains versus the USD (CNH, MYR, PHP, INR, SGD, KRW, TWD) versus two that have fallen (THB and IDR). The support for FX in the region has predominantly come from the broader weak USD trend, underpinned by the dovish Fed. The Chinese authorities have also been comfortable with CNY outperformance, which is in line with economic fundamentals, as China leads the world out of the COVID recession. A stronger Chinese currency has spilled over to the rest of the region, whilst signs of a global economic recovery have been equally important, particularly for the export orientated economies. Broadly, these positive conditions should persist as we progress into Q4, as the Fed’s outlook reinforced low US rates for an extended period. There are some important caveats around short term market positioning and whether markets are pricing in too much good news around the outlook. Added to this is the uncertainty surrounding the US election outcome. Still, our general sense is that up moves in USD/Asia will be used as a USD selling opportunity by the market.

Notwithstanding what should remain a supportive backdrop for Asian currencies, the underperformance of IDR in Q3 is a clear standout. The first chart ranks EM Asia currencies by spot returns for Q3, with IDR down around 3% against the USD. 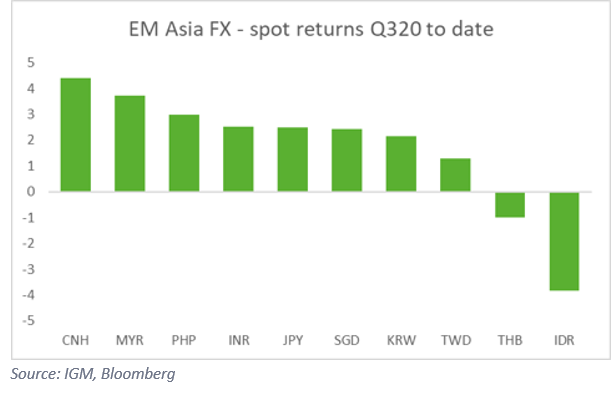 At face value this underperformance is surprising given IDR falls into the high yielding category. As the second chart highlights, Q3 has generally been a good one for high yielders, IDR and RUB being the exception. In a world of very low interest rates and improving risk appetite (albeit not entirely for the whole quarter), one should generally see high yielding currencies doing better. 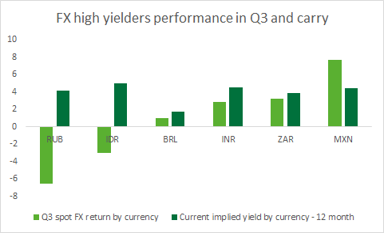 Several headwinds for IDR in Q3…

Of course, the IDR’s underperformance in Q3 needs to be put in context of its outperformance in Q2 where it rose just over 14% against the USD. Hence some degree of mean reversion or coming back to the rest of the pack could be expected. Other factors to note are that August and September are not typically good months for the IDR FX. The chart below plots the average performance of USD/IDR by calendar month using a sample period of the last 10 years. Positive readings indicate those months the USD rises on average against the IDR and vice versa for negative bars. The source of this seasonality is likely to rest with payments to offshore investors from Indonesia during this period, as foreign investors own a good chunk of Indonesian assets (this could be in the form of dividends or coupon payments). The other interesting factor is that the Indonesian central bank has continued to accumulate FX reserves during this period. Spot FX reserves have trended up sharply during this period, as Chart 4 demonstrates. Note that even if we make some valuation adjustment to account for a declining USD over this period (which would boost headline FX reserve numbers), FX reserves have still trended higher. Higher reserve accumulation will be supportive of higher USD/IDR levels, all else equal. It also speaks to Indonesia’s underlying overall Balance of Payments resilience. Arguably fresh reserve accumulation is a prudent strategy by BI given IDR’s outperformance in Q2. This gives the central bank more ammunition to curb IDR volatility/weakness in the future.

Chart 3: IDR seasonality tend to be a headwind in Q3 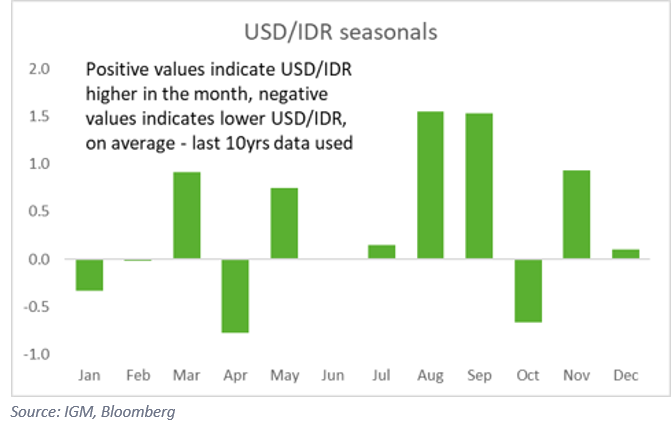 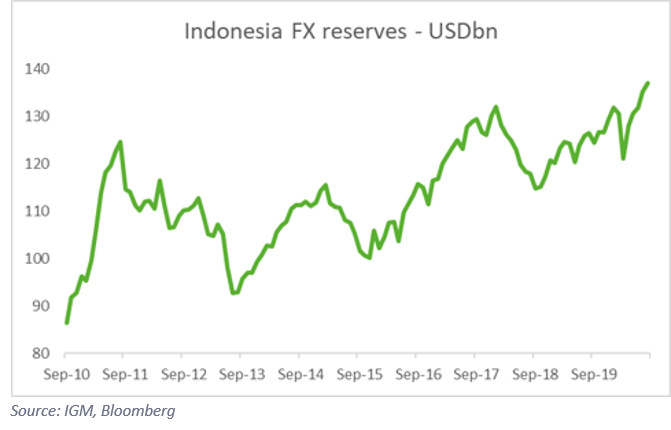 … but Q4 should prove to be more fruitful

If the central bank continues a policy of strong reserve accumulation IDR may continue to be a laggard but after Q3’s underperformance we have seen a meaningful adjustment in terms of IDR’s nominal effective exchange rate (NEER) performance, see chart 5 below. The NEER measures IDR performance against a whole host of currencies including the USD and is based off trade weights. This may leave the central bank more comfortable in letting the IDR play some catch up with the weaker USD trend. Recent comments from the central bank have also suggested a willingness to curb USD/IDR strength. Indonesia’s external position also continues to improve, with the current account deficit narrowing and that trend is likely to continue into Q4. The rolling 3-month average of Indonesia’s trade surplus is at multi year highs and its typically the case that we see IDR at stronger levels during such periods, see chart 6 below. The trade surplus is partly reflective of weak domestic demand in Indonesia, which is curbing import growth and reducing USD demand. Whilst this is reflective of weak domestic demand conditions a trade surplus is supporting the currency. 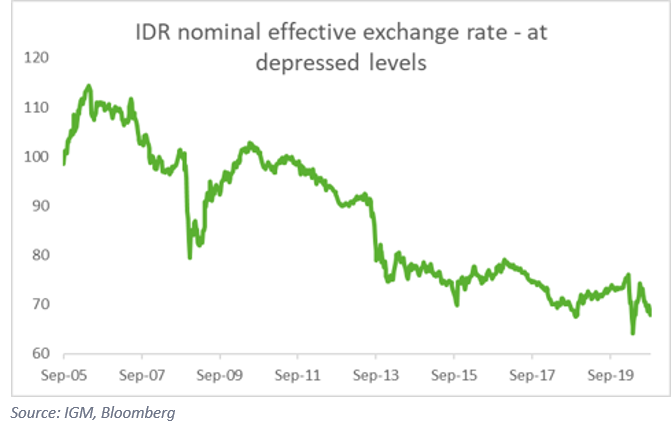 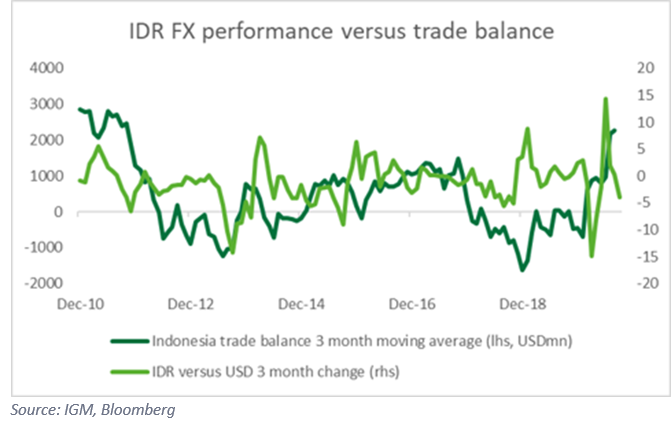 The final missing piece for IDR to play catch up may come from a renewed pick up into Indonesian bonds from offshore investors. Such capital flows have often been a key driver of IDR FX swings in the past. Through Q1 we saw very sharp outflows as the COVID outbreak drove the global economy into recession. Through Q2 we saw some recovery, but foreign ownership of local bonds has flatlined through Q3 and we are still 14% below the January peak from earlier this year. The broader backdrop for bonds should be supportive of inflows. Chart 7 overlays the year-on-year change in foreign ownership levels versus the real yield offered by Indonesia (the nominal 10yr yield less headline inflation). Generally higher real yields coincide with a pick-up in inflows. Likewise, if we compare the yield pick up after proxying for hedging (by taking the 10yr yield and subtracting the 12-month NDF implied yield), see chart 8 below

Lack of foreign participation in the Indonesian bond market of late may have reflected concerns around supply, with Indonesia’s fiscal deficit projected to be beyond 6% of GDP this year. Indonesia is hardly alone in this factor though, with many other economies seeing much weaker fiscal positions this year. The other factors may be concern around central bank independence and BI purchasers of local bonds and how long this will persist for. Recent comments from Indonesia officials has looked to downplay such risks (see BBG article here). To be sure, these factors need to be monitored but we don’t suspect they will drive big outflows from local bonds, particularly given the positive factors outlined above.

Offshore investors seem relatively calm from a sentiment perspective, as the shape of the NDF forward point curve is reasonably flat. A steeper curve would indicate that investors are hedging risks by buying longer dated USD/IDR forwards, which would push forward points higher at this point of the curve. See Chart 9 below. Weaker global equity market sentiment is a cautionary point but its important to note that USD/IDR is already tracking at higher levels relative to global equity market sentiment now (see Chart 10 below).

Overall, we see scope for IDR to play catch up in Q4. 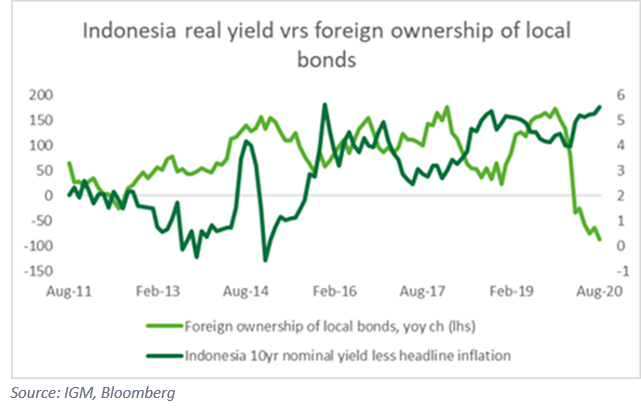 Chart 8: Whilst hedging costs have come down 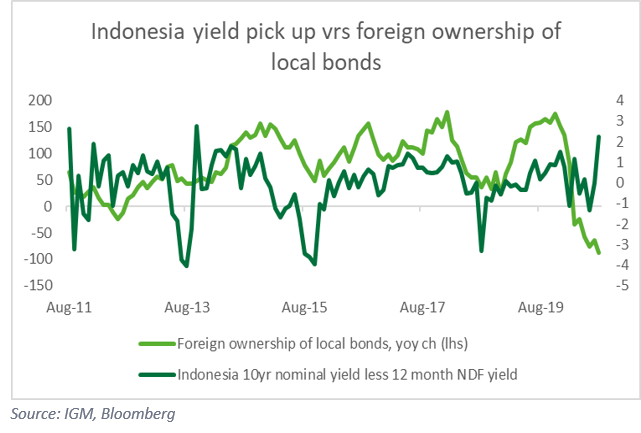 Chart 9: No signs of concern in IDR NDF forward points 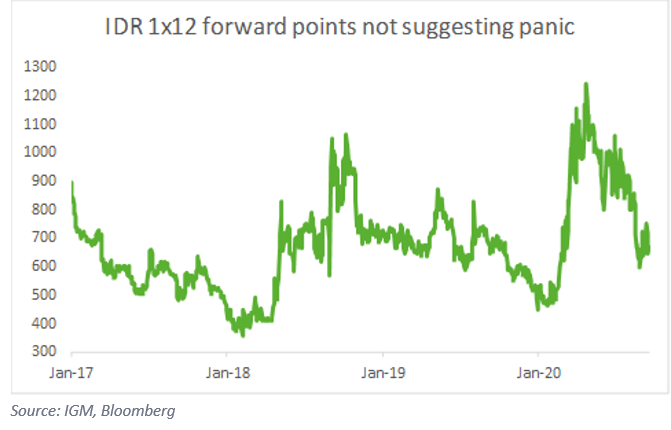 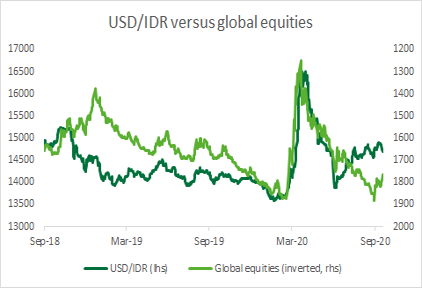