Into year end, we continue to see USD/CNH remain highly sensitive to tariff-related news. As far as US-China trade negotiations, we think the phase-one trade deal will get done in January or February if not by the 15 December tariff deadline. At worst, the Trump administration goes ahead with the new tariffs on 15 December and then make a complete rollback once a deal gets done. We don't think a failure to get the phase-one trade deal done by 15 Dec will result in a shutdown of negotiations as both Xi and Trump do not want an escalation of US-China tensions.

Our baseline scenario assumes the two sides will agree on a phase-one deal in January or February 2020 if not in December this year with partial or complete rollback of September tariffs, while China will significantly increase US agricultural imports. The rollback in tariffs could be made contingent on China meeting its commitments in the deal. It would likely also include an implicit understanding that China would confine USD/CNY to a tariff-adjusted range. A comprehensive agreement on the more contentious issues of intellectual property rights, technology transfers, and China's industrial policy will likely have to await the second phase of the deal. In our view, the phase-two deal is far more challenging to China than phase-one, so we won't be surprised if it fails to emerge before or even after the US Presidential election in November 2020. We don't expect Washington will agree to roll back the tariffs imposed prior to September unless the phase-two trade deal is worked out.

Assuming a phase-one deal is reached sometime over mid-Dec to late-Feb, we expect USD/CNH will likely re-see 6.90 in Q1 amid a stabilisation or even a moderate rebound of GDP growth. Subsequently, the pair will be heading for 7.20 again in H2 (chart 1). We attribute a re-emergence of RMB depreciation pressure in H2 to Beijing's reluctance to reach a very tough phase-two deal with Washington as the US Presidential election approaches and a deterioration of China's growth momentum as we progress into 2H20 (chart 2). From the Chinese leader's perspective, it makes sense to avoid any much tougher deal with the US before the US Presidential election. However, with much stricter capital controls coming into effect in 2020, we don't think runaway RMB depreciation, like we saw in 2016, will re-surface even if China's growth outlook turns gloomy again (chart 3). At worst, any breach of 7.20 will be only temporary and marginal. 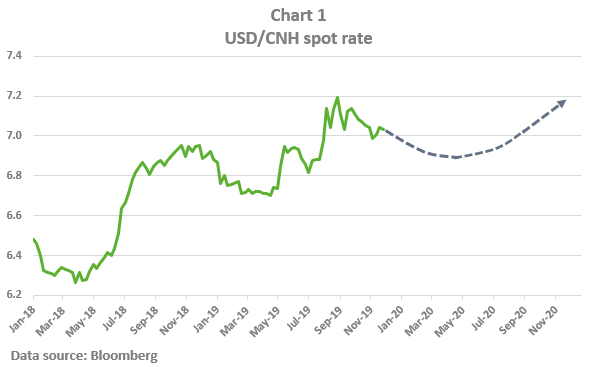 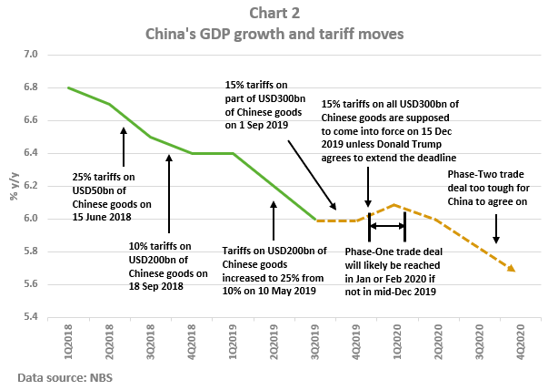 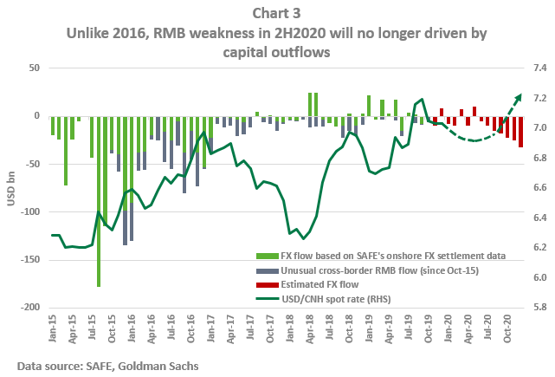