Viewpoint: All eyes on the South African budget amid lingering downgrade risk

SOUTH AFRICA's 2019 Budget (February 20th) will be closely scrutinised given the lingering growth and fiscal challenges facing the country and the potential for Moody's to finally follow in the footsteps of S&P and Fitch back in 2017 with a downgrade to the country's long-term foreign currency credit rating to junk. All three rating agencies are expected to provide updates around March.

The sovereign started this year with a stable outlook from Moody's, which cited the implementation of a transparent policy framework that it believed will gradually strengthen institutions. The economy was also expected to recover slowly but remain below levels seen in the first half of the decade, hampered by the rigidities in the labour market and insufficient and unstable power supply, and with no visibility on the outcome of land reform a dampener on investor sentiment. Moody's projected GDP to reach 1.3% in 2019 from an estimated 0.5% in 2018.

Moody's has in recent years been the most generous of the big three agencies in the face of the weakening standard of governance under former President Zuma and the continued deterioration of public finances and growth prospects that prompted the series of rating cuts from S&P and Fitch almost two years ago. As things stand Moody's holds South Africa at Baa3, the lowest investment grade; one notch above Fitch and two notches above S&P. 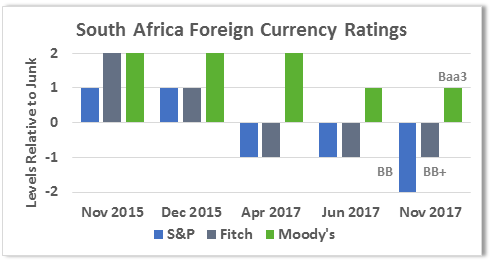 What can be expected from the budget?

It would appear the consensus is that not much will differ from the Mid-Term Budget Statement (MTBS) back in late October, which recall, laid out a gloomy picture of the national finances (sky high debt and disappointing tax collections) against the backdrop of a technical recession and high unemployment. What really worried the markets and appeared to lift rating cut risk was the fact government debt was expected to stabilise later than expected and at a higher level, at almost 60%/GDP in 2024 vs 52%/GDP in 2022 previously forecast (see dashboard below).

In our opinion, GDP forecasts may well have to be trimmed further from the 1.7%/2.1% for 2019/2020 respectively, as the slow reform agenda is constraining growth. Little new is expected in terms of policy and with Mboweni unlikely to announce any major changes to corporate, personal income tax or VAT in an election year; instead placing emphasis on increasing the efficiency of tax collections. 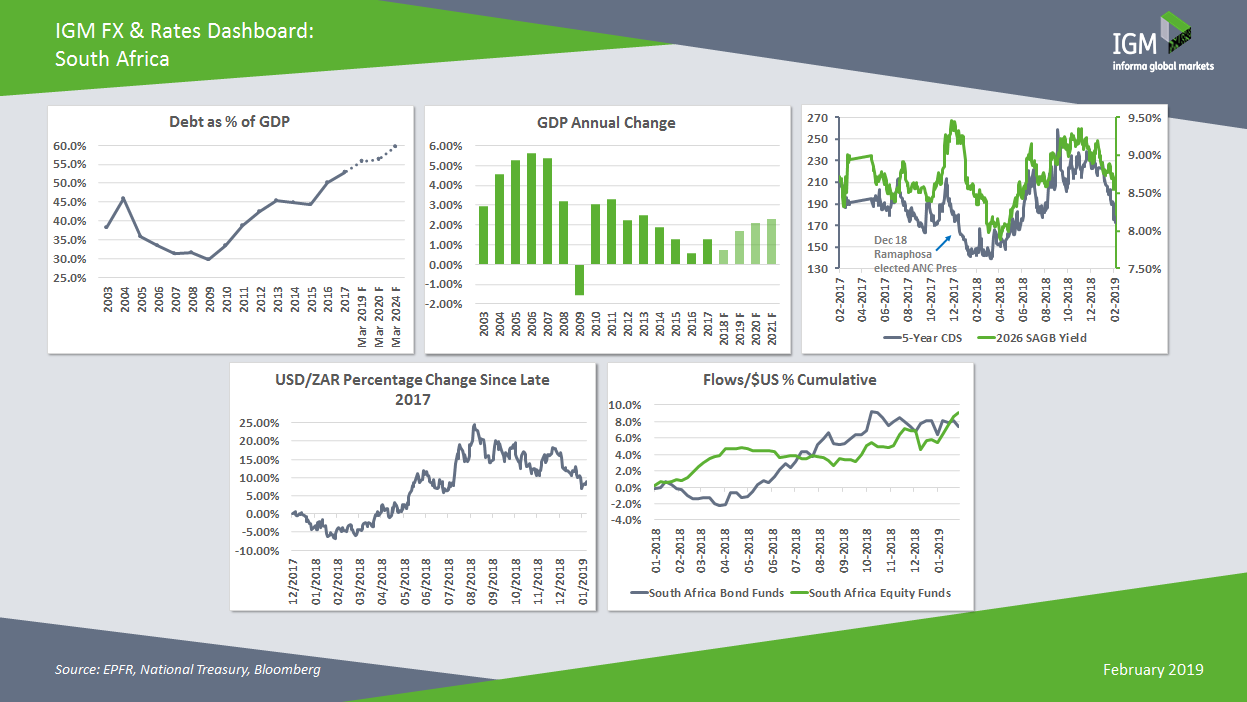 Moody's may well hold fire ahead of national elections

With little change expected from the budget, it is possible it will lead to a rating downgrade from Moody's in March, though this is not our base scenario given the looming national elections in May. It is, albeit, likely Moody's will downgrade the outlook to negative whilst it awaits evidence to support its expectation of a slow recovery in growth and remains on alert with regards to troubled Eskom. The state-owned power utility is one of the immediate fiscal challenges facing the government, though there seems to be scope for a restructuring plan to be agreed.

President Ramaphosa can point to some successes in the fourteen months he has been in power � he has replaced the boards and top managers of state companies that have been engulfed in corruption allegations and convinced several local and international companies to back his drive to secure USD100bn in new investment. Yet, he remains hindered to a large extent by the ANC, for which his political control is tenuous.

Whilst Ramaphosa's ascent to power initially boosted confidence, sentiment has since weakened (albeit currently off worst levels) and presumably as reforms have fallen short of expectations. USD/ZAR is still almost 10% firmer than where it was trading in late 2017 and the 5-year CDS is wider by around 20bp at 176bp (though it did top 250bp late last year). Additionally, the 2026 SAGB yield has now pared all the losses made in the few months that followed Ramaphosa's election victory � see the above dashboard.

It remains to be seen if the ANC party can secure a healthy majority in the upcoming elections. If it did, this could perhaps give Ramaphosa a mandate to further pursue some measure of economic reform, otherwise Moody's may well be forced to act later this year, and this will trigger capital outflows from passive investments. As the above dashboard shows, net cumulative inflows into South African focused bond funds since the end of 2017 have already started to plateau after peaking at an increase of more than 9% in October last year, in contrast to equity fund flows, which remain on an upward trajectory.

Whether Moody's will continue giving South Africa the benefit of the doubt is the biggest uncertainty for South African markets this year. Still, so far, with sentiment boosted by the more dovish Fed and subsequent repricing of US rate hike expectations, players have seemingly felt comfortable enough to overlook South African risks in the short-term. So much so in fact, the Rand has led the near-broad EM advance against the Dollar YTD, to leave USD/ZAR softer to the tune of more than 6%; at levels below 13.500 for the first time since August.

The 2019 Budget may well prove a near-term weight on the Rand and on this, the charts suggest there is scope for a USD/ZAR rebound to 13.542/13.747 before fresh easing resumes. We still believe there is room for USD/ZAR to further unwind 2018's ca. 14% advance if the external risk backdrop remains supportive. We are therefore, staying focused on 13.081 (31 July 2018 low, near 61.8% retrace of 11.508/15.696 rally) in due course. Further out though, we are likely to see an unwinding of Rand strength in H2 should it become increasingly apparent the sovereign will not escape a downgrade this year.