In the Emerging Markets sphere it is difficult still to divert attentions beyond Turkey, given the intensifying risks to the country's macroeconomic stability from a weakening Lira and rising inflation - a cycle that will prove increasingly difficult to break free from without aggressive central bank action. 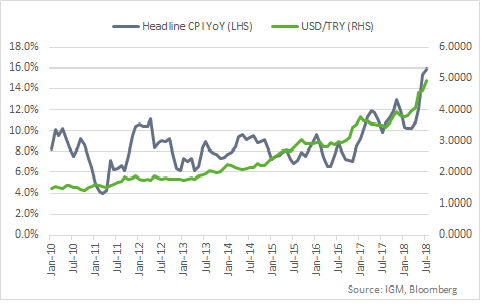 CBRT Adds Fuel To Fire By Showing A Weak Hand

The CBRT's decision this week to change its reserve rules to boost banks' foreign exchange liquidity by USD2.2bn was deemed a very disappointing reaction to the currency's free-fall, as demonstrated by Monday's circa 5% slide in the Lira vs the USD � the largest one-day slump in at least five years (albeit exacerbated by thin liquidity). The reserve rule tweak only added to investor concerns the central bank is reluctant to act decisively. These concerns have been the driving force behind the currency's recent crisis episode, but this has, of course, been exacerbated by the deteriorating US-Turkey relations that has culminated in sanctions on two Turkish ministers.

We maintain that if there is to be any hope of quelling the pressure in the markets, there must be an aggressive rate hike and soon, and with rates to stay high so long as inflation remains elevated. This must also be accompanied by tighter fiscal policies to reduce the current account deficit that is running at a four year wide of more than 6%. Yet, unfortunately President Erdogan and his loyal politicians are only intent on pursuing a pro-growth strategy with the belief that accelerated growth will keep money flowing in to Turkey.

So, whilst the central bank sits tight, talk has inevitably turned to extreme but not inconceivable scenarios of IMF bailouts and capital controls, due to Turkey's growing external indebtedness, fuelled by President Erdogan's recent fiscal expansions and incentives to make borrowing easier. There is an acute awareness the Turkish government does not have a sizeable fiscal or foreign exchange cushion � gross foreign exchange reserves are sub-USD 80bn, at lows since 2011 � to help banks and corporates access foreign currencies if Turkey is cut off from international capital markets, which could result from tougher US sanctions or a deepening of the current currency crisis.

With the Lira sliding, the costs of servicing the country's rising debts are building up. The sovereign local currency 10-year bond yield has exceeded 19% and yields on shorter maturities are in excess of 20%. Meanwhile, the average yield on Turkey's USD debt exceeds 8.00% for the first time since 2009 and is more than 200bp higher than the EM equivalent.

Yields on USD denominated debt from the country's biggest banks are all on the rise as well. Garanti's 2027 bond yield, for example, has topped 11% for new record highs, but there are even greater yields out there among Turkey's five other largest lenders. The yield on Halkbank's 2020 line stands out, at more than 23%, though with this upwards pressure exacerbated by the prospect of US penalties for being at the centre of the conspiracy to violate United States sanctions on Iran.

The below dashboard brings together some key metrics that demonstrate just how vulnerable the Turkish economy and banking sector is to the unfolding scenario. 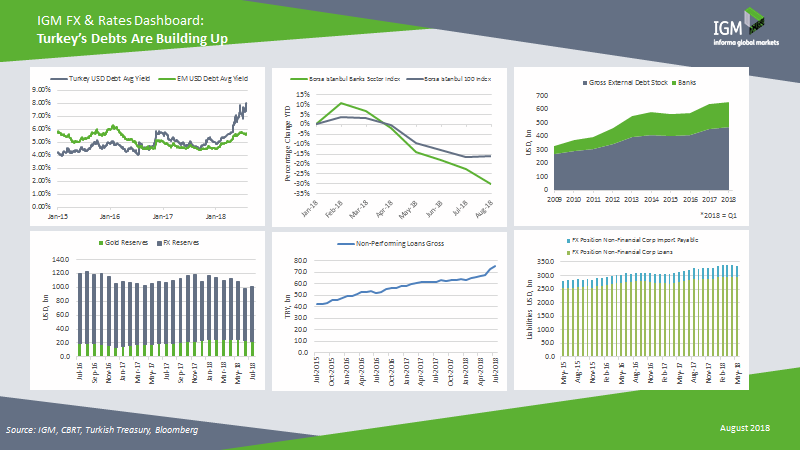 Turkey's Borsa Istanbul Banks Sector Index has already lost more than a third of its value this year, almost double that of the Borsa Istanbul 100 Index, amid several debt restructuring requests from companies that are sitting on USD337bn in debt and with USD100bn in repayments coming due over the course of the year.

What's more, as the dashboard shows, non-performing loans are surging when valued in Lira as Turkey's weak currency and the 500bp of rate hikes already this year take their toll (though Lira would be weaker if the CBRT did not tighten monetary policy), reaching a record high of more than USD75bn in the last week of July (or USD15.6bn in Dollar terms). Lira-denominated loans account for an overwhelming majority of this figure.

Banks have proposed rules to speed up the restructuring of company debt to allow lenders to avoid booking problematic credit as NPLs with the aim to prevent defaults from accelerating. Yet, this is perhaps already too late, as last month Fitch downgraded the Long Term Foreign Currency Issuer Default Ratings of 24 Turkish banks and their subsidiaries; the majority by two notches, following on from a lowering of the sovereign rating deeper into junk.

One big US investment bank warned this week that a fresh Lira drop could wipe out Turkish banks' capital buffers and we also recall a New York investment firm last month betting on Turkish contagion to European lenders that have large exposures to Turkey.

What About Contagion To The Broader Emerging Markets Sphere?

A handful of economists and fund managers have warned in recent months about a meltdown across EMs in the wake of the Lira's slide, currently in the region of 28% vs the USD. Additionally, back in May the IIF released a report about the risk of contagion to EMs from the sizeable sell-offs in both the Lira and Argentine Peso this year � the ARS is the only currency that has fared worse than the Lira. It noted at the time that whilst the spill over was so far limited, there was a concern the currency slides came with an increase of just circa 60bp in the US 10-year Treasury yield and this raised the question about how well the EM complex will digest a continued move higher in global funding costs.

UST yields have since consolidated gains, but a deteriorating Turkish narrative has, of course, been weighing further on Turkish assets, and focusing specifically on the continued Lira sell-off, there is no suggestion this is yet feeding through to its EM counterparts. In fact, the 60-day correlation between the Lira and the MSCI Emerging Markets FX Index (MXEF0CX0) has turned negative for the first time since the beginning of 2000, as highlighted. 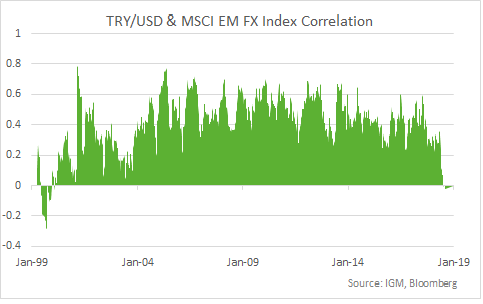 It's also worth bearing in mind the last time the Lira was so heavily sold off on an intraday basis, back on 15 July 2016, the day of the Turkish military coup attempt (circa 4.8% vs the USD), there was little impact on the MSCI Emerging Markets FX Index, which saw a modest 0.1% decline vs an advance of 0.6% the prior day. The index continued to post modest losses for a few sessions, but it had essentially been on an upward trajectory since the start of the year and went on to post 10-month highs in August, then eventually on to record highs in the first four months of this year.

In terms of fund flows, there was an immediate negative impact from the coup inspired Lira sell-off on both net inflows to Turkey bond and equity funds, and as well as EM equity funds � the latter of which, albeit, managed a partial recovery into the end of the month after a brief negative spell. Turkey net bond fund flows also went on to reach highs since early Q2 2014 later in the month and have not seen such levels since. That said, back then the Turkish narrative did not warrant concerns of a potential Turkish banking crisis, IMF bailouts or capital controls as it does now. 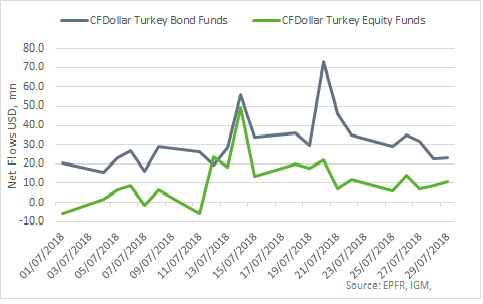 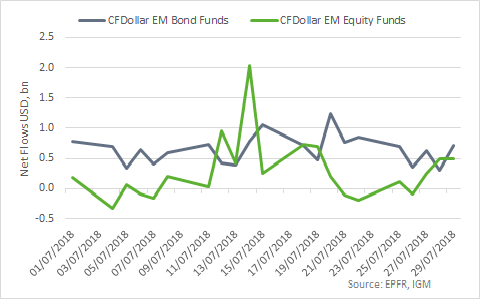