PBOC announced on 3 April plans to lower (chart 1) the reserve requirement ratio (RRR) for small banks (mostly rural banks and small-sized city commercial banks) by 100bp. It will be implemented in two rounds (50bp each) with the ﬁrst round coming into effect on 15 April and the second on 15 May. After the cut, the RRR at these small institutions will fall to 6.0% (versus around 11% for big banks and 9-10.5% for medium-size banks). This RRR reduction will release a total of CNY400bn liquidity, and lower those banks' annual funding costs by about CNY6bn. In addition, PBOC also announced a reduction in the interest rate on excess reserves (IOER) from 0.72% to 0.35%. That is the first excess reserve rate cut since 2008, aiming to encourage banks to reduce their excess reserves at the PBOC and expand bank lending. Note that banks' excess reserve ratio stood at 2.4% at end-2019.

IOER is supposed to act as a floor to the interbank money rates. A reduction of it does create room for interbank funding costs to go lower. After the reduction of IOER to 0.35% was announced, the whole CGB yield curve shifted downward with a steepening bias (chart 2). This development was totally in line with market expectations. After all, merely for earning carry, short-term debt papers are already good enough for financial institutions as long as their yields are higher than interbank funding costs. In our view, yield curve steepening will continue possibly till CGB 2-year vs. 10-year spread, which is currently at 90bp, hits 100-110bp at least. 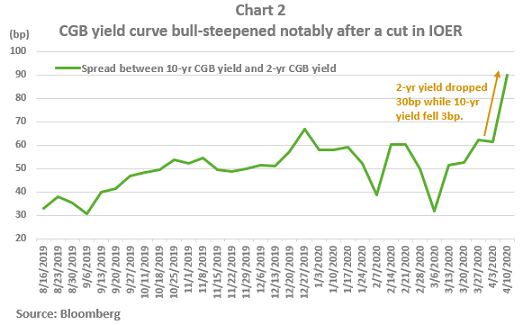 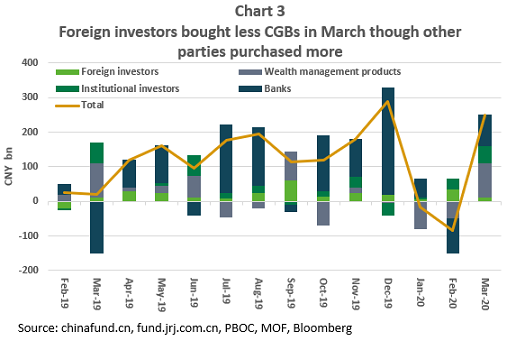