Will This Bond Rally Last?

A mere month ago, the benchmark 10-year Treasury note seemed to be on a clear path to a 3% yield. Global economic growth was improving, oil prices were stabilizing, and Federal Reserve officials were not only talking about more interest-rate hikes, but also clearly planning to start shrinking their massive balance sheet, as well.

Most of that hasn’t changed, yet bond yields—which move inversely to prices—have done almost nothing but fall since then. At the close on Friday, the 10-year yield stood at 2.06% after dipping to 2.02%, the low of the year, early that morning. Investors have benefited: So far this year, the iShares 20+ Year Treasury Bond exchange-traded fund (ticker: TLT), for example, has delivered a total return of 10%.

There are numerous reasons for the rally in safe-harbor bonds. To start with the most obvious, escalating tensions with North Korea triggered new demand. The rogue nation may soon launch another missile, some strategists say. Then there are this season’s devastating hurricanes. Harvey and now Irma will weaken economic growth near term: Last Thursday brought a surge in unemployment claims due to Harvey. Irma is set to unleash her wrath on Florida after ravaging the Caribbean. And two more hurricanes have already formed in the Atlantic.

Inflation, meanwhile, continues to fall. Wage growth remains weak, and the Fed’s favorite inflation measure fell to 1.4% in July, far from its 2% target. In the past week, a parade of increasingly dovish Fed officials have indicated concern with the Fed continuing to hike interest rates when inflation is this low.

Investors are pricing in lower odds that the Fed will hike rates this year. December odds have fallen from 36% a week ago to 25% on Friday (and were as low as 20% on Thursday). This was partly because Congress and President Donald Trump have agreed to suspend the debt ceiling for three months until just before the Fed’s mid-December meeting, making a hike then less likely.

GLOBAL MONETARY POLICY is a key factor in U.S. bond yields. Last Thursday, the European Central Bank said it will wait until October to even discuss potential plans to taper its bond-buying program—and restated that it could extend or increase the program instead of tapering. Discussing the many reasons for fallen rates, David Ader, chief
macro strategist at Informa Financial Intelligence, says, “We can add a sense of central-bank patience over accommodation to all that.”

Krishna Memani, chief investment officer of OppenheimerFunds, says the rally in Treasuries is getting overdone. He doesn’t think the Fed will hike rates again this year, but believes the probability of tax reform passing has improved now that Washington has cooperated on the debt ceiling. “If you assign any probability to tax reform happening, this a good selling opportunity for Treasuries,” he says, “rather than a buying opportunity.”

Bill Merz, director of fixed income at U.S. Bancorp Wealth Management, will be watching this week’s inflation figures closely. He doesn’t expect the consumer-price index to jump, but any upside surprise would be bearish. He recommends that investors own some high-quality bonds for diversification benefits, but favor shorter-term maturities that are less interest-rate sensitive. As he sees it, with the 10-year note yielding just 2%, the risk of rates rising from here is greater than the potential reward.

Rate strategists Ian Lyngen and Aaron Kohli of BMO Capital Markets say it would take another adverse news event to push the benchmark yield below 2%. That doesn’t mean it won’t happen, they wrote on Friday, but it would trigger a wave of bond selling that would make the dip “relatively short.” 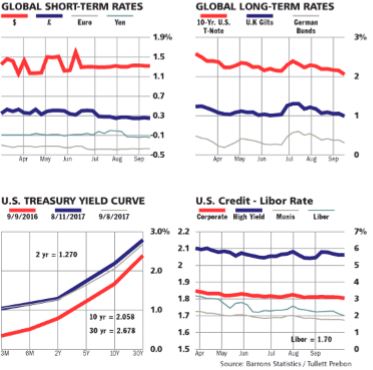