China's activity growth data for February were much weaker than expected, suggesting there is a very good chance the Q1 GDP y/y will fall into negative territory.

To avoid the economy worsening further in the aftermath of the COVID-19 outbreak, Beijing inevitably has to ramp up fiscal spending substantially over the rest of the year.

Given the postponement of the National People’s Congress (NPC) meeting which was initially scheduled for early March, we so far have no official data on how much the government will spend in 2020. However, with the onshore CNY IRS curve steepening sharply recently (chart 1), we doubt the potential increase in government expenditure will be small. Meanwhile, we reckon most (if not all) of the extra spending will be financed by the issuance of special bonds, in particular, the long-term ones. As per chart 2, special bond issuance increased substantially in Jan and Feb, which may be setting a trend for most of the year. 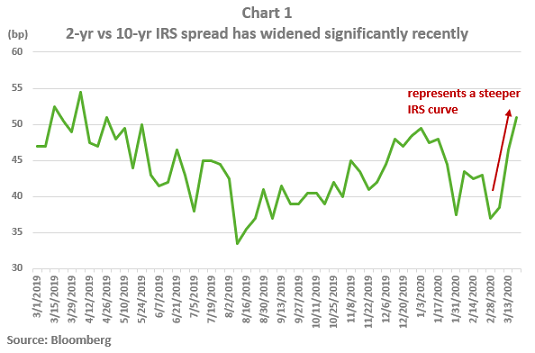 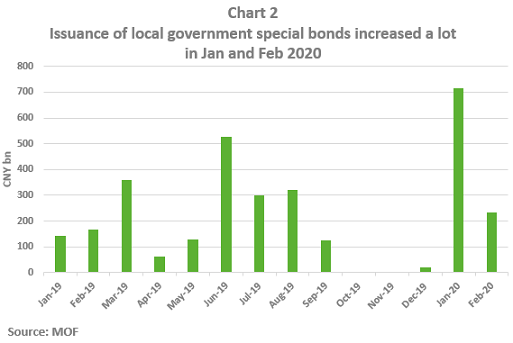 Recall, the batch of special MOF bonds (8 issues) issued in 2007 was in size for as much as CNY1540bn. The 8 issues involved were evenly split across 10-year and 15-year maturities. Afterwards, the MOF issued another batch of special MOF bonds (3 issues) in 2017 to raise some CNY636bn. The maturities of those 3 bond issues ranged from 5 to 7 years. This track record reflects Beijing's strong bias in favour of financing special needs by issuance of long-term bonds.

With central government and local governments continuing to be highly-geared (chart 3), we are afraid that a substantial increase in fiscal spending financed by issuance of long-term bonds will stir up speculation over a sustained rise in long-term financing costs. 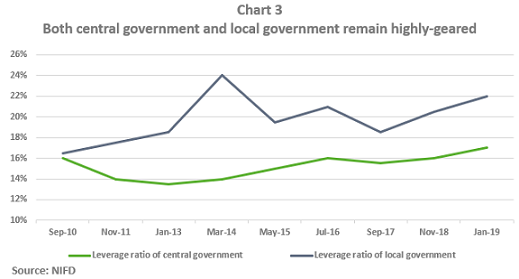