China Insight: We Are Just in Short-Lived Peace

Ahead of high-level trade talks scheduled for the second week of October in Washington, there is the growing expectation that an interim or mini deal between the US and China will be reached there.

In our view, the exchange of a gesture of goodwill in the form of a tariff delay and the agricultural product order just showed China and the US would like to create a peaceful atmosphere before the trade talks take place. That, however, does not necessarily mean they have already come closer to a deal than before. For example, from the perspective of President Xi, a full removal of additional tariffs may be still a prerequisite for a trade deal.

Then what about Donald Trump? We don't think he is either interested in an interim deal or willing to give up too much (especially removing most/all of the tariffs or relaxing the enforcement mechanism) in exchange for a deal. Take a look at chart 1, we note that trade policy still weighs on the President's Job Approval Ratings (JAR), but already not by as much as in the earlier stage of the trade war. 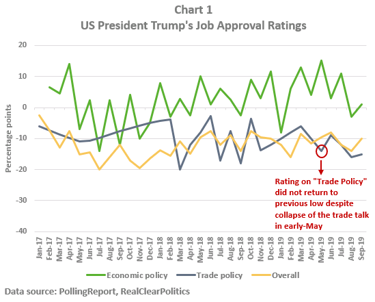 Meanwhile, in the latest Harvard CAPS/Harris Poll survey, 67% of the registered voters said it is necessary to confront China over its unfair trade practices even at some costs.

Given the above mentioned, there is a good chance Trump will maintain his tough stance on China and in turn China will keep avoiding a deal with the US till the 2020 election. 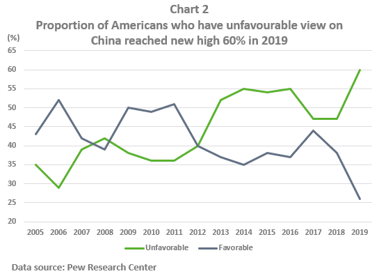 In regards to RMB FX, because both the US and China have intentionally kept the atmosphere friendly and peaceful before the trade talks in mid-Oct, we won't be surprised by another USD/CNH's downside attempt of 7.0500 or lower in the near term. However, in the longer run, we suspect that further depreciation is avoidable. 7.20, in our view, is somewhere reachable in November or December due to the failure of negotiations in mid-October to yield meaningful progress towards an end of confrontation (chart 3). 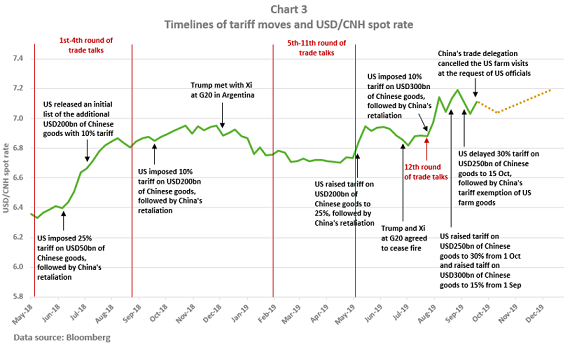