22 Sep 2020 by Christopher Shiells
Topics: Industry News |
Provided by IGM FX and Rates |
Get a free demo
Login to IGM
Mexican Peso has been best EM currency performer vs USD in Q3

Since the start of Q3 the Mexican Peso has been the best EM currency performer vs the USD, rising over 7.0% (vs a 10% slide in the value of the TRY and just 0.6% gain vs the BRL) after a precipitous 18% sell-off in the first half of 2020. This has pushed USD/MXN below its 200 day moving average and below the 21 handle for lows since March. 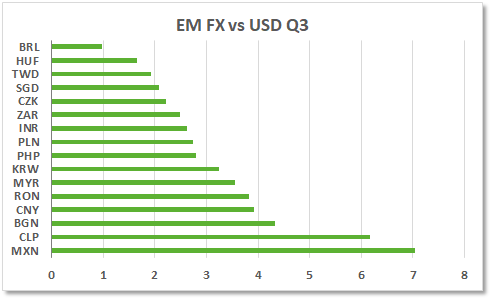 Carry has been king

The key driver has been the MXN's carry gains (Bloomberg shows the MXN has offered the best carry returns in the period), amid the broad USD sell-off. The Banxico's relative hawkish stance has supported this, as whilst it has cut rates, accelerating inflation has slowed the path vs its peers (see dashboard for chart of cumulative rate cuts this year) and Mexico's 4.5% benchmark holds plenty of appeal to carry investors, as it still offers a positive real rate of return (again see dashboard for a comparison of EM real rates).

The MXN has also been supported by some decent economic data out of the country over the past two months, with economic activity and retail sales all rebounding sharply (see dashboard). On top of that Mexico also stands to benefit from the manufacturing recovery globally and the sharp rebound in the US auto sector in particular.

Bulls see the MXN as remaining attractive on a carry and fundamental basis, with a return to 20/USD by year-end.

However, the MXN may well have had its best run and as an EM sentiment bellweather, it may start to underperform on declining US data and renewed Covid-19 cases in Europe.

Mexico's post-pandemic macro outlook is also worrying. The economy is likely to face one of the deepest slumps in LatAm this year (Banxico predicts best case of -8.8% after a huge 17.1% contraction in Q2, see dashboard), but the country has opted for modest countercyclical initiatives (IMF puts extra pandemic spending at just 0.7%/GDP vs 6.5%/GDP for Brazil), exacerbating the risk of greater permanent damage to the economy and a delayed recovery. 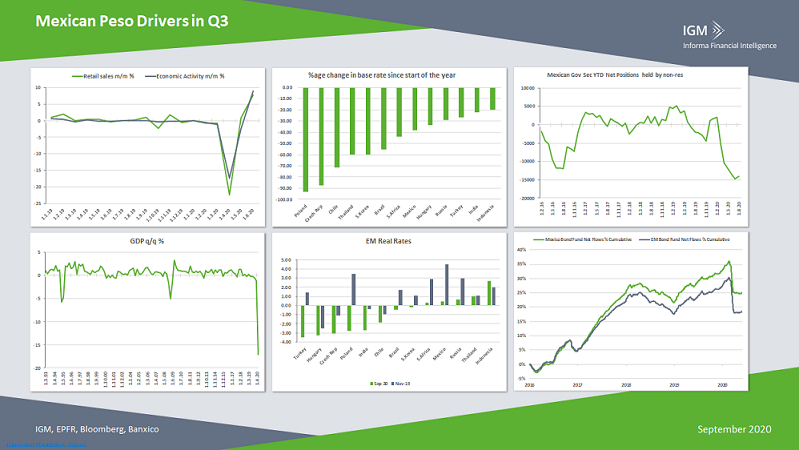 In the face of the pandemic, the Mexican government is one of the few to have offered just small stimulus and its 2021 budget remains austerity driven. Mexico's fiscal austerity shows the government is prioritising the stability of public finances, but there is still a risk that it could lose one of its IG credit ratings.

Indeed, the weak response to the Covid-19 pandemic has also been identified as credit risk, as it will lead to low growth and a drop in budget revenues. The Mexican government's crowding out of investors in the energy sector is also a factor undermining the credit rating, as well as international investor sentiment. However, the main credit risk is Pemex. Fitch has said that budget assumptions for Pemex are optimistic and there is a risk the government will have to continue supporting the oil producer.

All three ratings agencies have already downgraded Mexico this year and it is now just on the cusp of losing its IG ratings. Mexico's big presence in major investment grade bond indices would exacerbate the scale of forced selling if it becomes junk-rated. JP Morgan has estimated USD44.3bn of Mexican bonds are at risk of forced selling in the event of a cut to junk.

There is already evidence that foreign investors are heading for the exits. Foreign holdings of government securities has plunged to 23% as of September 9, according to the central bank's own data, the lowest in over eight years, with the ytd reduction in net government securities holdings by non-residents the steepest on record (surpassing the 2016 sell-off). The EPFR country flows data shows that like most EM countries, Mexican bonds saw a sharp sell off this year and whilst this has stabilised in recent weeks, there has yet to be a material pick-up.

Given the magnitude of the potential impact of a credit rating downgrade, we see greater upside risk in USD/MXN after the recent rally. The most recent price action shows that the MXN remains volatile/sensitive to broader global sentiment, and we believe USD/MXN will struggle to sustain breaks below the 21 handle, with strong support at the 20.000 given the rising geo-political risks in the world and the looming US election, which may see risk taken off the table across the board in the lead-up.

The technical picture suggests that as long as the upside is capped at 21.943, the pair can push on to test the 20 handle, but in the event of sharp increase in risk premium, the pair could easily revisit 22.910. 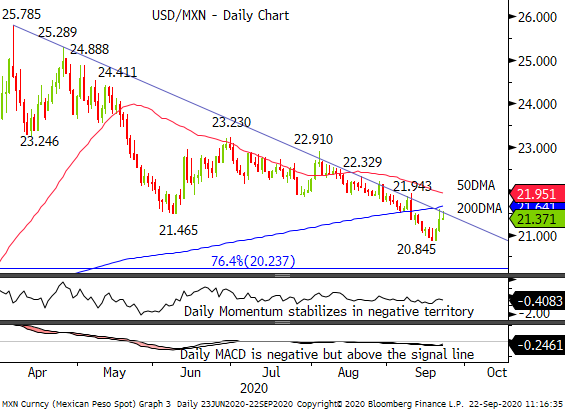