EM FX Viewpoint: Russian Rouble to remain vulnerable in run up to the US election

The 2020 US election entering its final stages

The race for the White House is entering its final stage as the presidential debates have begun and election day draws near. Incumbent President, Donald Trump, hopes to secure another four years in power for the Republicans, whilst his opposition, Joe Biden, looks to secure a win for the Democrats. With weeks to go before election day on November 3rd, Biden is currently polling ahead in key battleground states with some national polls placing him at a significant advantage with a six-point national polling lead. Recent global trending issues/events such as the Black Lives Matter movement and Trump's coronavirus infection has changed the issues debated, the mode of fighting and potentially the outcome. However, as the polls show, Biden has been increasing his lead (see dashboard below) so it now stands at over 8pts according to the FiveThirtyEight October poll.

Why this election matters more for Russian investors than most

This US election is seen as the key risk event for global markets heading into year-end, with the prospect of a Biden/Democrat victory largely considered the EM friendly result, although there are fears over a messy handover of power (will Trump go without a fight?). However, there is one country in particular that stands to lose from a Biden victory and that is Russia. Since events in Ukraine six years ago, the US and EU have continually applied sanctions to Russia. The latest tensions, including the poisoning of Alexei Navalny, election meddling and protests in Belarus, have seen increases in discussions of further sanctions on Russia and it is expected that a Democrat led Whitehouse will have a greater propensity to levy these sanctions on Russia than President Trump. Russian markets are therefore, once again experiencing multiple sanction threats and we have already begun to see these manifest in increased Russian risk premiums.

Over the last 3-months the Russian Rouble is the second worst performing EM currency vs the USD after the Lira, whilst Russia's 5yr CDS spread widening has outstripped its peers since the end of May. The RUB's 3-month implied volatility is below some of its higher yielding EM currency peers, but it remains well elevated (see below). 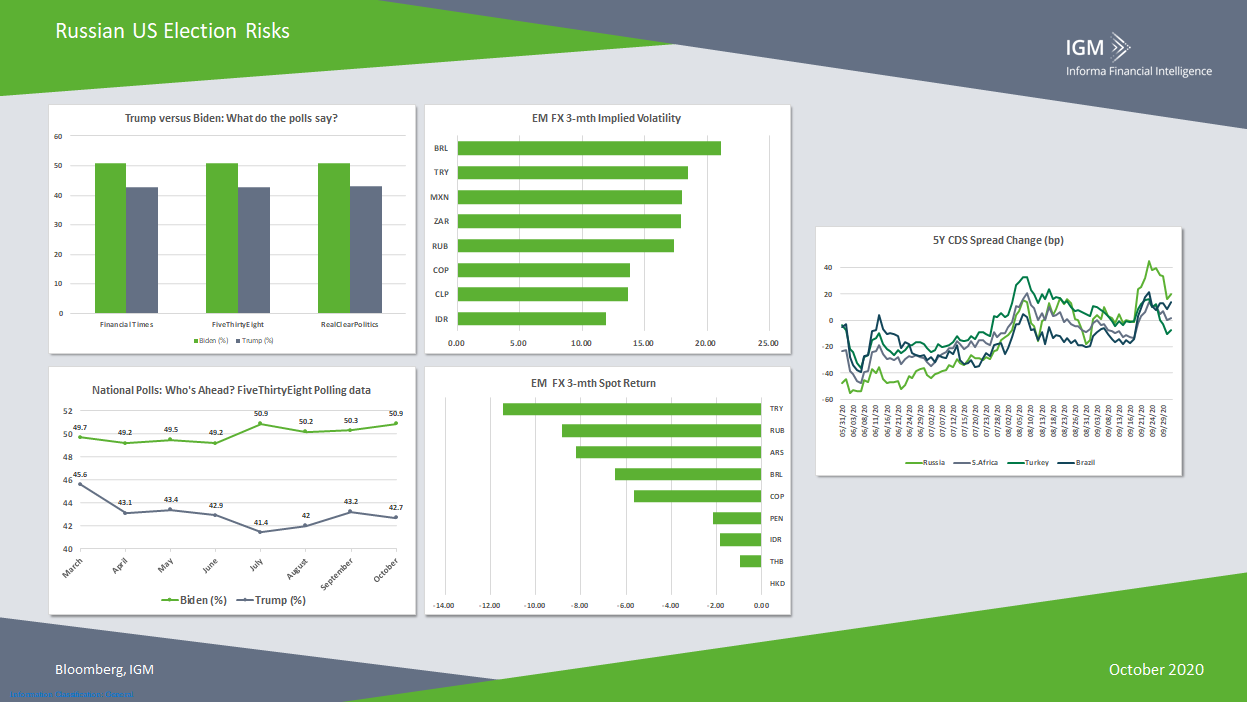 Since Trump's first day in office, Russia has loomed over his presidency. Persistent accusations place Trump as 'Putin's man in the White House'. From denying Russia's meddling in the 2016 US elections to congratulating President Vladimir Putin on his re-election (against his own aides' advice), Trump has repeatedly demonstrated close ties with Putin. Although Trump appears reluctant to criticise Putin, his administration has not been so lenient, repeatedly hitting Russia with sanctions over issues such as election interference and their aggression in Ukraine.

The Trump-Russia affair has mired the president's administration in conflict and controversy. This has been largely led by the alleged collusion between Trump's 2016 presidential campaign team and Moscow. Despite the US intelligence community's unanimous conclusion that Russia interfered with the campaign, Trump appeared to accept Putin's denial.

Whilst Trump remains on friendly terms, Biden directly labels Russia as an opponent. The years of Trump's presidency have been quite good for Russia, so it's likely analysts in the Kremlin are calculating the costs of a Biden win.

Current US sanctions on Russia since 2014 Crimea Invasion

In 2014 Russia illegally annexed Crimea and began to interfere in Eastern Ukraine. In response, the West implemented multiple economic sanctions which have continually been applied over the years. The US not only imposed sanctions in response to Russia's invasion of Ukraine, but also due to election interference, malicious cyber activities, human rights abuses, use of a chemical weapon and weapons proliferation. The basis for these sanctions is the Countering America's Adversaries Through Sanctions Act (CAATSA) which provide sanctions against any Russian government officials and those who offer them support, as well as persons who operate in the Russian arms sector and key sectors of the Russian economy. Sanctions under this act have no end date and can only be repealed by Congress.

Potential flash points that could cause future sanctions

Sanctions imposed against Russia have grown tangled over the years, made up of bans and restrictions staggered over time and covering a broad range of topics. However, there remain a number of contentious issues that could further add to Russia's sanction woe:


In recent years, in response to election meddling, two bipartisan bills that seek to sanction Russian sovereign and corporate debt have circulated without making it into law. If Biden were to become president, it is likely he would be less favourable towards Putin, suggesting tougher sanctions may come into place against Russia. Considering the increasingly tense political climate, it is likely that current sanctions will continue to be extended and new ones may be added.

The impact of Sanctions on Russian market

The below chart shows how over time the reaction to sanction scares in the Russian Rouble has changed since 2018, with the currency now no longer underperforming a wider measure of EM currencies.

Thus, history suggests that sanctions have a negative impact on Russian markets and flows, but perhaps due to a function of sanctions fatigue and stronger global capital flows since 2016, investors are becoming numb to the new sanctions threat, especially as the recent history suggest little appetite for more harsh penalties. 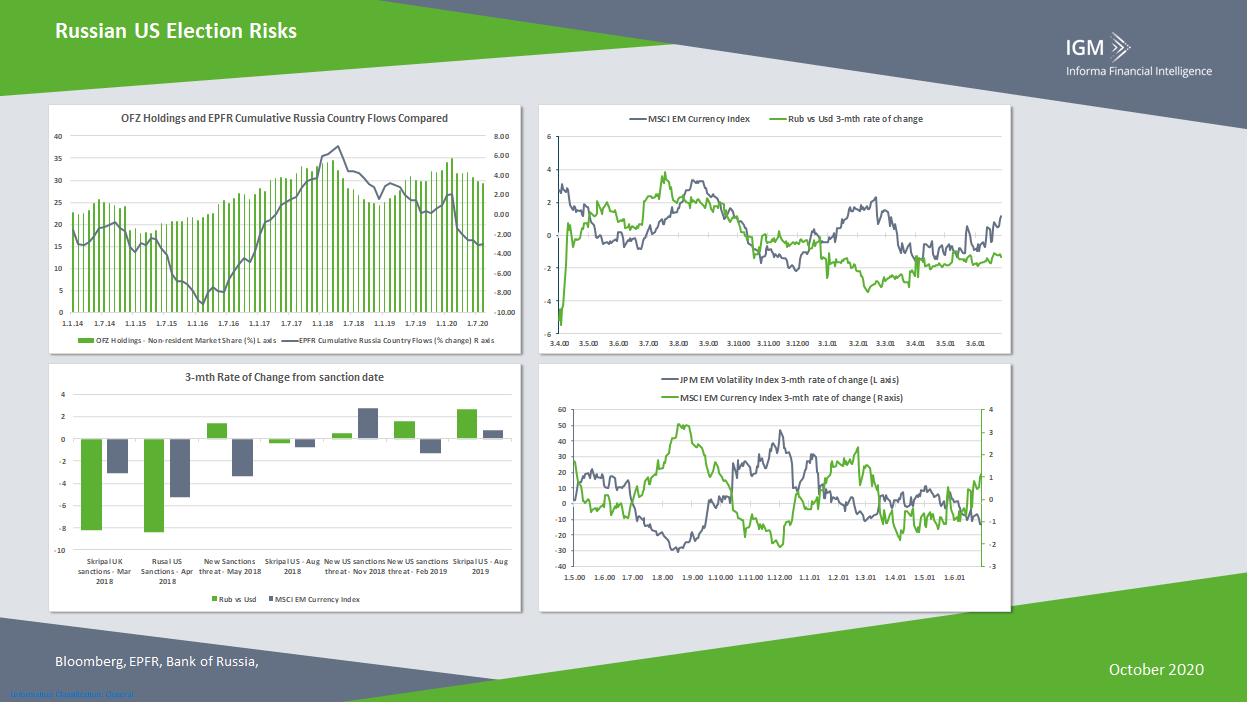 What the US Election outcome means for Russian markets.

Away from specific Russian risk, there is concern the US election outcome could be delayed in 2020, like it was in 2000, and it might take time to count postal ballots. There are also doubts about Trump's commitment to a smooth transfer of power. Thus, this election is expected to treated as broad EM risk event, which could see choppy trading conditions in October without a clear market direction. EM FX will be the primary channel to express views around the US election, although the recent sell-off has already helped create potential entry points, especially as the current polling for Biden/Democrat win should in fact benefit EM on the whole. It is hard to see investor flows turning strongly positive into that trade until the US elections are out of the way, with many investors in 'wait-and-see' mode until the US election.

The last contested election and the one that presented such a clear choice between differing ideologies was the 2000 Bush vs Gore election. Then, EM FX (as measured by the MSCI EM currency index) saw a huge spike in volatility and a related slump in currencies from Sep-2000 into year-end. Then there was a strong rally in Q1 2021.

It is widely believed that the most negative outcome for Russia would be a win for Democrat candidate Biden, not just because of the increased chances of a contested result, but because of the increased chances of Russian sanctions appetite being reignited. If the status quo resumes and President Trump is re-elected, then this is likely to have a relatively benign impact on EM markets, although there may be a relief rally in Russian markets.

How to position in Rub?

With the polls increasingly moving in favour of Joe Biden, the market may start becoming comfortable that the election outcome will not be a tight run race and that the Democrat candidate can win in November by a margin that will make Trump unable to contest the result. This should favour a risk-on shift and support Emerging Market assets in general. However, as we have highlighted, for Russia a Biden win may not be the optimal outcome and thus, we expect that the Rouble will underperform.

We believe the best way to position heading into the US election is to short the Rouble vs a currency that is likely to be less volatile in the run up and welcome a Biden victory. Hence, we recommend a short RUB/KRW position, targeting a drop through support around 14.600 to the record lows at 14.129. 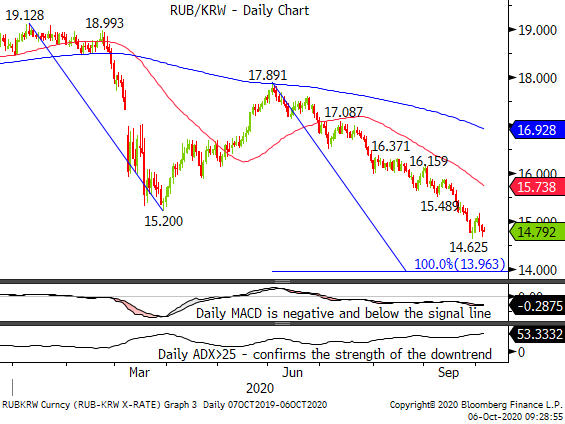