August marked the fifth straight upside month for the MSCI EM Index of stocks, the longest winning streak since 2017. An advance of 2.1% for the month took the index to 7-month highs and just over 1% away from recouping losses on the year (see the below dashboard), with equities globally still buoyed by unprecedented policy stimulus. Gains were albeit more modest than prior months amid rising US-China tensions and a pick-up in coronavirus infections across several countries, as worldwide cases surpassed 24mn (and rising still).

Meanwhile, the premium investors pay to own EM sovereign debt over USTs narrowed further below 400bp for new lows since early March (per the JPM EMBI, see the dashboard), thanks to ongoing support from central bank stimulus and the continuation of the reflation trade that continued to prop up the 10-year UST yield.

Rising UST yields have done the US Dollar no favours by ensuring investors look elsewhere, whilst the sparring in the US Congress over extending stimulus continued to undermine the US unit, which has been further pressured by a dovish Powell last week, leaving the DXY languishing at fresh 2+ year lows. This has also given some tailwind to EM FX markets, offering the MSCI EM Currency Index the impetus needed to also recoup the losses recorded in March (as can be seen in the dashboard). 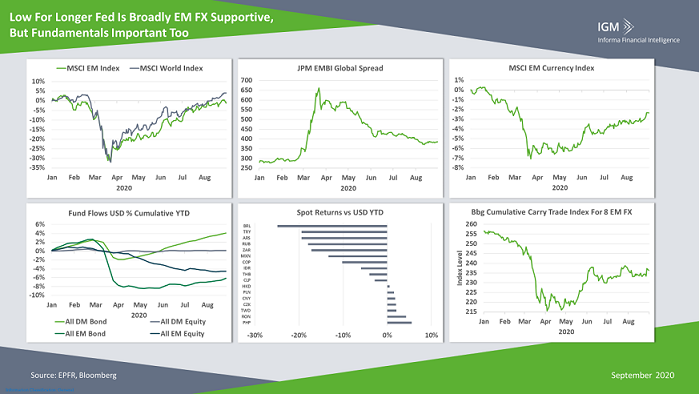 Broadly speaking, the Fed's new policy framework of focusing more on average inflation and higher employment, which suggests rates will stay lower for longer than other countries, could prove supportive for EMs and riskier assets over the longer-term. In the near-term, all eyes will be on the September 16 FOMC meeting for further clues on forward guidance and the asset purchase programme, with a focus on any mention of yield curve control perhaps.

From what we have seen, EM FX market notes post-Powell have been mostly bullish and for some analysts, the Dollar's decline has only just started. Our view is that the Fed policy change to average inflation targeting should be the main negative driver of the USD over the coming weeks. Covid could also stay a front and centre focus amid a risk the US economic outlook could be further negatively impacted by more re-closures in hot-spot states, thus further undermining the Dollar. That's potentially good news for EM currencies.

From a technical perspective, the outlook is still broadly constructive for EM FX markets, with the below chart pointing to an extension of the 5.5-month recovery in the MSCI Emerging Market Currency Index back to early to levels last seen in January/February, the 1643.54/1654.83 zone, and perhaps 1673.26. 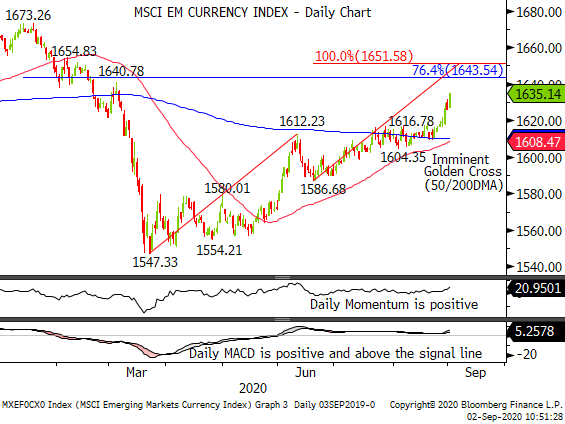 However, a more selective approach may be warranted as EM fundamentals take on greater significance

For EM FX traders, there are, albeit, other various factors to navigate in the short-term. The US presidential election considerations will increase in the lead up to the 3 November vote and the Dollar could bounce if Trump surprises and wins. Another important factor to watch is whether a phase four fiscal stimulus package will be passed in the US.

Moreover, whilst the outlook appears broadly favourable for EM FX, we are expecting fundamentals to take on more significance ahead amid the persistent backdrop of low carry (see the above dashboard for the gauge that measures carry trade returns from eight EM FX markets funded by short positions in the USD) and given various idiosyncratic risks across the region, thus driving some divergence.

Although the conventional easing cycle is close to being exhausted for many EM countries - with the onus shifting more to fiscal policy, generally speaking - interest rates in the region are unlikely to go up anytime soon, with accommodative policy needed to continue supporting economic recoveries from the sharp-coronavirus lockdown induced contractions of Q2. This of course applies to Developed Markets too. This means EM investors will have to acclimatise to low carry across most currencies, leaving investment decisions increasingly centred on fundamentals, with a view to relative growth rates, fiscal health and economic policy transparency among other factors.

Based on fundamentals, Emerging Asian currencies - notably the CNY, KRW, TWD and THB - appear to be viewed most positively among EM FX analysts, with a cyclical recovery generally anticipated, given that public health situations are now largely under control.

By contrast, among the EM currencies that continue to stand out as vulnerable are the South African Rand and Turkish Lira, despite also already being among the worst performing currencies YTD (-19% and -16% vs the USD, respectively). The former because of its high and rising levels of government debt - and expected difficulties in achieving fiscal consolidation amid a particularly weak economic environment - and the latter because of a lack of central bank credibility amid a reluctance to deliver a formal rate hike that is needed to durably lower inflation.

In summary, the global liquidity story remains supportive for EMs and wider risk assets, and the recent change in Fed policy, together with current narrative of negative US real yields, should aid EM portfolio flows. As can be seen in the dashboard, the YTD net cumulative outflows from EM equity funds (in place since March) already look to have moderated in recent months (to ca. 6% in AUM terms from more than 8%), whilst YTD net outflows from developed market equities have stabilised (under 5% in AUM terms). Meanwhile, the broad outlook for EM FX markets remains constructive - aided by a weaker USD - and the charts are signalling an extension in the MSCI EM Currency Index. However, in what is ultimately a low carry environment, fundamentals may take on greater importance among EM investors.