Over the past 4-weeks the HUF has been the second worst performing EM currency vs the USD, sliding over 3.6%, and EUR, down ca 3.75%. The PLN and CZK also lost over 1.0% vs the USD and vs the EUR. This pushed Eur/Huf back above 360, the strongest since March, whilst Eur/Pln tested 4.4700, but crucially stayed below the 4.5000 marker which has capped gains since the end of May, and Eur/Czk has stuck to 26.500, again below levels seen in June even (see chart below)

Back in our viewpoint of early July, we highlighted the CZK as a regional outperformer, and with that the PLN as the most likely to underperform, and whilst the former has proved correct with the CZK leading EM gains vs the EUR since then, the PLN has also performed well and it is the HUF that has struggled.

This is because Poland's H1 GDP performance was better than most and there has been a fast recovery since the economy bottomed in April. This has led to revised FY20 GDP growth forecasts to ca -3.2% from ca -4.0%. This has helped stabilise the monetary policy outlook, amid a stronger than expected economic recovery, which should prevent the PLN from depreciating beyond 4.50/Eur.

Thus the focus is now on the HUF, which as mentioned has been testing lows since April. This after Hungarian Q2 GDP saw the steepest contraction amongst its peers of -13.6% y/y, and CPI began to accelerate sharply in July, reducing the real rate on the HUF so that it is now the most negative it has been since January (see dashboard below), ahead of the elections. 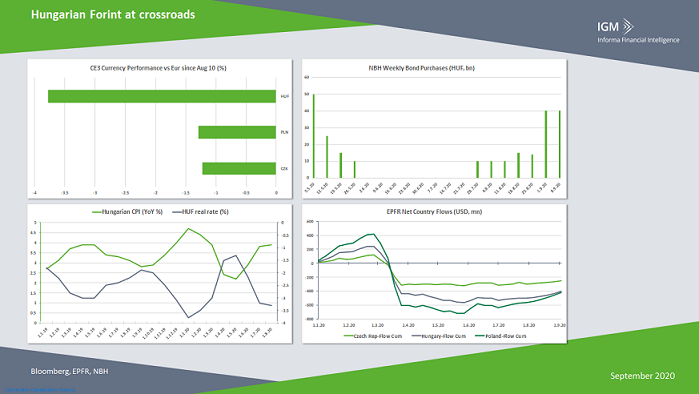 What the weaker HUF means for monetary policy?
The HUF's slump since Aug has been complicating the work of the new monetary policy chief Virag, who is trying to pull the economy out of the above mentioned slump even with inflation above-target and accelerating inflation, (hit 3.9% y/y in August).

Some have drawn parallels with Turkey and Poland, who are seen as inclined toward looser policy, while investors are nervous over inflation. However, it would seem that perhaps the Polish central bank may not need to pursue further unconventional policy easing, as mentioned above.

On the other hand the NBH has been deepening its unconventional policy response, announcing in August that it will increase the amount of weekly govt securities purchased under its QE programme amid a worsening economic outlook this year and a widening budget deficit that is set to reach 7%-9% of GDP this year (per the Fin Ministry).

The focus now is on bond purchases of maturities over 10-years and the CB has duly increased its weekly QE purchases to HUF40bn at the last two auctions (see dashboard). There is plenty of room for maneuver on QE as so far the CB has bought HUF239bn since May vs the HUF 1tn cap on the scheme.

However, there are now signs that that the NBH is reconsidering its stance. It this week introduced a new FX swap facility to reduce distortions in the money market. Whilst this is aimed at quarter-end distortions that pushed short term borrowing costs below zero in June, the FX swaps may also help bring HUF stability and may put a limit to further depreciation, but a lot will depend on when and to what extent banks use the new facility.

Eur/Huf Outlook - at the crossroads
The NBH FX liquidity swap move this week suggests that the NBH is willing to tighten front-end liquidity conditions in response to HUF depreciation. However, the NBH has also made it clear a benchmark rate hike is not on the agenda in the medium term, and if inflation stays above target on supply shock, then this will push the HUF towards those April lows.

Much will depend on the take up of the new FX liquidity swaps and the NBH's new economic forecasts that will be due at the September meeting.

As it stands the HUF's recent under performance should fade as most of the bad news is priced in and if the NBH is correct than inflation is at its peak and should begin to slow again towards the 3% target by year-end. However, there is also very little scope for the HUF to appreciate, as the real rate is now the most negative within the region.

Thus Eur/Huf to trade in a narrow range above, 350, but with risks for an upside spike, which our charts below suggest could see 369.54 hit. 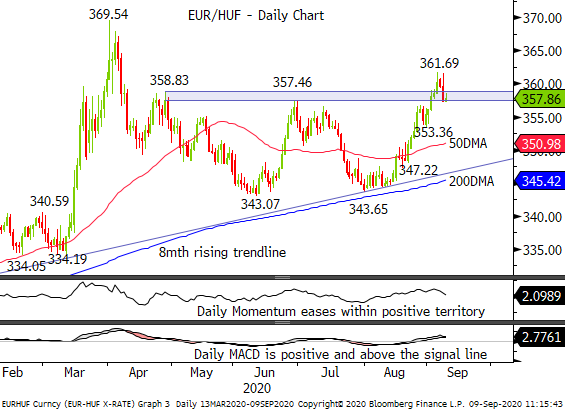