Brazilian investor sentiment over the past month has been driven by debates on the post-Covid fiscal adjustment. With the economy emerging from the pandemic, the pressure is on the government and President Bolsonaro to return as quickly as possible to pre-Covid spending levels and austerity pledges. However, there is a pressure from within government and the wider populous to of course sustain higher public expenditures, especially as President Bolsonaro's popularity has been given a boost by the social programmes.

This has ensured the public sector spending cap has been up for debate, leading to a decline in the BRL. The spending cap rule is seen by investors as the most important symbol of Brazil's fiscal credibility, as it limits growth in public spending and investment to the previous year's rate of inflation. Investors argue that a return to a strong fiscal tightening is needed to prevent the government debt trajectory from entering an unsustainable path higher.

Last week, the USD/BRL broke resistance at 5.5065, which had held since the start of June, after the Senate shocked markets by voting down a bill that maintained a freeze on public sector wages. The bill was later upheld by Brazil's Lower House, but the BRL saw only a limited recovery as the Senate's actions revealed cracks in President Bolsonaro's congressional base.

President Bolsonaro has been wavering in his support for the spending cap, given his popularity has been rising in recent weeks, after dropping during the pandemic, and he wants to ensure this momentum continues into the municipal election on 15-29 November. Bolsonaro has a signature social programme known as Renda Brasil, or Brazil Income, that will extend the monthly social programmes. This was to be combined with job creation stimulus and an infrastructure investment programme, in a new economic programme, and be wrapped up in a bill that also includes offsetting austerity measures.

On the other side of the argument is Economy Minister Guedes, who is dedicated to austerity and called the Senate's decision to allow wage increases for public servants a “crime against the country". Guedes is becoming increasingly isolated in his defense of fiscal responsibility, as several cabinet members have aligned themselves with lawmakers who want Bolsonaro to loosen the spending cap rule.

The Covid-19 outbreak in Brazil is one of the worst in the world in terms of cases and deaths, with over 3.6mn confirmed cases and over 114k deaths (as of 23rd August). This is the second worst outbreak in the world, behind only the US. This is due to a President who did not take the outbreak seriously and was reluctant to shut down the economy. A large informal labour economy, already wide income disparity and a heath system already at near breaking point only added to the pandemic's ability to wreak havoc.

The Brazilian response to the pandemic was similar to other countries. The government launched an emergency support package of more than BRL1.1tn, more than the entire projected savings from the landmark pensions reform that was due to save the state USD250bn over the next 10-years. The public sector wage freeze was a cornerstone of this package of billions in aid for states and municipalities amid the pandemic. Emergency spending means the spending cap for this year has been broken, but this has been allowed due to Brazil declaring a state of public calamity, effective until December 31 2020. Due to this, the government is not obliged to meet the fiscal primary balance target this year.

However, the virus is ultimately deepening Brazil's economic slump, risking corporate bankruptcies, soaring government debt and a continued rise in unemployment in a nation with already strained finances. The World Bank is predicting a contraction of 8% and potentially as much as 10%, thus taking an even dimmer view than economists surveyed by Brazil's central bank that are forecasting a slide of 5.46% (see dashboard below).

Thus, the pressure remains for the government to sustain spending to revive the economy, and it could do this by extending the state of calamity. However, there is little room for fiscal measures, the government predicted in late April it will post a primary budget deficit of around 8% for 2020 and a nominal deficit, excluding interest payments of 15%, thus, unwinding all and more of the fiscal improvement of recent years (see dashboard below for monthly budget performance). Next year's budget is capped at BRL1.485tn, only BRL31bn more than this year. 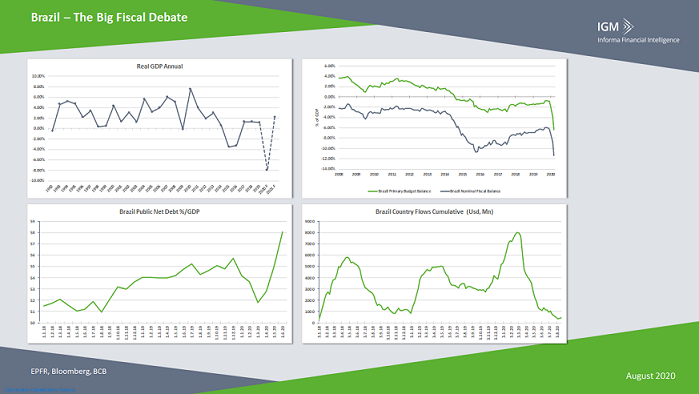 Reform has been the driver of investor appetite

Last year as the Brazilian Congress finally passed the landmark pension reform bill, hopes were high that President Bolsonaro and his economy man Guedes would push on with further economic reforms. Progress had already stalled into year-end and with the Covid-19 pandemic striking this year, the agenda has been well and truly put on the backburner.

Thus, the investor inflows that accompanied President Bolsonaro's election victory in 2018 and then the pension reform bill approval (see dashboard above) dropped off a cliff in 2020, according to the EPFR Brazil country flows data (Bonds and Equities). If the reform agenda gets back on track we would expect these inflows to pick up again like they did after the pension reform bill was passed in October last year.

However, this is looking unlikely, as the Senate's move in August underscored the challenges the government is facing in the upper chamber, where defeats are mounting ahead of crucial votes, including on a reform of the country's tax system. The Senate approved a proposal opposed by the government that limits the interest rate banks are allowed to charge their clients during the pandemic. Bolsonaro's administration plans to vote in Congress at least seven bills changing key regulatory frameworks that it considers necessary to unlock economic growth. Potential upcoming votes in the senate include a bill to grant the central bank formal independence, a proposal to extinguish a large part of existing federal funds and a reform of public sector jobs. However, with elections looming, lawmakers may be unwilling to be seen backing austerity amid a pandemic.

The economic team has already been hit by some high profile departures because of the lack of progress on the reform agenda. Salim Mattar was brought in to oversee the privatisation drive, seen as key for reducing state debt and boosting productivity, but quit in August citing a lack of progress. The government did not sell any of the 46 firms directly controlled by the federal government. The second leaver was Paulo Uebel, brought into lead an overhaul of Brazil's massive public sector with administrative reform, which has been put on hold.

Could Economy Minister Guedes be next? It would seem that if President Bolsonaro decides not to go down the fiscally responsible route then Guedes will quit, which itself would be a big negative for markets, who trusted Guedes.

USD/BRL direction will depend on the 2021 budget

The fiscal puzzle is expected to come together in the coming weeks when the economic team submits its 2021 budget proposal. The fresh economic package mentioned earlier was due to be revealed this week, but has been delayed due to the government not being able to agree on extending the monthly emergency aid, which Bolsonaro wants to be at least BRL300 a month, but Guedes has rejected this.

We see the new economic package as a positive step, but it still needs to be approved by Congress and the Senate, and at the moment can not even be agreed on by the government. However, the 2021 budget will be the crucial document and if it signals that expenditures will be back to the pre-pandemic trend as soon as the health crisis ends, this could support the BRL. If it instead hints at abandoning or altering the spending cap (via extending the calamity situation) to accommodate for fiscal stimulus unrelated to Covid-19, this could see the BRL head for fresh record lows.

Whilst the situation is uncertain we see potential for USD/BRL upside, with the below technical study suggesting the current upside move could extend to 5.7734, which if taken out could open up a test of the record high of 5.9700. 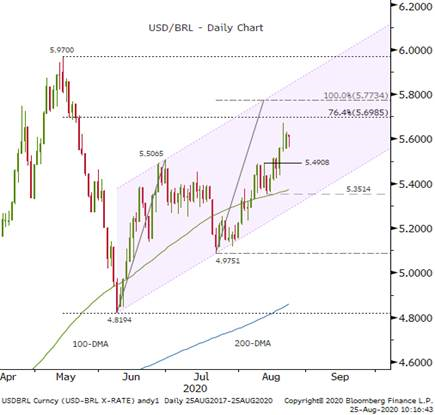