Viewpoint: 2020 has already proved to be another record year for ESG issuance

Green and sustainable/social bond issuance has exploded in very recent years as sovereigns, corporates and financials have all rushed to tap into investors' increasing care for the environment and climate change, and subsequent demands for their money to make a positive impact on society and the world at large. 10-years ago such issuance totalled just USD600mn globally, increasing to almost USD35bn in 2015, and in 2019 it topped USD200bn, according to our database, which tracks just international syndicated bonds.

2020 was expected to be an even stronger year for issuance, particularly with the sustainable bond market still in its infancy and seen having plenty of room to grow.

The Covid-19 pandemic then put a dent in Green issuance and general capital market activity in the latter part of Q1/early Q2, although this did prove to be temporary. Indeed, after dipping as low as USD7bn in March, monthly Green bond issuance had more than doubled by May and has continued to increase, as can be seen in the dashboard. Green bond issuance ytd has exceeded the same period last year by ca. USD40bn (at ca. USD134bn) and if anything, the pause earlier this year looks to have set the market up for a strong run into year-end.

Meanwhile, it was notable that whilst Green bond issuance dropped off earlier in the year, there was a surge in social and sustainability bonds liked to coronavirus support measures, which helped to pick up the issuance slack for the wider ESG market, as can also be seen in the dashboard.

As a result, Green and ESG/SRI bond issuance reached almost USD114bn in Q2, a quarterly record and an increase of more than 85% on Q1.

In fact, globally, Green and ESG/SRI bond issuance combined for the year is already at a record ca. USD260bn, more than double the ca. USD124bn for the same period in 2019 and USD60bn more than all of last year's total, according to our records (see the dashboard).

So far this year, Green and ESG/SRI bond issuance accounts for a little over 6% of the total global bond issuance that we have tracked, compared to 5% for the whole of 2019 and up from 1% in 2015. Hence, this asset class has formed an increasing share of all annual bond sales recorded globally.

Breaking down the figures, on a sector basis, SSA easily makes up the bulk of the Green and ESG/SRI bond issuance year-to-date, at just over USD160bn, which is a new annual record. Finance has raised around USD36bn and corporates ca. USD63bn, both up on this time last year.

September has provided a number of firsts for ESG issuance

It has been a couple of weeks since the primary market restarted after the Summer lull, and of the USD264bn that has been issued globally so far in September, around 14% of this, or USD38bn, has been some form of ESG issuance. The majority in the form of Green bonds, but there has also been a fresh increase in broader social bonds and all have attracted strong demand. Below we list some of the notable deals so far:

Meanwhile, data tracked by our partners at EPFR, shows ytd cumulative net inflows to SRI/ESG tracked bond funds have maintained the upwards trajectory that has been in place since March, reaching almost 20% of AUM this month (see below chart). These flows have notably outperformed that for non-SRI/ESG bond funds and this is a trend we would expect to see persisting. 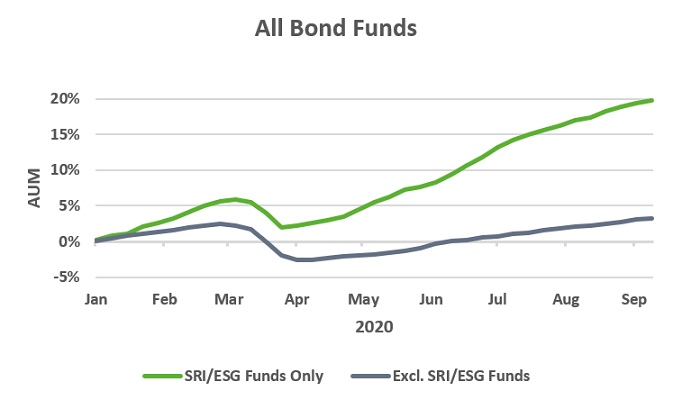 Back in August, Moody's said it was expecting environmental, social and governance risks to become increasingly important, underpinning the continued growth of the market, and projected the volume of newly issued debt based on environmental, social and governance principles could reach a new record USD375bn this year. With regards to Green bonds, the most mature segment of the ESG market, Moody's has estimated between USD175bn to USD225bn would be issued, but was forecasting as much as USD300bn in February, prior to the pandemic.

The performance of recent deals amid robust orderbooks supports expectations for continued growth in the ESG sector and from an investor perspective, growth in Green and ESG/SRI bond issuance provides greater opportunities/selection for portfolio diversification for those seeking a positive impact from their investments.