China Insight: The US May Consider Limiting Investments in China

A couple of negative headlines came out on 8 October before the 13th round of US-China trade talks starts.


The first news report suggesting Donald Trump has given the green light for his administration to discuss ways to limit US investors' portfolio flows into China came out on 27 September. The possible ways, as per the report, include delisting Chinese companies from the US stock exchanges, limiting government pension funds' exposure to the Chinese market, and putting caps on the Chinese companies included in stock indexes managed by US firms. Though the report was already denied by the White House trade advisor Peter Navarro, its re-surfacing suggested Washington could be looking to work it out as a part of the US-China decoupling strategy.

Based on EPFR data, US-domiciled mutual funds and closely related investment products hold about USD280bn in Chinese assets, most of which are equities. Based on the FX-adjusted cross-border portfolio flows, Goldman Sachs estimates that US investors bought about USD30bn of Chinese equities from mid-2016 through Q1 of this year, but have begun to pull back on those investments more recently amid prolonged US-China trade disputes and growing risk of economic slowdown in China (chart 1). The above figures do not include several large Chinese companies that are domiciled outside of China but still rely on disclosure exemptions as a foreign private issuer. When this is taken into account, the Chinese equities held by US investors could be worth as much as USD785bn.

As far as the trade talks are concerned, the Chinese Commerce Ministry said very recently China is ready to do a trade deal with the US on selected issues and is prepared to set out a timetable for the harder issues to be worked out next year. This remark reinforces our view that the Chinese leaders have a strong bias in favour of a better-late-than-early tactic in pursuing the final solution to the US-China trade conflicts.

Further to our view on USD/CNH FX rate given in the previous issue of this publication, we now think 7.20 will be re-seen by the end of October (instead of November) due to the failure of the US-China negotiations in mid-October to yield meaningful progress towards an end of confrontation. Any further news increasing the speculation over a potential limitation on US investors' portfolio flows into China in the medium term could make 7.40 reachable by the end of this year (chart 2). 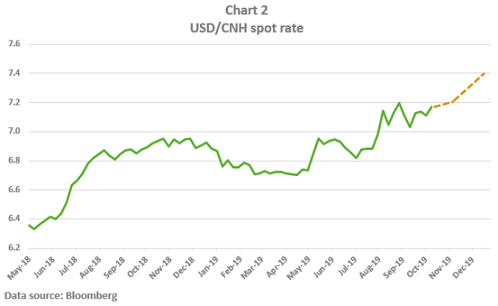