The bond market got sold off sharply in the first half of May, regardless of the stable liquidity. We attribute the sell-off partly to mounting supply pressure and partly to the market being overly crowded with long positions. 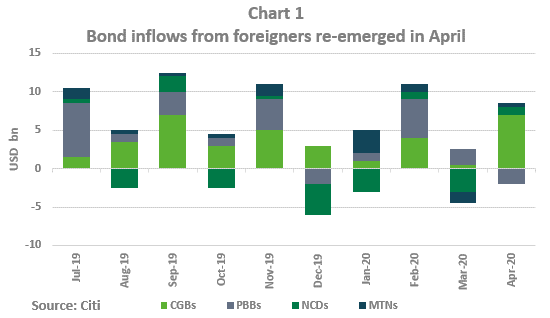 Net foreign inflows into the China bond market re-appeared in April, reversing the moderate outflow in March (chart 1). As a result, offshore investors' CGB holdings increased sharply in April (chart 2). In our view, foreigners' strong demand for china bonds in April was mainly driven by their expectations about a more dovish policy stance before the NPC meeting and their hunger for higher yields (note: China bonds offer a much wider yield premium over US Treasuries than many other EM Asia governments). 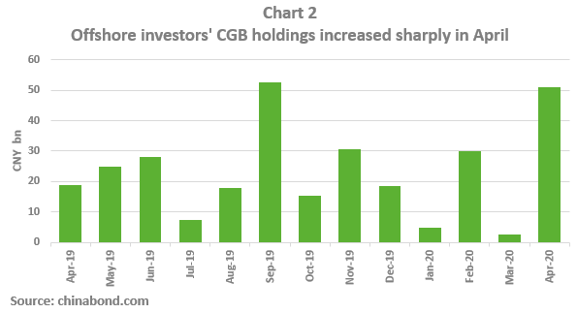 Not only bonds, equities also saw foreign inflows in April, but of lesser magnitude. Northbound saw decent inflows of USD8bn in April, partially reversing the record high outflow of USD10bn in March, while southbound inflow decreased to USD3bn from USD18bn high in March. On a net basis, northbound flow versus southbound flow suggests an inflow of USD5bn in April (chart 3). 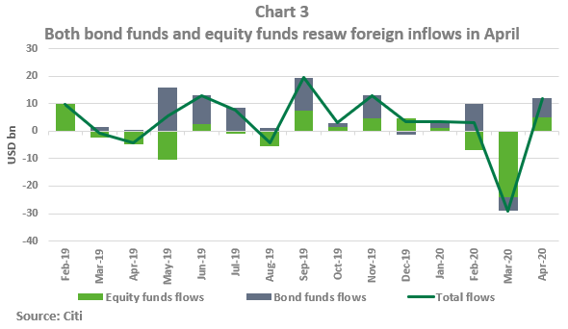 Back to the bond market, we think after the sell-off in the first half of May, a lot of long positions were already shaken out. With the NPC meeting approaching, sentiment will be stabilising. We expect bullishness will return to the market soon as the State Council regular meeting chaired by Premier Li Keqiang on 13 May expressed the intention to step up macro policies to hedge against economic challenges. Though Li did not tell what dovish measures will be taken, we expect he will give more messages in the upcoming NPC meeting.