The 5/1 holiday is coming which is the first long holiday after the COVID-19 came under control in mainland China. Historically, liquidity tightening would be emerging during the third week of April on the back of holiday-related cash demand from both individuals and business entities. However, this kind of liquidity tightening is not happening this year (chart 1). We think consensus in the market is that Beijing definitely will ensure the banking system is equipped with enough liquidity during the holiday. We won't be surprised if PBOC resumes liquidity injection via OMO right before the holiday starts on 1 May. 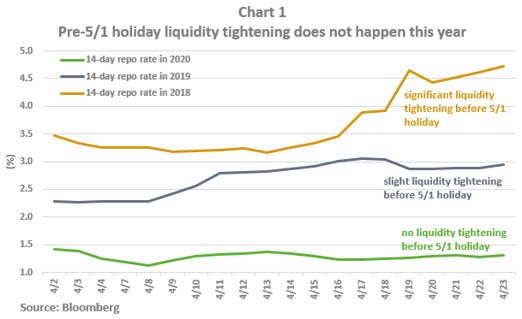 In regard to the government bond market in mainland China, we note its yield curve has been steepening for quite some time now. Despite that, the possibility of further curve steepening should not be underestimated. Over the past two months Beijing has taken a lot of measures to support the economy which was severely hit by the COVID-19 epidemic. Last time we saw such a strong stimulus push was November 2008. Chart 2 compares the yield levels of CGBs we presently see with that eleven years ago (i.e. 2009) after a CNY4tn stimulus package was announced in November 2008. As per the chart, 2-year CGB is still cheap, relative to 5-year and 10-year papers. The latter two now see their yields significantly lower than their levels in April 2009. 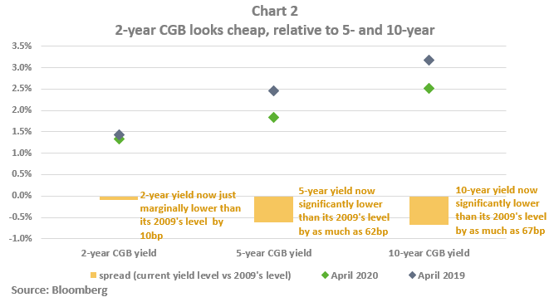 To sum up, we expect demand for the 2-year CGB will pick up again right before or after the 5/1 holiday, especially if PBOC resumes liquidity injection.