Beijing announced that the National People's Congress (NPC) will commence its annual meeting on 22 May, after being postponed from 5 March due to the COVID-19 outbreak. Nobody is sure if the year 2020 GDP growth target will be announced there given the deep downturn in Q1. If a target is given, we guess it is going to be at an achievable level, say 3% or slightly lower. No matter whether a growth target will be given, we will definitely see a bigger fiscal budget deficit number and higher CPI target in the annual Government Work Report (GWR) announced at the NPC.

We expect a significant increase in the headline fiscal budget deficit to 4.5% or even 5.0% of GDP in 2020, from the budgeted 2.8% in 2019, given a declining fiscal revenue and an expanding expenditure. Meanwhile, a quota of special local government bond issuance at CNY3.5tn (not surprising if’s as high as CNY4tn) will be given. Moreover, the CPI inflation target will likely be raised to 3.5%.

In April this year, we saw a seasonal decline in local government bond supply, which will be followed by an increase in May and June (chart 1). Repeating its pattern in previous years, supply will remain abundant in Q3, we believe. 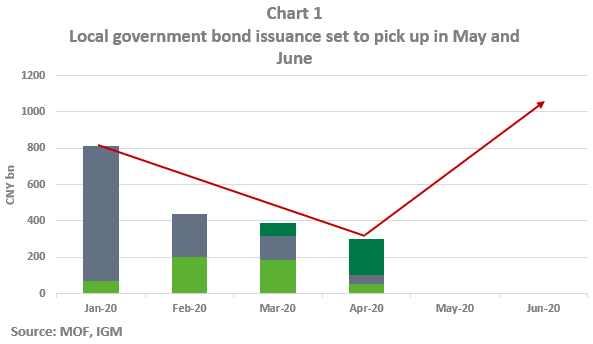 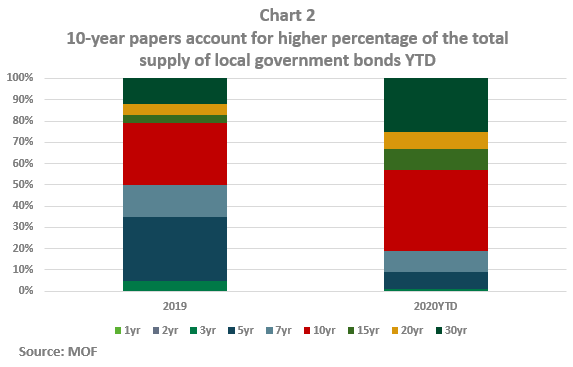 Historically, net OMO injection size increases whenever local government bond supply is picking up (chart 3). Given that supply in April this year was small, we were not surprised by PBOC's decision to stop making net OMO injection throughout the whole month. With supply picking up sharply in May, we will see PBOC resume net injection after the 5/1 holiday. 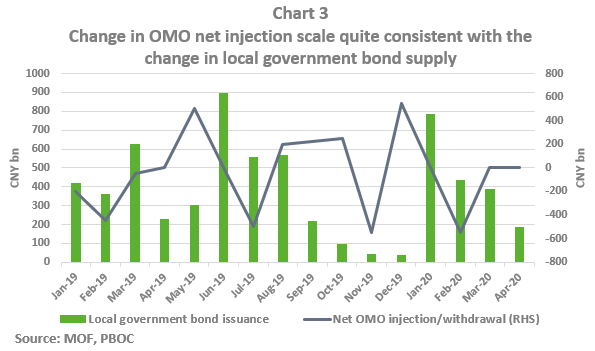