Inflation: A mythical beast of antiquity?

When readers of this blog were young, their bedtime fare probably included tales featuring dragons and the people who either slew or bonded with them. As they grew older, their parents likely told them tales about a mythical sounding but real scourge: inflation and its evil twin stagflation.

As the chart below, which shows year-over-year change in the U.S. Bureau of Labor Statistics’ Consumer Price Index (CPI), for anyone living, working and trying to get ahead financially in the 1970s, inflation was all too real. 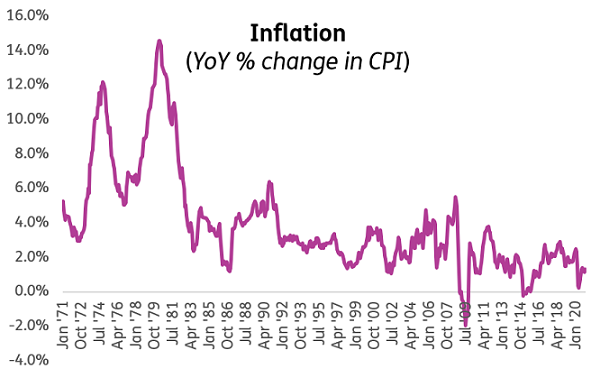 Now, after a long slumber while its cousin deflation haunted the dreams of policymakers, there are growing fears that inflation is about to stage a return.

The case is built on massive central bank liquidity, bulging corporate and personal savings accounts and the demand pent up by the COVID-19 pandemic on the one hand and mothballed capacity, a generational shift towards clean energy and compromised supply chains on the other.

What tea leaves to read?

To calculate the odds inflation will become a factor in the months ahead, we took a stab at building a predictor based on monthly EPFR fund flows and CPI data. Monthly CPI data is released by the Bureau of Labor Statistics between the 10th and 15th of the following month while EPFR’s monthly flows are released on the first business day after the 15th of the following month.

Among the ways EPFR classifies equity funds is by style and sector. For other groups, such as bond or money-market funds, comparable classifications exist.

Overall, we conducted this exercise for over 50 different fund groups. Next, we whittled the pool down, retaining only the groups with significant t-statistics, a measure of predictive power. The table below shows asset-classes retained in order of predictive power (absolute value of the t-statistic). 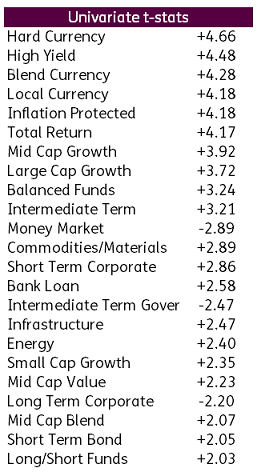 With these fund group level predictors in hand, we combined them into a single multi-variate model. Starting with Emerging Market Hard Currency funds, the group with the most predictive flows, we kept adding factors, working our way down the list.

If a factor proved to be -- or caused other factors higher in the list to be -- insignificantly predictive, it was omitted. In this way we arrived at our final regression shown in the table below. 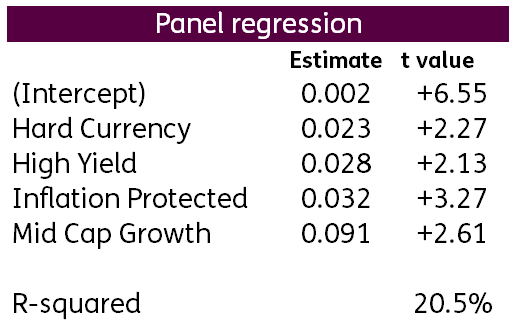 Which brings us to the key question: Does the model we created work?

Not giving up its mythical status just yet

With the data in hand, we took predicted and actual values of month-over-month percentage change in the CPI, compounded them over a trailing-twelve-month period and graphed the result. 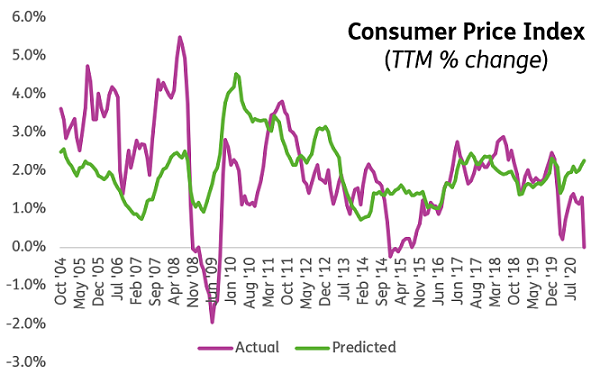 As you can see the predicted values, on average, closely approximate the actual.

The result? Currently, though the predictor has been climbing since mid-2020, it has done so slowly and the trend for the actual number is still heading in the opposite direction.

So, inflation is still slumbering. Furthermore, our predictor suggests there is no need for some central bank St. George to reach for their Ascalon, the name of the weapon used by the original to slay his dragon.