The four Nordic countries in continental Europe, Denmark, Sweden, Norway and Finland, are often viewed as a group of homogenous nations on Europe’s northern flank with a shared aversion to conflict, a taste for social democracy and robust welfare states. Investors tend to approach them as a group that offers some comparative insights and uncorrelated exposure relative to the ‘core’ European markets.

In this blog, we take a quantitative look at the question of the region’s homogeneity, its usefulness as a counterpoint for the rest of developed Europe and the possibilities for extracting alpha from a portfolio investing in only Nordic markets. Our analysis is based on EPFR data and, for the purposes of this blog, we have excluded the fifth Nordic market, Iceland.

Nordic countries: Birds of a feather?

For insight into the questions of Nordic homogeneity and their “outlier” reputation relative to the rest of Europe, we started by looking at the returns to developed markets over the last ten complete calendar years.

For our purposes, each country is characterized by 120 data points that represent every monthly return between January 2009 and December 2018. From this we can establish 120 linear combinations, or risk factors, that encompass geography, volatility of returns, investment styles and other key risk metrics. The riskiest becomes the first principal component, with the next strongest becoming the second. The remaining, weaker risk factors are then discarded.

The two factors that make the cut are used as the axes that allow us to represent our data in two dimensions by way of a simple dot-plot chart. Once the dots are arranged along the two axes, we color pink those that correspond to the Nordic countries, coloring all other markets green. The result is a visual representation (See chart below) showing the return profiles for each country. 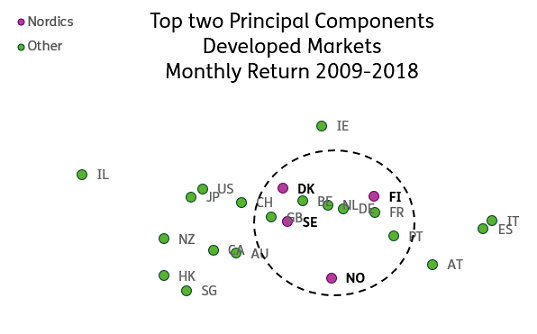 As you can see from the exhibit (a) the Nordics have very similar return profiles and (b) those profiles fall within the same broad range as those of a significant number of Europe’s major markets.

Point (b) suggests that the value of using the Nordic bloc to get a different analytical perspective or investment exposure that is somehow uncorrelated from the rest of Europe may be limited. Point (a) raises the question of how, if at all, you can extract value if your investment universe is limited to Norway, Sweden, Finland and Denmark.

How to pick apples from apples

To tackle the question of relative value among the Nordic markets, we applied a tried and tested methodology based on flow momentum which is defined as the sum of flows, in percentage of AUM terms, into or out of a given market by equity funds with cross-border mandates that report both daily flows and monthly country allocations to EPFR.

Historically investment strategies which buy and sell assets in countries with the highest and lowest scores -- in terms of four-week flow momentum -- have generated significant positive returns over forward holding periods ranging from a week to a quarter.

We rank each of the Nordic countries into four buckets by four-week flow percentage, the same indicator studied by Srimurthy et al. (2018), so that each bucket has one country in it. Q1 has the country with the highest flow while Q4 has the one with the lowest. The table below shows forward returns on calendar-time portfolios formed by sorting countries using four-week flow momentum and assigning them to one of four buckets.

We ran the model using various holding periods ranging from a week to two months. Portfolios are rebalanced at the end of the relevant holding period to maintain equal weights. We report annualized average return difference between each bucket and the average equal-weight return of all four Nordic countries. We also show the annualized return difference between the highest-flow and lowest-flow bucket, together with the associated Sharpe ratio.

As you can see from the column “Q1 ex Q4” in the above table, there are significant profits associated with the zero-cost strategy that goes long the Nordic country with the highest four-week flow percentage and shorts the one with the lowest.

Based on our research, Nordic Countries are indeed somewhat homogenous, but are not as removed from the rest of Europe as is frequently assumed. Their homogeneity, however, does not preclude finding value by making individual allocations within the small universe of Nordic countries.