This May, Prime Minister Narendra Modi of India returned to office with an increased majority in parliament. In this week’s Quants Corner post, we follow the rise of Modi through the lens of EPFR’s fund flows and look at the response of our quantitative EM rankings to several major ‘events’ during Modi’s time in office.

The events that we will focus on are the two national elections which brought Modi to office in 2014 and kept him there - the 4Q16 decision to ‘demonetize’ the Indian economy, and the 2017 implementation of long mooted reforms to India’s patchwork of sales and consumption levies that varied from state to state.

Modi first appeared on the national stage in May 2014 when his right-wing Bharatiya Janata Party, together with their allies, took 336 of 543 seats in the Lok Sabha, the lower chamber of India’s parliament. Markets responded positively to his message of structural reform and regulatory rationalization. Flows into India funds, both equity and bond, proceeded to surge over the following year (See chart below). 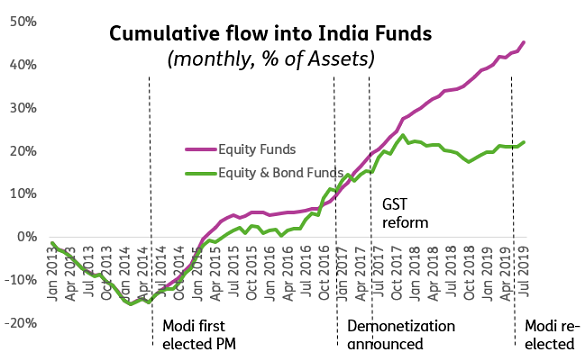 But EPFR’s weekly Emerging Markets rankings, which builds on insights, outlined in the 2018 paper, ‘Fund Flows as Country Allocator’ by Vikram Srimurthy, Steven Shen and Matthew Smalbach, in The Journal of Alternative Investments, sent a less ebullient signal. The rankings, which utilize flows into a country as a percentage of assets held in that country, summed over the trailing four weeks, put India in the fourth of five quintiles on May 14, 2014, the latest date for which weekly flows were known before election results were announced (See chart below). 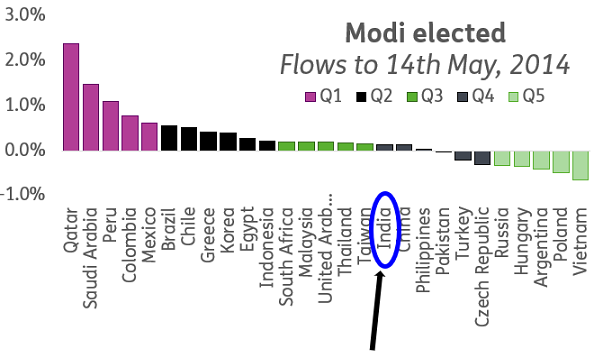 Two years later, in November 2016, Modi’s government made the decision to withdraw 500 and 1,000-rupee banknotes from circulation. This decision, known as “demonetization,” was ostensibly taken to drive curtail economic crime and to move people out of the black market -the shadowy part of the economy where no taxes are paid, and into the regulated, taxed formal economy.

The results of this initiative, which attracted plenty of criticism, were decidedly mixed. From a fund flow perspective, it sharply increased the pool of domestic capital looking for a new home. But regular economic activity was compromised by the lack of cash, slowing GDP growth, and the costs of the demonetization to the informal economy were not offset by gains for the formal economy.

While flows to dedicated India Equity Funds retained their upward trajectory, the EM rankings at the time accurately – in light of what followed – put India in the bottom quintile (See chart below). 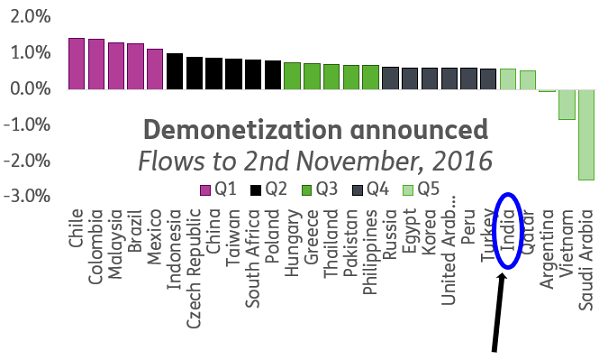 Six months later, however, when Modi began implementing Goods and Services Tax (GST) reform, systematically dismantling the prior patchwork quilt of Octroi taxes that complicated the lives of any business operating in more than one state and replacing it with a national system, India climbed to the middle quintile of EPFR’s EM rankings. 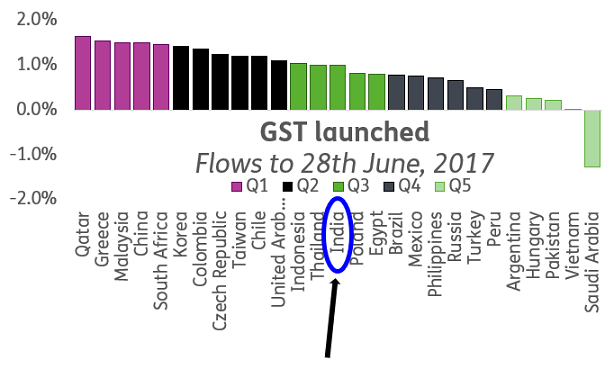 Finally, as Modi steamed toward re-election in May of this year, flows to India Equity Funds powered ahead. But in terms of the quantitatively driven rankings, India remained in the middle of the pack despite Modi’s sweeping victory and interpretation of that victory as a mandate for further sweeping reforms (see chart below). 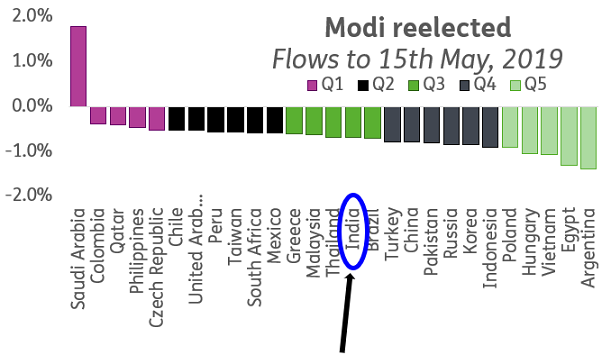 What to make of the disparity between ebullient flows into India Equity Funds and the middling-to-poor rankings assigned to India by EPFR’s model? The flows are certainly consistent with investor responses to other reform stories. Brazil, South Africa, Argentina and Saudi Arabia have all seen flows surge in recent years as new leaders with reformist goals took office.

From a long only perspective, backing a reform story makes sense. While the gap between what is promised and what is delivered is often large, the reforms that do happen can provides tailwinds lasting years – as the 1991 reforms to India’s economy championed by Prime Minister Narasimha Rao and then-Finance Minister Manmohan Singh illustrate.

EPFR’s rankings, however, capture the more pragmatic assessment of fund managers that is expressed in the allocations and holdings decisions. Given the disparity between rhetoric and reality and the laws of unintended consequence that impact most major reforms, those rankings provide a reality check for investors and money managers with shorter time horizons.