Among the reasons for the elevated heights that major US equity indexes have scaled over the past two years are financial repression, strong corporate earnings growth and the outsized valuations commanded by a handful of technology bellwethers. Another factor is the repurchasing of their own shares by US corporations.

At its peak in 4Q18, the value of shares bought back by these corporations totaled over $210 billion. They bought another $190 billion during 1Q19 and over $60 billion during the second quarter of this year. Much of the money that was repatriated by US companies in the wake of the Trump administration’s 2017 tax reforms has been used to repurchase shares.

The practice, while good for shareholders, has been fiercely criticized as a misallocation of capital that could be used to fund research, development and the improvement of human capital. Democratic Presidential candidate Bernie Sanders terms it “corporate self-indulgence.”

But what happens when you screen the emotion and rhetoric out? Are there signals that can be unlocked through a quantitative approach?

TrimTabs Investment Research, part of Informa Financial Intelligence’s EPFR brand, has been tracking US share buybacks for nearly two decades. Using daily US buyback figures, TrimTabs aggregated this data into a monthly series and then divided the monthly totals along sector lines.

Chart No. 1 (below) illustrates this ranking approach and the way it has played out since 1Q09. 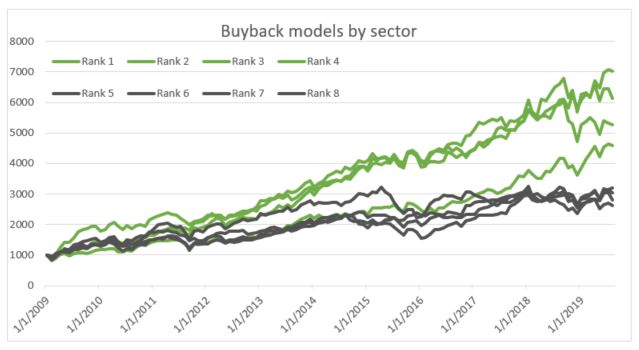 How do the strategies based on this buyback model perform? Since 2009, the excess return compared to an equally weighted benchmark has ranged from 1.08% to 18.6%, except for 2012 and 2016 when the model underperformed the benchmark. (See table 1 below). 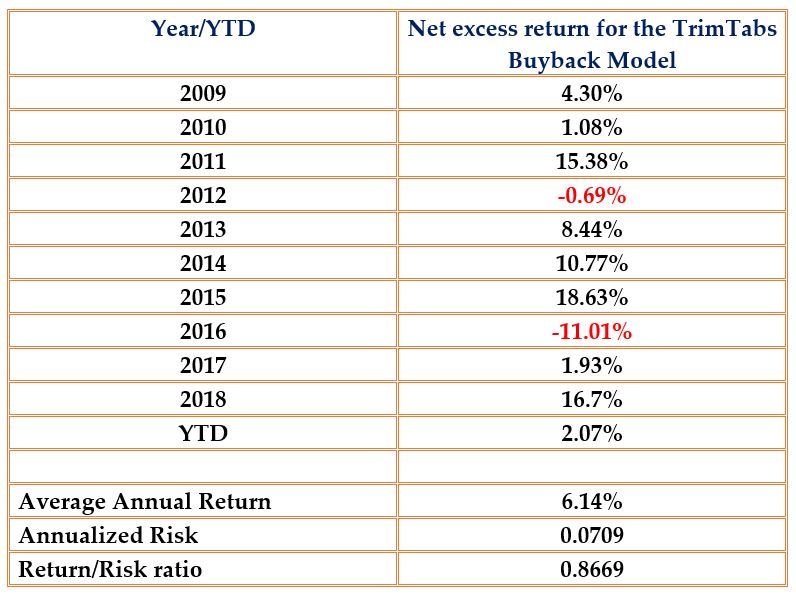 The model’s performance does not entail taking on excessive risk, and for the long strategies the returns have been consistent (see Chart 2 below). The correlation of these strategies with the broader market is low. 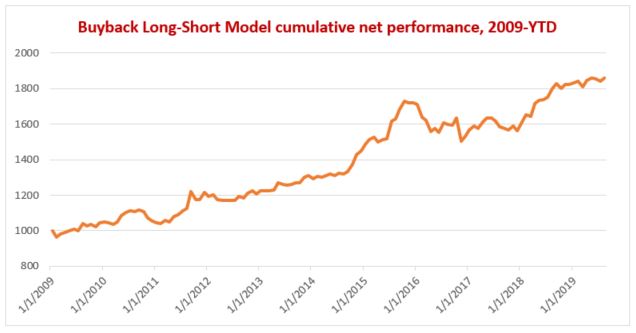 What happened in 2016, the year the year the strategies delivered their worst performance? One factor that clearly had a bearing was the lack of share buybacks experienced by several of the sectors in the model. For example, the materials sector only recorded net buybacks seven out of the 12 months during 2016. The lack of buybacks probably skewed the overall model.

Looking ahead, there are obvious questions about this model’s viability and performance of the strategies if one of the more vocal critics of US corporate share buybacks moves into the White House in early 1Q21. It may be, as Joseph advised Egypt’s pharaoh, that seven years (and more) of bumper buybacks will be followed by a stretch of lean years.

How to re-tool the model to cope with that kind of change is a topic for a future Quant’s Corner.