During the first quarter of this year officials from Tadawul, Saudi Arabia’s main stock exchange, told Reuters that they were anticipating significant flows into the kingdom’s equity markets. The reason for their optimism was Saudi Arabia’s promotion from frontier to emerging markets status, with the attendant expected inclusion of Saudi stocks in major emerging market benchmarks.

How significant could this development be for Saudi Arabian equities? Tadawul’s estimates projected an inflow from passively managed funds of as much as US$20 billion in 2019 alone.

In March Tadawul joined the FTSE Russell emerging markets indices and two months later those belonging to the MSCI family. This, as officials expected, triggered an influx of fresh money.

Figure one captures this surge in flows. It also captures the role that passive funds played, with actively managed funds playing a completely marginal role in this rush to benefit from Saudi Arabia’s new status and its accompanying reform story. 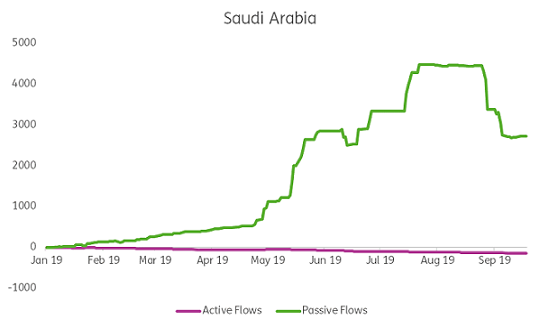 For several months this wave of optimism about the oil-rich kingdom’s prospects swept aside more prosaic concerns such as the weakness of oil prices and the geopolitical risks attending Saudi Arabia’s involvement in the Yemen. Through the end of August, year-to-date fund flows into Saudi Arabia equities totalled $4.5 billion.

But, by the end of August the historic correlation between oil prices and the performance of Saudi stocks began to reassert itself (See Figure 2). The effect on flows to dedicated Saudi Arabia Equity Funds was dramatic. Between August 27-29, more than $1 billion was pulled out of these funds which then sold Saudi stocks to meet the redemptions. Around 25% of the money that has flowed in during the first eight months of the year flowed back out in just three days. 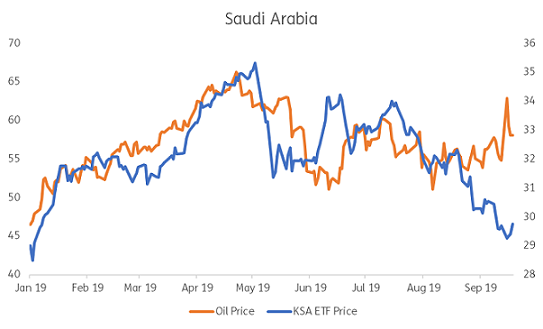 Saudi Arabia is one of the world's top oil exporters. They produce and export more than 5% of the global oil supply. After attacks by drones on oil facilities in Saudi Arabia last week, the production was – for a short period -- cut by 5.7 million barrels per day. As a result, the price of oil climbed up to $72 a barrel.

Oil prices dropped rapidly back below the $70 a barrel mark, reflecting expectations that oil reserves and increased US production will offset any shortages.

From a quantitative perspective, what is interesting is that the spike in oil price volatility did not have a significant influence Saudi fund flows despite the historic correlation. In fact, in the first week after the attacks, there were inflows to the Saudi equity market (see Figure 3).

EPFR’s data also shows that other oil exporters benefited, in terms of flows, during the days immediately following the drone attacks. The stock markets of key exporters such as Canada, the United States, Qatar and the United Arab Emirates, enjoyed the biggest inflows in % of AUM terms between September 16-19.

Geopolitics is always hard to quantify, and even well-established correlations break down. The contrarian response, the hits taken by Saudi Arabia’s oil industry captured in EPFR’s daily flows data indicate that some of the assumptions underlying our models, strategies and analysis need to be revisited and, in some cases, replaced.

What that review tells us, and the practical implications from a quantitative perspective, is something we will share with you in a future Quant’s Corner.