Bulls in an FX shop
Getting good data that produces valid, timely signals is a cornerstone of profitable investing across all asset classes.

Knowing about these positions is crucial, but the available datasets in the market are generally noisy, imprecise estimates of the actual reality. Some rely on surveys which are prone to biases like representativeness and responsiveness of the respondents. Others rely on the positioning data in exchanges.

EPFR has now begun collecting data on the actual allocations of funds to currencies. It has also been exploring ways to unlock the value of this data. One approach that yields good initial results is a simple one: run with the bulls

Using the right tools
The new FX Allocations database created by EPFR starts in 2014. As of Q1 2020, it tracks on a monthly basis the allocation of over 1,800 funds to more than 90 different currencies at a monthly frequency. Figure 1 shows the evolution of the number of funds reporting. 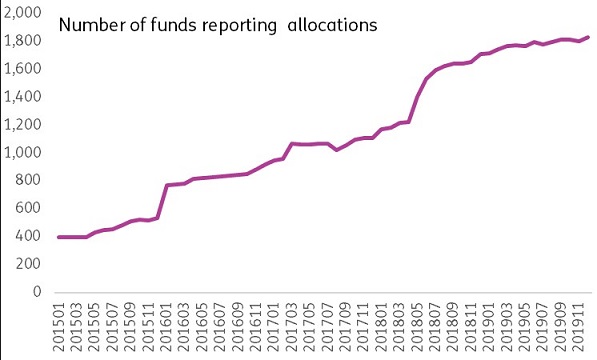 The allocations from this universe of mutual funds and ETFs are obtained from several different sources, including (i) complete portfolio holdings (ii) fund fact sheets (iii) FX allocation reports provided to EPFR by fund managers and (iv) allocations as published on a fund manager’s public website.

FX allocations are the percentage weight that a fund is exposed to each currency through the assets that they hold. EPFR maps each individual security in the file to the currency in which it is traded. For example, in the FX Allocations database an Apple (AAPL) stock would be mapped to the US dollar. In case of Ali Baba Stock, a Chinese company that trades on US exchange, the FX allocation will be again USD.

If hedges are disclosed in the raw holdings files they show up as negative amounts and are added to the respective currency exposure amounts to get a net exposure percentage allocation. The database includes the positions of equity, bond and multi-asset funds.

Profiting from the numbers
The FX allocation dataset can be used to drive several remunerative quantitative strategies. One them harnesses the bulls.

EPFR’s bullish sentiment indicator, applied to currencies, is the percentage of active funds overweight that currency vis-à-vis that fund’s own benchmark. The algorithm is illustrated in Figure-2.

Figure-2: EPFR’s bullish sentiment indicator, the data is for illustration purposes only.

The table below shows the average difference in returns between the top and bottom fifth of EM currencies, sorted based on the latest available bullish indicator, for various holding periods. The strategy is executed by going long the currencies in top quintile and short those in the bottom quintile.

For monthly holding periods, total return differences between the top and bottom fifth of EM currencies, for each calendar year, are reported below.

Figure-4: Total return differences between the top and bottom fifth of EM currencies, for each calendar year

As you can see this approach generates good Sharpe ratios – over one for all four durations – and the decay in performance over time is relatively low.

In future blogs, we will explore other ways to unlock the value of this dataset.