After years of pulling money out of equity funds, retail investors are starting to step back in. EPFR-tracked Equity Funds ended 2020 with eight straight weeks of retail inflows, their longest such run since 2Q06. In this, retail investors are several years behind the institutional money and, as a result, have missed out on strong market returns four of the past five years.

Global Equity Funds have been the biggest beneficiaries of this latest surge in retail interest. During 2019 this group recorded retail inflows 19 of the year’s 52 weeks. In 2020 they posted retail inflows 44 times.

The last time there was such a concentration of retail money going into a single fund category was 2016, and before that 2015. In both cases, the rush into Australia and China Equity Funds ended badly for retail investors. Are Global Funds headed for the same comeuppance?

Have they missed the bus?

Prior to 2020, the chance of a positive retail flow into Equity Funds ranged from one week in every nine during 2014 to one in 25 during 2016. Last year this group attracted retail money two out of every five weeks.

Retail investors could, however, be a closing the stable door after the horse has bolted. The chart below shows the proportion of weeks experiencing inflows into ETFs and the institutional share classes of equity mutual funds in each calendar year alongside the associated total return of the S&P 500 Index for that year. 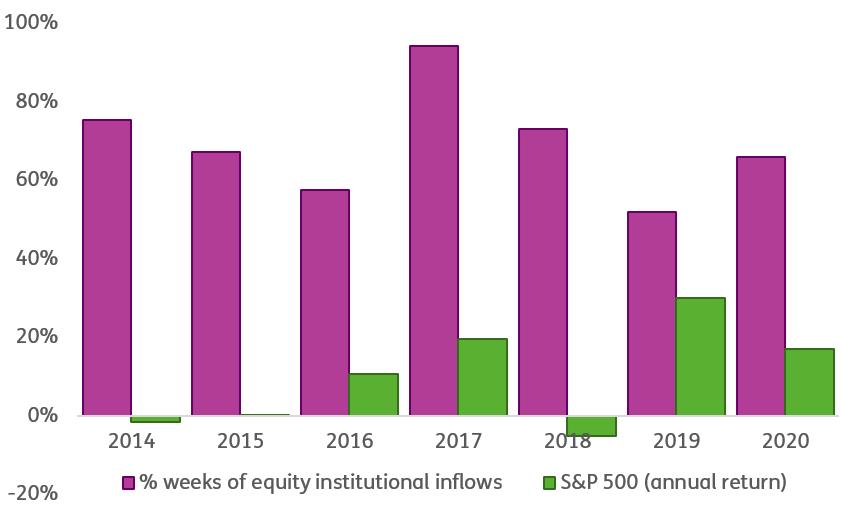 As you can see, institutional investors have embraced equity exposure over the past few years. They have the returns to show for it.

Swapping US exposure for global

But where is retail money going? EPFR classifies funds by the geographic focus of their investment mandate. Studying retail equity flows through this lens shows that, over the course of 2020 that 87%, or $66 billion, of all retail flows to equity funds went to those with global mandates. On the flip side, amongst the equity fund groups suffering retail outflows 59% of the total net redemptions, or $85 billion, came from US Equity Funds.

How normal is it that almost 90% of inflows end up in just one major geographic group in any given year?

If you express inflow concentration as the ratio between the flow into the fund group receiving the most retail equity money and the sum of the inflows into all groups receiving inflows, you can make an informed comparison. Outflow concentration, the ratio between the outflow from the fund group experiencing the heaviest retail redemptions and the sum of the outflows from all groups seeing money flow out, is calculated in a similar manner. 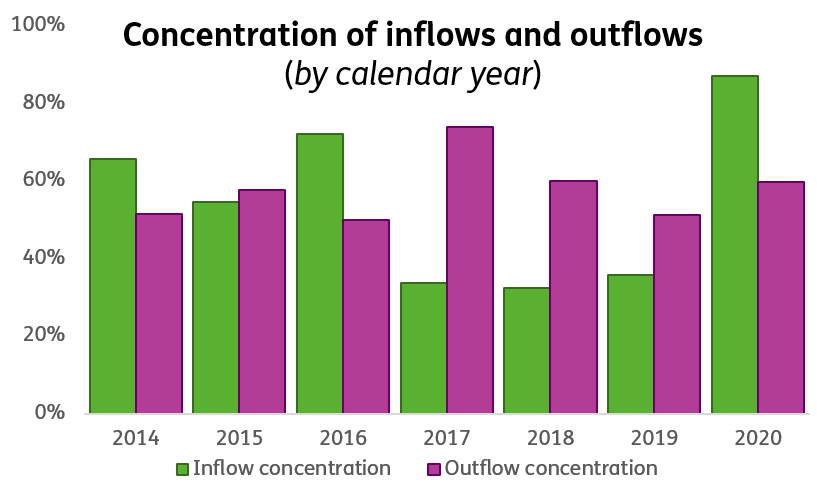 The year where the inflow concentration came closest to the level seen last year was 2016, when retail investors decided to jump into a market that had last experienced recession in 1991.

In the children’s book “Alexander and the terrible, horrible, no good, very bad day”, Alexander, having gone to bed with gum in his mouth and woken up with gum in his hair, grumpily decides to move to Australia.

Did their move in 2016 work out for retail investors? Or was their embrace of Australia Equity Funds no less whimsical than a child’s desire to move halfway around the world to escape his problems?

Judged by the results, the surge in retail flows during 2016 turned out to be more like the latter. The chart below shows returns to MSCI Australia as well as the S&P500 by calendar year. 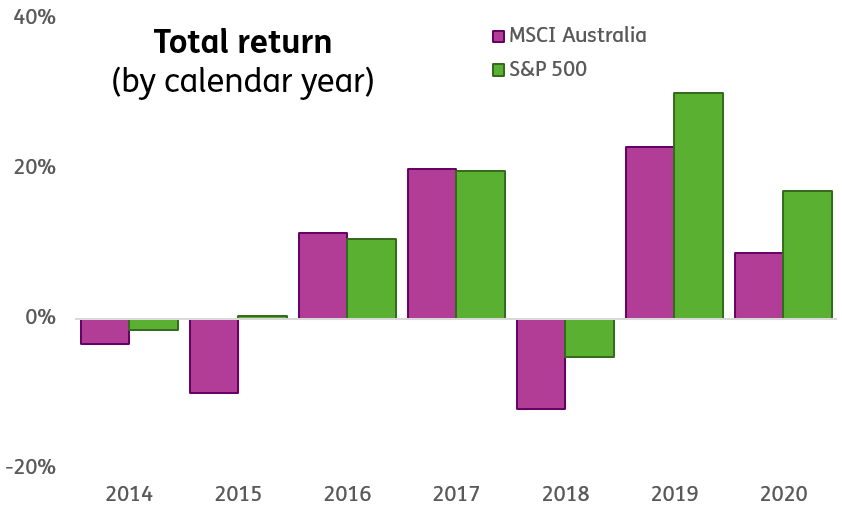 Might this same fate await the retail money now parked in Global Equity Funds? Are there quantitative strategies for mitigating the risk this might happen? That will be the subject of a future Quants Corner.