The Politburo Meeting on 27 March hinted at a big stimulus package ahead. The meeting stated that macro policy loosening should be stepped up to boost domestic demand and achieve the "Six Stabilities" (stable employment, trade, financial markets, investment, foreign capital, and expectations). Specifically, the central government will issue a batch of special government bonds (SGB), and the local government special bond (LGB) quota will also be enlarged. In addition, the meeting called for accelerated issuance and use of local government special bonds, speeding up the preparation and construction of large and important infrastructure projects and better implementing the reduction of taxes and administration fees.

We expect the government to raise the budgetary deficit to 3.5% of GDP from the previously 3.0% and lift the tax and administration fee target to CNY2.5tn from CNY2tn realized last year. Regarding off-budget items, we expect special local government bond issuance to rise to CNY3.5tn from CNY2.15tn in 2019. Meanwhile, the statement of the PBOC 1Q meeting on the same day also put a great priority on assisting a firm recovery of the real economy and pledged to increase support to SMEs and the private sector. PBOC wants to see the loan prime rate (LPR) play a more important role in lowering real funding costs.

Shortly after the Politburo Meeting, Premier Li Keqiang in a regular meeting of State Council said loan supply to the economy will be further expanded. Specifically, policymakers will make further targeted cuts to required reserve ratios (RRRs) for small and medium banks. The government will also increase the banks' re-lending and re-discount quotas by CNY1tn, to encourage the issuance of more loans at concessional rates to micro, small- and mid-size companies. We reckon government ministries will roll out more tangible measures in the coming weeks as this Politburo meeting gave them no choice but to do more. As far as the bond market is concerned, forthcoming issuance of SGBs has become one of the hottest topics there.

Last time SGBs were issued was in Q3 and Q4 back in 2007. The experience learnt there (chart 1) suggests there is a good chance the CGB yield curve may see bull-flattening and subsequently bear-flattening in the whole process of issuance, which may take 3-5 months to complete.

Probably, the anticipated bear-flattening of the CGB yield curve, if at all, would be partly caused by the accelerated supply of LGBs as there are great refinancing needs from June to November this year (chart 2). 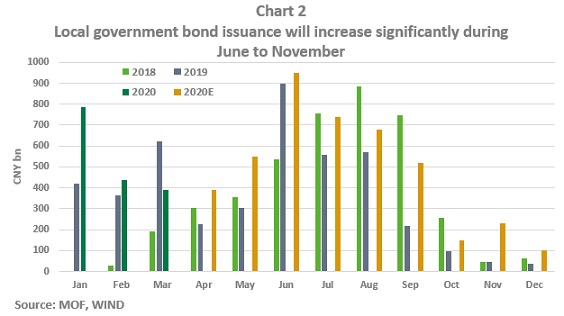