Xinhua News Agency reported the Politburo held a meeting on the economy on 30 July (Thursday). The CCP also held a meeting with non-CCP political parties and non-political representatives. President Xi chaired both meetings.

Compared to the meeting held on 17 April, we note some changes in wording were made to the remarks on monetary and fiscal policies in the 30 July meeting.

It is worth noting that the Politburo did neither mention reserve requirement ratio cuts nor interest rate reductions again in the 30 July Meeting. Instead, in talking about monetary policy, its tone was pretty in line with what President Xi expressed in a speech on 21 July (Tuesday). President Xi in the speech urged better implementation of aid packages for businesses, with steps to enforce a more proactive fiscal policy and more prudent and flexible monetary policy to ensure macro policies are more targeted and effective.

Obviously, the overall tone of the statement on the 30 July meeting was less dovish than that on the 17 April meeting. Though such change does not necessarily mean the policy stance will become less supportive than before, it to a certain extent suggests the central government is now biased in favour of targeted stimulus rather than broad-based economic support.

With the Politburo re-affirming President Xi's preference for a less dovish but more targeted monetary policy stance, we think it is difficult for the bullish sentiment on China government bonds to revive anytime soon. We reiterated our view that we think PBOC will just let liquidity remain ample enough for the market to absorb the new bond supply (chart 1). Meanwhile, we will likely see a rangebound China government bond market over most of the rest of Q3 (chart 2). 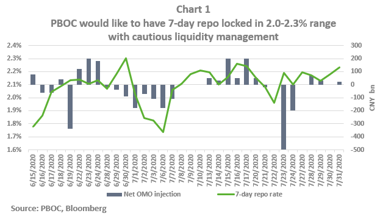